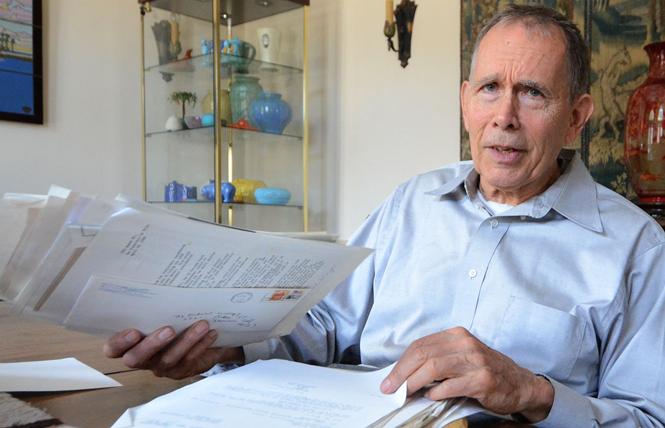 Richard Winger looked through papers from his 1986 campaign for California secretary of state. Photo: Rick Gerharter

Thirty-two years ago Richard Winger decided to mount a bid for secretary of state of California. The Libertarian Party candidate faced long odds, not only for being a member of a minor political party but also because he was challenging the three-term incumbent, March Fong Eu.

Nonetheless, he did secure the endorsement of the Oakland Tribune, now known as the East Bay Times. The newspaper wrote that Winger, "a politically minor but intellectually significant" challenger "casts reasonable doubt on Eu's policies and leadership."

It agreed with Winger, an advocate for improving ballot access for minor political parties, that Eu had done nothing "about California's scandalously restrictive ballot access laws." The editorial recommended readers vote for Winger, "if only to send a message to Eu."

It was a high point for Winger's campaign, which otherwise was largely overlooked by the mainstream press. Perhaps he would have received more media attention had Winger been public about his sexual orientation in his campaign material.

Winger didn't campaign as an out candidate. His news release announcing his candidacy, issued April 10, 1986, made no mention of his being gay or having a longtime partner, Jarrold Kunz, whom he has been with since 1973. (Winger, 74, and Kunz, 85, married in 2008 and live in the city's Marina district.)

Even in a political ad he ran a week prior to the election in the Bay Area Reporter, Winger did not mention his being part of San Francisco's LGBT community. And the city's LGBT newspaper did not include Winger in its coverage of that November's election results; Eu easily won re-election to a fourth term with nearly 67 percent of the vote, while Winger placed fourth with 1.5 percent.

"I didn't put it out there, but I didn't hide it either," Winger recalled in an interview with the B.A.R. in early July.

The one time he remembers mentioning his being gay was at a candidate forum held by a black political group in Fresno. It didn't cause much of a reaction, he said.

"When you run for secretary of state as a minor party candidate, you don't get invited to a lot of debates," said Winger, adding of the Fresno event, "there were so few people there, we just sat around and talked about ourselves."

Born and raised in the East Bay city of Antioch, Winger graduated from UC Berkeley in 1966 with a political science degree. During college he became interested in election law, particularly with rules governing how candidates gain access to ballots.

He has been a member of the Libertarian Party since 1972 but is not active with its leadership. Since 1985 Winger has published the monthly newsletter Ballot Access News, which he mails out to subscribers across the country.

He was never involved with gay liberation groups, so didn't have those alliances to talk about as a way to bring up his sexual orientation with voters. Nor did Winger think at the time that his being a gay man running for statewide office was all that remarkable.

"I don't think I consciously thought about it. I should have, if for nothing else than the historical aspect," said Winger. "So I regret that I didn't, but I knew others had run in the 1970s."

His good friend, Gayle Justice, in 1974 ran as an out gay man as the Peace and Freedom Party of California's candidate for U.S. Senate. Justice died at the age of 72 in 2012.

In 1978 the Peace and Freedom Party ran as its candidate for governor of California Marilyn Seals, "a secretary and lesbian mother of three," as a Venice newspaper described her in an item about her campaign.

An online history of the Peace and Freedom Party of California credits Justice as being the nation's first openly gay candidate for a U.S. Senate seat and Seals as the first out lesbian to run for governor of any state.

Over the last 44 years, no out LGBT candidate has won statewide elected office in California. The first to try to break through the Golden State's political "pink ceiling" as a candidate for one of the two major political parties is believed to have been Democrat Tony Miller.

A gay man and lawyer, Miller was appointed secretary of state in 1994 when Eu, who died last year, resigned to join the Clinton administration. He survived his party's primary that year but lost in November to his Republican opponent, Bill Jones.

A New York Times article in January 1994 reported that Miller was "America's first openly gay candidate for statewide office" but described him as "an unlikely pioneer: a man who has never waved a rainbow flag in a Freedom Day parade and is a stranger in the political clubs of West Hollywood and the Castro District of San Francisco."

Now gay state Senator Ricardo Lara (D-Bell Gardens) is looking to prove that California voters will elect an openly LGBT person to serve in the state's executive branch of government. He is running for the open insurance commissioner position, as the current officeholder, Dave Jones, is term-limited from seeking re-election this year.

Lara landed in second place in the June primary and is now competing against the first-place finisher, Steve Poizner, in November. A former Republican who previously held the insurance commissioner position, Poizner is running as an independent this year.

In a statement Lara's campaign released touting his primary win, it inaccurately stated that he was "extremely proud to be the first openly LGBTQ statewide candidate in a general election in California." It overlooked the fact of Miller's primary win 24 years ago.

The third-place finisher in the primary, Dr. Asif Mahmood, last week endorsed Lara in the general election. The Democrat had suspended his initial bid for lieutenant governor to instead run to be the state's insurance czar and hammered Lara in television ads.

If Democratic voters coalesce around Lara come November, then he has a strong shot of winning the race. In the primary, the two Democrats garnered 815,187 more votes than Poizner did.

Because current California election law does not allow Poizner to list his political party affiliation as "independent" on the ballot - he is listed as no party preference - Winger predicted that Lara would be the first LGBT statewide elected leader in California come November 6.

"I do think he will win because Democrats are so much more in the ascendency. The odds of Lara winning are 60 percent," said Winger. "Poizner being a Republican will not be forgotten. He will also be hurt by having his party affiliation listed as 'party preference none' on the ballot. It makes him look wishy-washy."

Commissioners up for reappointment
San Francisco Planning Commissioners Dennis Richards, the lone gay member of the oversight body, and Kathrin Moore learned last week that Board of Supervisors President Malia Cohen had nominated them for reappointment to the planning commission. Their terms both expire at the end of July, and the supervisors will now vote on whether they should serve another four years.

Two of the more pro-tenant members on the powerful oversight committee, Richards and Moore each have reputations for being tough critics of development projects, particularly those that impact tenants in rent controlled buildings. But they are also known for making suggestions to how projects can be tweaked to address their concerns and win approval rather than being staunch opponents who vote no.

Correction
Last week's column incorrectly reported when the Lambda Democratic Club of Contra Costa County will hold its early endorsement vote of lesbian Richmond City Councilwoman Jovanka Beckles in the Assembly District 15 race, as well as for the gay candidates running for city council seats this November in El Cerrito, Richmond and Dublin. It will be July 25. The LGBT political club will then hold another endorsement vote for all other fall races at its August 22 meeting.

The online version of the column has been corrected.