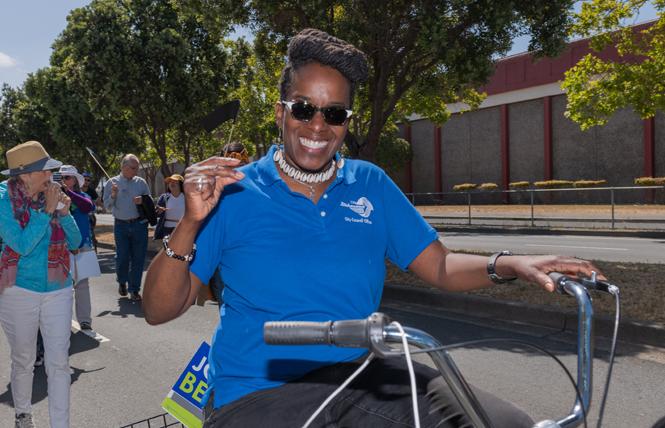 Since neither candidate secured their endorsements in the June primary race for the open 15th Assembly District seat, two East Bay LGBT political clubs will now vote on endorsing one of the two candidates moving on to the November election.

The two women are vying to succeed Assemblyman Tony Thurmond (D-Richmond), who is running to be elected state superintendent of public instruction in the fall. Should Beckles be elected to the seat, she would be the first LGBT member of the state Legislature from the East Bay.

None of the candidates on the June ballot, including the three out local leaders who were running, met the 60 percent threshold to secure an endorsement prior to the primary from the East Bay Stonewall LGBT Democratic Club. The Lambda Democratic Club of Contra Costa County had endorsed lesbian Berkeley school board member Judy Appel.

The Lambda Democrats will now vote on endorsing Beckles at the club's July 25 meeting. She will need 60 percent of the votes that night to secure the early endorsement, which the club only considers for LGBTQ candidates.

The Stonewall club is also planning to revote on an endorsement in the race. John Bauters, chair of Stonewall's political action committee, told the Bay Area Reporter the club is likely to send both candidates new questionnaires to fill out in order "to get us some new information."

A date for the endorsement vote has yet to be scheduled, as the club's board is expected to discuss timelines and deadlines at its July 18 meeting, said Bauters, a gay man on the Emeryville City Council who is currently serving as mayor. The threshold for securing Stonewall's endorsement is also 60 percent.

As the only out candidate to advance to the November election, Beckles now has a better chance of securing the support of both LGBT clubs. Since surviving the primary race, she has cemented additional LGBT endorsers, including Lambda PAC chair Jonathan Cook and lesbian at-large Oakland City Councilwoman Rebecca Kaplan.

"Jovanka has shown her deep commitment to the needs of our communities, and dedication to providing a better future for everyone, including those who have been left behind," stated Kaplan. "This Assembly District, including cities such as Oakland, Berkeley, and Richmond, deserves strong progressive representation to advance vital goals including healthcare for all, preventing displacement and providing affordable housing, and real justice and non-violence. Jovanka Beckles will be responsive to the people and uplift these needed voices in Sacramento."

According to Beckles' campaign, the LGBTQ Victory Fund contacted it to express support for her candidacy. But the national group, which focuses on electing out candidates to public office, has yet to officially endorse Beckles in the race.

"Our political team had an initial conversation with Beckles, but the Victory campaign board has not yet considered or voted on her endorsement," spokesman Elliot Imse told the B.A.R. last week.

Nor has she received endorsements from the two out candidates who did not survive the primary: Appel and bisexual East Bay Municipal Utility District board member Andy Katz, who also identifies as gay. Katz has not responded to the B.A.R on if he will make an endorsement, while Appel said she is considering doing so.

"I have not yet endorsed. When I do I will make an announcement," Appel told the B.A.R. in late June.

Equality California, the statewide LGBT advocacy group, dual endorsed Appel and Beckles in the primary and its PAC donated $3,500 to both candidates. It is unclear how much financial assistance it will direct toward helping elect Beckles in the fall.

Wicks, whose brother is gay, has picked up additional LGBT support since the primary. Gay El Cerrito City Councilman Gabriel Quinto, currently serving as his city's mayor, endorsed her a few days after the primary.

"When it comes to addressing the housing and homelessness crisis, fighting for a clean environment, and progressively representing our East Bay communities, we can depend on Buffy Wicks to deliver results in the Legislature," stated Quinto.

"Buffy Wicks has the ability to build strong coalitions and work collaboratively with diverse stakeholders to solve the challenges facing the East Bay," stated Moore.

Four years ago, the aforementioned Quinto became the first LGBT person to serve on the El Cerrito City Council. His election also marked the first time a person living with HIV had won public office in the Bay Area.

In December, he became the city's first LGBT and first Filipino mayor; the position rotates among the council members. He is also the first known HIV-positive mayor in the region, and only the second out mayor to serve in Contra Costa County.

He is now seeking a second four-year term on the council. Quinto, 57, will kick off his re-election campaign July 18 at Sasa Kitchen, 10350 San Pablo Avenue in El Cerrito. The event will run from 5:30 to 7 p.m.

Also that evening Cesar Zepeda, 37, will kick off his second campaign for a seat on the Richmond City Council. In 2016 he lost his bid to become the first out gay man elected to his city's council and only its second LGBT member, after Beckles.

In Dublin, United States Navy veteran Shawn Kumagai is seeking a seat on his city's council. The 41-year-old instructional design consultant for PG&E is now a master chief petty officer in the Navy Reserve.

He will launch his council bid at noon Saturday, July 21, at Alamo Creek Park. The city-owned park is located at 7601 Shady Creek Road. It is believed he would be the first known LGBT person elected to the council should he win the race.

The Lambda Democrats will vote on early endorsing all three of the council candidates at its July 25 meeting, then will hold another endorsement vote for all other races on the fall ballot at its August 22 meeting. Like Beckles, they will need 60 percent of the vote to secure the club's support. Kumagai is a former board member of the club and sought its endorsement, despite his running for office in a different county. (Dublin is in Alameda County.)

Although it is primarily focused on Contra Costa County, the club will consider backing LGBTQ candidates from neighboring counties if they seek its endorsement, explained Cook, its PAC chair.