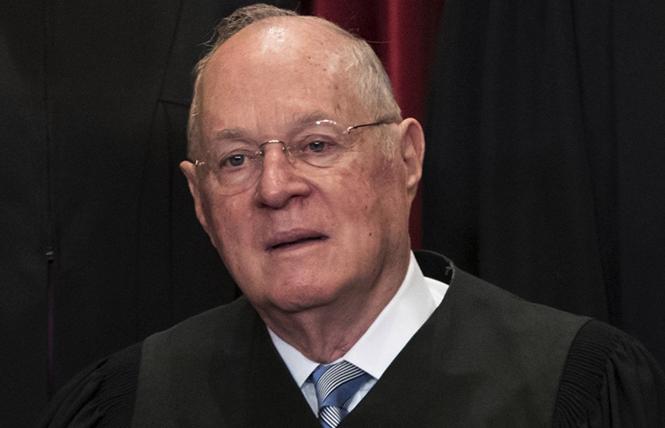 U.S. Supreme Court Justice Anthony Kennedy got played. When he announced his retirement last week, he gifted President Donald Trump the opportunity to tilt the court rightward for generations. Kennedy apparently felt "comfortable" retiring now, and reporting shows that he was reassured it was a good time by his son, who also happens to be one of Trump's most important bankers. Deutsche Bank, where Justin Kennedy rose to global head of real estate capital markets, lent Trump over $1 billion in loans when no other financial institution would take the risk. Kennedy fell for the praise heaped upon him by Trump. Whomever Trump nominates will be confirmed, and the future of significant precedents, like a woman's right to an abortion and possibly same-sex marriage, are in jeopardy. Trump wanted more than anything to shift the court solidly to conservatives, now he'll get his way, given Kennedy's role as a swing vote on many cases. When the president nominated Neil Gorsuch to the high court last year, he replaced fellow conservative the late Antonin Scalia, so the court's ideological balance was maintained.

At the forefront of the confirmation fight is abortion. The court's 1973 Roe v. Wade decision is in danger of being further weakened, or overturned altogether. CBS News tweeted last Friday that Trump "said he 'probably' won't ask his next Supreme Court nominee about Roe v. Wade," but he doesn't have to. All of the men and women who are on Trump's list are against abortion rights. The list was compiled during the presidential campaign with the help of two rabidly right-wing groups, the Federalist Society and the Heritage Foundation, and you can bet that they thoroughly vetted the candidates' views on abortion. Maine Senator Susan Collins, one of the last moderate Republicans in Congress, made the rounds on the Sunday talk shows and said a candidate who demonstrated "hostility" to Roe v. Wade would not have her support. Either she is naïve (unlikely), or is trying to have it both ways by supporting women's rights and the GOP agenda at the same time. That's not possible given this situation. Supreme Court nominees will not divulge their opinions in meetings with senators or at their confirmation hearing - that precedent of not revealing one's views on hot-button issues was set decades ago by Justice Ruth Bader Ginsburg. Collins has never voted against a Supreme Court nominee.

As for Senate Democrats, they can shout from the rooftops about the need to delay holding hearings until after the midterm elections. But they are in the minority and have no power. (Elections have consequences, remember?) Senate Majority Leader Mitch McConnell (Kentucky) doesn't give a rat's ass about his hypocrisy to schedule hearings this summer - after he had said in 2016 that President Barack Obama's nominee couldn't be confirmed until a new Congress was seated. The nominee will be confirmed, barring some unforeseen scandal, and we're going to get a far worse justice than Kennedy.

A Supreme Court appointment is for life. Kennedy, by all public accounts, is healthy. We wish he hadn't fallen for the faux charm of the president and would have stayed on the court. His legacy will not be respected by his replacement.

GLAAD's head-scratching move
GLAAD, the national LGBT organization that used to be named the Gay and Lesbian Alliance Against Defamation, now known only by its initials, issues a couple of reports a year on the state of out actors in film and television and holds glitzy "media awards" fundraisers in New York and Los Angeles. (Its San Francisco event was long ago relegated to mere "event" status, with no media awards to speak of.)

In a case of exceptionally bad timing, its president and CEO, Sarah Kate Ellis, had an opinion piece published in the Advocate last Wednesday morning calling for the LGBTQ community to support a constitutional amendment for equality - basically an Equal Rights Amendment like the one that failed back in the 1970s, except this one would include sexual orientation and gender identity. GLAAD would, Ellis wrote, embark on a multi-year public education campaign to increase support for federal LGBTQ protections, which would seem especially urgent under President Donald Trump, whose administration keeps rescinding what few federal protections we have. The goal may be laudable, but the likelihood that a constitutional amendment will pass is zero. Not only would it need two-thirds approval in both the Senate and House of Representatives, it would need affirmative votes by legislatures in three-fourths of the states (that would be 38) in a specified time period. Many states are currently controlled by Republican governors and/or legislatures; even if Democrats retake control of the Senate and House in the November elections (unlikely) there is zero chance Congress would approve an amendment.

Of course, within hours of the article's appearance online, the community had a much more immediate and crucial piece of news to absorb: Justice Anthony Kennedy announced his retirement from the U.S. Supreme Court. As we detailed above, Kennedy's replacement will almost certainly shift the court further to the right than it is already, and that will guarantee a challenge to substantial pro-LGBT rulings. Some settled law, like a woman's right to an abortion, could be overturned.

We're not falling for GLAAD's constitutional amendment ploy, and you shouldn't either. While there's nothing wrong with educating the public about the need for strong federal protections for LGBTQs, it's a blatant money-grab from donors at the expense of other LGBT civil rights organizations that really need the funds. Groups that are helping LGBTQs seek asylum, particularly in light of the recent Supreme Court ruling affirming Trump's travel ban, need resources far more urgently than GLAAD does. Legal groups representing undocumented immigrants and migrants at the border, including LGBTs, are in the fight of their lives - and need financial support. Agencies serving the transgender community are facing an uphill climb getting Title VII of the Civil Rights Act applied to trans people in prohibiting discrimination in court cases. They will receive little, if any, help from the Supreme Court.

GLAAD should immediately drop its misguided effort for a constitutional amendment. Instead of raising money for itself, it should go all-in for fundraising to help queer organizations that are doing the hard work on the ground in this time of resistance.