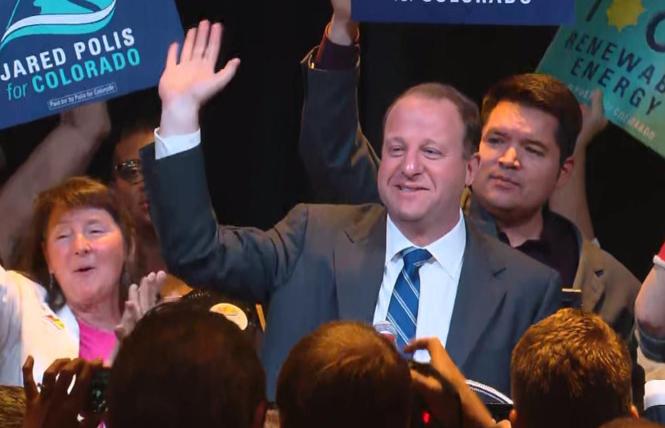 He'll now face Republican state Treasurer Walker Stapleton in the general election in November. If elected, Polis will become the first openly gay person to be elected governor of any state.

"While it is a historic and promising night for the LGBTQ community, primary voters chose Jared not because he could be a historic first, but because of his unquestionable integrity and positive vision for Coloradans," said Parker.

Polis was one of three openly gay candidates in gubernatorial primary races Tuesday. The other two did not advance.

Best known to the LGBT community as the most senior of six openly LGBT members of the House of Representatives, Polis is familiar to Coloradans as a wealthy businessman with a strong interest in improving public education and the use of renewable resources. Polis, an early developer of internet-based businesses, funded his campaign primarily with his own money - reportedly more than $6 million.

Polis, 43, had a tough race on his hands. At the statewide Democratic convention April 14, his chief opponent for the Democratic nomination, former state Treasurer Cary Kennedy, won 62 percent of the delegates, to Polis' 33 percent. The Denver Post reported that some participants in the assembly were afraid that Polis' being gay could "make Polis a harder sell to more conservative voters in November."

But Polis doubled down, running more than 3,000 television ads and spending more than all the other candidates combined.

Polis will go up against a pro-Trump Republican in November, seeking to replace Democratic Governor John Hickenlooper, who is term-limited. Four out of the last five governors have been Democrats. And in 2016 voting, Colorado voters preferred Democrat Hillary Clinton to President Donald Trump. One of its two senators and three of its seven U.S. representatives are Democrats.

Other races
In Maryland, gay gubernatorial candidate Rich Madaleno came up short in his bid for the Democratic nomination in Maryland. A state senator, Madaleno made his being gay a prominent part of his campaign. He ran a political ad in which he kissed his husband as an example of his willingness to "stand up to Trump." Madaleno and his husband also did a campaign video reading out loud many of the anti-gay messages he received as a gay candidate. But Madaleno's biggest challenge was his competition. He was up against better known figures, including former president of the NAACP Ben Jealous, a straight ally who won the nomination.

In Oklahoma, gay exotic animal keeper Joe Maldonado came in third out of three candidates seeking the Libertarian Party nomination for Oklahoma governor. Oklahoma news media depicted Maldonado as a somewhat unusual political candidate, noting that he sported a half-bleached blond hairstyle and six earrings in his campaign photo. He also expressed a desire to pardon all people convicted for non-violent marijuana crimes.

Finally, Chelsea Manning, a transgender woman who made a long-shot bid for the U.S. Senate, came up with only 5 percent of the vote against popular pro-LGBT incumbent Maryland Democratic Senator Benjamin Cardin in the primary. Manning is best known for having been convicted of leaking classified government documents to WikiLeaks. Just before he left office, President Barack Obama commuted her 35-year sentence, allowing for her release in May 2017.