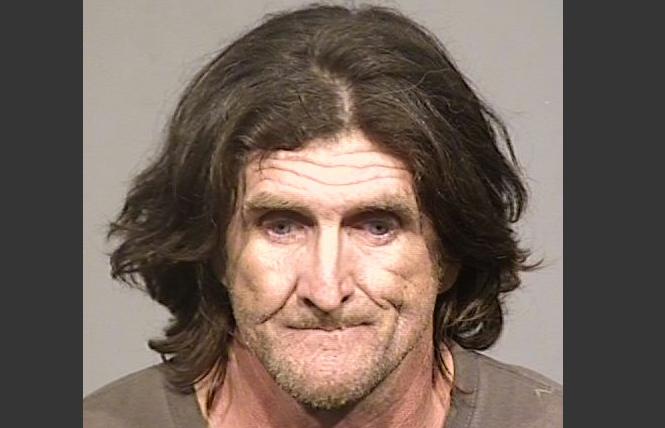 The Guerneville man who was arrested for threatening to kill LGBTs is once again charged with a felony hate crime after a judge reversed an earlier dismissal at a June 22 hearing.

In May, O'Sullivan pleaded not guilty to a felony hate crime charge for making criminal threats after threatening to "bomb the gay people in Guerneville" at a local Safeway store, authorities said. But Superior Court Judge Andria K. Richey dismissed the hate crime charge at his May 29 preliminary hearing citing a lack of evidence to convict him.
Prosecutors in the case then appealed this ruling, which was the topic of Friday's hearing at the Sonoma County Superior Court.

Superior Court Judge Jennifer V. Dollard ruled that there was an error of law in that Richey failed to hold O'Sullivan to answer for his threats.

"It was important for the court to look at the law carefully and the actual threats that were made," said Robert Maddock, the deputy district attorney prosecuting the case. "[Judge Dollard] ruled correctly that the original judge wasn't following the law correctly."

He continued, "It's not about whether the defendant carried out the threat or was going to carry it out. It's about how it affected the victim."

The victim was a gay male employee of a Starbucks located inside the Guerneville Safeway store off Highway 116. During the hearing, Maddock said the victim suffered nightmares and feared for his life. Maddock also reiterated the language used by O'Sullivan, which included, "I am going to kill all the motherfucking gays," and "I am going to blow you up you motherfucking faggot."

O'Sullivan was expected to appear in court Tuesday for a filing of information and will remain in custody on $55,000 bail. A jury is expected to be chosen soon for a trial on misdemeanor charges that O'Sullivan stole the rainbow flags.

"There is no error of law," he said. "Judge Richey specifically addressed the language used by [O'Sullivan], saying it was reprehensible and frightening, but that it doesn't rise to the level of a hate crime."

Beth Streets, a straight ally who started a Flag Supporters group that has been replacing the stolen rainbow flags, has been to many of O'Sullivan's court hearings, including the Friday hearing. She was happy that the hate crime charges were reinstated.

"I am very pleased that our D.A. did not agree with the prior ruling because this is serious," Streets said. "This sends a message to the whole community that there is no tolerance for hate."

As previously reported by the Bay Area Reporter, O'Sullivan was taken into custody by deputies from the Sonoma County Sheriff's Guerneville substation May 12 after the threats he made at the Safeway store. He was charged with making criminal threats, which constitutes a hate crime.

Judge Jamie Thistlethwaite ordered O'Sullivan to stay away from the unnamed worker and the Guerneville Safeway store itself, according to the Santa Rosa Press Democrat.

The sheriff's office began its investigation April 26, according to a statement by Lieutenant Eddie Engram on website Nixle.com, after a rainbow flag was stolen from the flagpole in Guerneville Plaza. Soon, the office became aware of threats to manufacture a pipe bomb.

Several of the rainbow flags have been taken from the plaza flagpole, including one after the B.A.R.'s initial article reporting the stolen flags.

As the sheriff's office's investigation progressed, deputies developed probable cause that O'Sullivan was a suspect for both the flag thefts and the threats. Sergeant Spencer Crum said the investigators connected the flag vandalism with the threats based on two different incidents.

"We saw O'Sullivan and another person on the plaza before the theft, then the other person covering the video camera, and at the end, when the camera was uncovered, the rainbow flag was gone," he said.

Then, when O'Sullivan allegedly issued threats at Safeway, investigators concluded the intent was specifically to injure members of the LGBTQ community. Crum said O'Sullivan told Safeway employees he wanted to "bomb the gay people of Guerneville."

History of petty theft
At the time of his May 12 arrest, O'Sullivan was already out on pre-trial probation for a petty theft case April 22, according to Sonoma County Public Defender Kathleen Pozzi, who has represented O'Sullivan in the past. Pozzi told the B.A.R. she has previously defended him for evading arrest, possession of methamphetamines, and for multiple violations of driving with a suspended license.