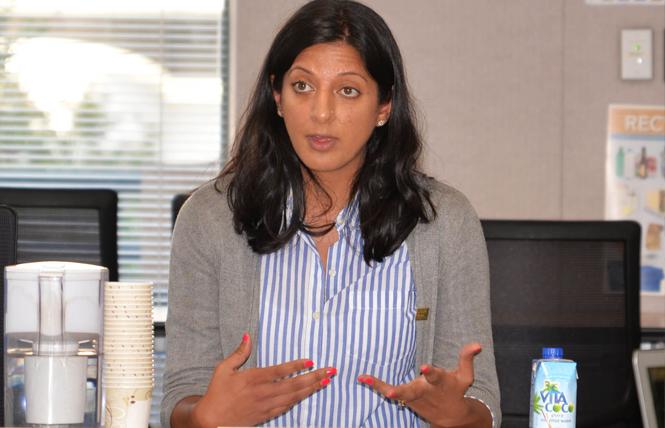 Collaborating with Santa Clara's Office of LGBTQ Affairs was one of the recommendations that came out of a preliminary report that looks at Mountain View's queer community.

The preliminary report about needs for LGBTQ residents was presented to the Mountain View Human Relations Commission earlier this month and received unanimous approval.

The initial report was the result of an earlier listening tour in the Peninsula city, and overseen by the panel's LGBTQ needs assessment subcommittee headed by Commissioners Arti Sharma and Julie Solomon.

The county Office of LGBTQ Affairs organized the listening tour.

At a June 7 meeting, the women received assistance from commission staffers Christina Gilmore and Audrey Seymour Ramberg, who were also present to answer questions from the commissioners and the public.

The first citywide report on Mountain View's LGBT community received a small sampling of respondents who met the criteria for both the adult and youth surveys, the women reported.

"Certainly, a common question from folks is, 'How many people are we talking about? How many people self-identify as LGBTQ here in Mountain View?'" said Solomon. "The short answer is that we really don't know, but we share here the best data that we have."

The adult survey received 33 responses, while the youth survey, conducted at Mountain View High School with the assistance of the school's queer youth alliance, generated 14 responses.

The adult respondents echoed many sentiments expressed at the listening tour that was held in January. Namely, that Mountain View is a safe and welcoming place for LGBT residents, overall. Respondents appreciated the progressive attitudes of their neighbors.

However, some participants reported experiencing poor treatment (13.8 percent) at local businesses, such as restaurants and stores, due to their sexual orientation or gender identity. Others reported being called names or insulted (10.3 percent) due to being LGBT.

The respondents didn't report any hate crimes in Mountain View. However, attendees of the listening tour expressed a need for easier reporting of hate crimes.

The participants expressed similar feelings about their workplaces. They appreciated the diversity and that it was safe. However, 3.6 percent reported being treated unfairly at work due to being LGBT.

The report highlighted areas where the city could improve, especially among seniors and youth.

There is a need for either LGBT-specific or welcoming services and a gathering space for the community. LGBT seniors, particularly, expressed that they didn't feel there were services for them in Mountain View.

"I don't think there's a lack of wanting to feel part of the LGBTQ community within the Mountain View community," Sharma told the Bay Area Reporter after the meeting. "I think there's a real longing to be able to have spaces and opportunities for members in the community to connect either with allies or people who identify."

Some of the adult respondents (27.6 percent) expressed a lack of visibility in general at community events.

More than 40 percent of the respondents reported going to events and services outside of Mountain View.

Mountain View's queer youth
LGBT youth wanted more formal policies at their schools for students and families focused on queer students' needs, especially gender-neutral restrooms and anti-bullying materials. More than half (64.3 percent) were dissatisfied with the restroom options, while only 14.3 percent reported being satisfied in the online survey distributed in May.

"There is a gender-neutral restroom, but there are a number of issues that came up about it," said Solomon. She noted students expressed distance and signage were issues regarding the bathroom, and that there was a number of other concerns about bathrooms raised by the students.

"This is really very timely for there to be input to the school on what some of these concerns are from some of the students," said Solomon, noting that the school might be undergoing renovations soon.

They also wanted to build a better relationship and trust with police, including an easier way to report hate crimes.

The report was mostly volunteer-driven, with some help from the commission's staff and the county Office of LGBTQ Affairs.

Potential solutions
Sharma and Solomon made several preliminary recommendations to improve the quality of life for LGBT adults and youth in Mountain View.

Seed grants to support programs was another recommendation, as was collaborating with the county's Office of LGBTQ Affairs for sensitivity training for all city staff and encouraging other community organizations to get training.

Sharma and Solomon also suggested the city's police department to collaborate with the LGBT office to conduct community outreach and dialogues about bullying, hate crimes, and other law enforcement issues.

The subcommittee members will conduct more research with community organizations to share the report and gather feedback in preparation for being placed on the Mountain View City Council's agenda sometime next year.

Community members offered support for the next iteration of the report and programs.

Menon, a bisexual woman who is a member of the hospital's Health Care Equality Initiative Committee, noted that isolation among seniors becomes more complicated with LGBT seniors who create an external family.

"I know how many seniors, especially, would be able to provide their input," she said.

Valarie Stinger, chair of the Palo Alto Human Relations Commission, thanked the commission for its help with Palo Alto's listening tour forum. She suggested that the commission combine forces by bringing the two cities together to benefit their LGBT communities.

Responding to Commissioner Nicole Isger's question about outreach, Sharma said the goal is that the report "may create other opportunities for points of connections," for recommendations.

"Someone has an answer or someone has a connection for us," she told the commission. "I think that's what we are looking for now."