Resist: The Ides of Trans March 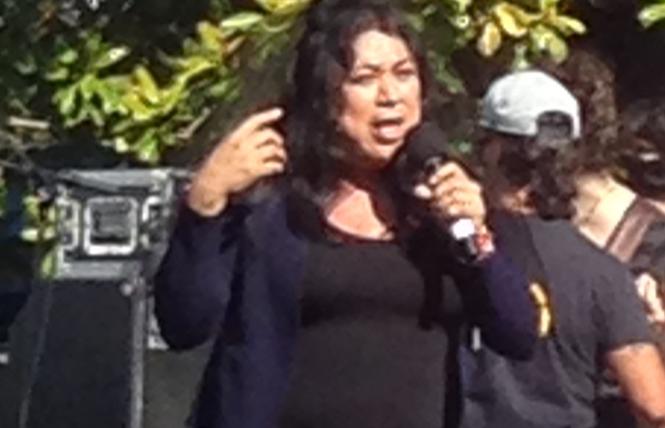 To Jennicet Eva Gutiérrez, the faults in our society lay not in our stars, but in our past failures, like those of Brutus, to recognize and confront tyranny when it appears. Before a cheering crowd of over 1,000 people at the 2018 Trans March in Mission Dolores Park Friday, June 22, she served notice that continued inaction was no longer acceptable.

"We cannot, as a community, tolerate abuses inside the prison industrial complex and we should not tolerate abuses happening in immigration detention centers under any administration," said Gutiérrez, a trans woman and community organizer with Familia Trans Queer Liberation Movement. "We're here to live openly and unapologetically and to send a strong political message: Down with white supremacy, down with racism and up with liberation."

Gutiérrez, 32, who made Out magazine's Top 100 list of queer activists in 2015, is best known for directly confronting President Barack Obama during a White House Pride Month reception that year about his administration's immigration abuses, including its decision to house trans women in male immigration detention facilities.

At the time, she received major pushback from the other queer attendees, most of whom, like the house they were in, appeared to be white. On the other hand, she's one of the few people that have noticeably caused a ripple in Obama's famously placid public demeanor.

Gutiérrez said she's fine with that.

"I didn't want to go [to the White House] to celebrate," she told the attentive crowd in Dolores Park as she recalled her meeting the president. "I wanted to go to make a political statement and to talk about the injustices and the treatment undocumented LGBTQ people are facing inside immigration detention centers across the country.

"I also was challenging the Obama administration to end all deportations and all detentions," she added.

Since 2015, Gutiérrez has been speaking and engaging in direct actions around the country in opposition to the federal government's crackdown on both undocumented immigrants and asylum seekers. Indeed, by the time the human cost of the regime's so-called zero tolerance immigration policy became apparent to many cisgender Americans in June as photos of crying toddlers made front pages, the trans immigrant community was already mourning the death of Roxsana Hernández.

"She died in ICE custody after fleeing violence in Honduras," Gutiérrez said, referring to Immigration and Customs Enforcement. "Facing all kinds of discrimination, she risked everything to seek protection; she was held and denied basic meds and, as a result, we lost her on May 25."

According to the Transgender Law Center, Hernández - who was HIV-positive - died of pneumonia after being detained in a facility where immigrants are often kept in freezing cells for days at a time.

To stop these sorts of atrocities from reoccurring, Gutiérrez said that trans activists need to broaden their focus.

TERFs invade Dyke March
For the first time in years, Trans Exclusionary Radical Feminists, or TERFs, made an organized attempt to disrupt the San Francisco Dyke March - which has been publicly inclusive of trans women for some time - on Saturday, June 23.

According to multiple reports, about 12 people carried transphobic signs, and one TERF reportedly beat a trans woman with her cane.

To their credit, organizers of the Dyke March quickly and publicly disavowed the TERF incursion via a Facebook statement and reiterated that the march would remain an affirming space for trans women. Even so, many activists believe that this sort of behavior is likely to reoccur unless those responsible are named and shamed - as has been happening on social media since Sunday.

Families belong together
In the wake of activists shutting down ICE facilities in Portland and elsewhere by direct-action occupation, immigration activists have called for nationwide demonstrations Saturday, June 30, to protest the regime's immigration policies. Those in the Bay Area have two options.

At 10 a.m., Families Belong Together San Francisco and a coalition of other groups will lead a march from Dolores Park to City Hall. The event is designed to be a child-friendly, non-confrontational march.

For those with more of a direct action bent, activists will gather from 11 a.m. to 2 p.m. at the Contra Costa County West Detention Center at 5555 Giant Highway in Richmond, the closest facility in the Bay Area that holds ICE detainees through a contract with the federal government. As the date marks the anniversary of the Immigration and Nationality Act of 1965, which forms the basis for modern immigration law, organizers are hoping for a big turnout. They are also requesting that participants who can do so bring baby books, diapers, and toys to be left behind at the facility after the action.