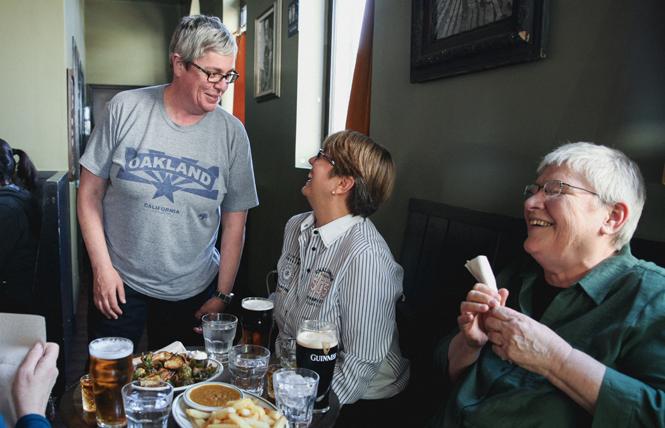 When Jackie Gallanagh moved to the Bay Area from Ireland in 1996, there were 17 Irish pubs in San Francisco. She tried most of them.

"A lot of them didn't feel like home to me," Gallanagh, a lesbian, said during an interview at Slainte, the Irish pub she opened April 29, 2017 near Jack London Square in Oakland. "The touristy ones were not very good."

Gallanagh lived in the city for five years before moving to Oakland, where she found the Irish scene was even more limited.

"There was no St. Paddy's Day, no Irish feel," she said. "The handful [of places] in Oakland didn't do it for me."

After working in real estate for a number of years, she had the money and opportunity to change that. Slainte (pronounced Slawn-cha), located at 131 Broadway, used to be an Indian restaurant. Gallanagh spent many months and close to $550,000 gutting the space, infusing it with warmth and Irish charm. The first thing most people will spot when they enter is a large painting of Oscar Wilde and, at the other end of the pub, two overstuffed chairs by a fireplace with a painting of James Joyce looking down on patrons.

"We completely stripped it," she explained, and installed handmade benches, tables, and new kitchen equipment. The bars were rebuilt, and Irish memorabilia - paintings, books, photos, and, of course, a dartboard - now adorns the walls. "Everything needed maintenance."

She won a lottery from the California Department of Alcoholic Beverage Control for her liquor license. "There were 25 available and I was number 16," she said, and paid the $14,000.

The result has been a successful resurgence of authentic Irish cuisine in the East Bay. Slainte celebrated its first St. Patrick's Day in March, with Gallanagh obtaining permits to close a portion of Second Street for a block party, complete with bagpipe players and Irish dancing girls. Many pints of Guinness and lots of Irish coffees were consumed by hundreds of people. The pub was packed even before the party started, as a soccer game was being shown on TV. About 3,000 people stopped by throughout the day, she said.

"It was a lot of fun all day long," Gallanagh recalled. "Everybody loved it."

There was no corned beef and cabbage served that day (or any day at the pub). As Gallanagh pointed out, ham and cabbage is traditional Irish fare. 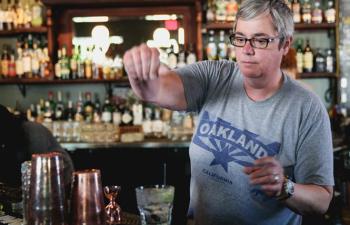 Early life, coming out
Gallanagh, 48, was born in Buncrana, County Donegal, Ireland, close to the border with Northern Ireland. She went to university in Derry City and earned a bachelor's degree in business. She said that she did not get to Dublin a lot, as she grew up on the other side of the country.

"The village was very close," she recalled, noting the town had about 4,000 people. "We socialized in pubs, and I worked in a lot of bars."

The closeness of the town made it hard for Gallanagh to come out to her family, which she did the year she moved to the U.S.

"Being gay was difficult there," she recalled. "I couldn't be myself. It kind of put pressure on me and despair.

"I came out to my mother. My brothers and sisters kind of knew," Gallanagh, who's the middle child among the seven children, said. Her siblings live in various parts of the world, including Queens, New York; Boston; Australia; and Ireland. "We're all very close."

Both of her parents have passed away.

She marveled at the fact that Irish voters passed a same-sex marriage referendum in 2015 by 62 percent.

"I thought it was amazing. I cried a lot. I was very shocked," she said. "Things do change. It was brilliant."

Before Gallanagh opened Slainte, she had a 14-year career in real estate, working with Team510 at Red Oak Realty. She still has her license, and her spouse, Chimene Pollard, continues to work in the business.

The couple, who've been together for 17 years, married in 2008, during the brief time that same-sex marriage was legal in California. (Proposition 8, the same-sex marriage ban that voters approved that November, was ultimately overturned by the U.S. Supreme Court on a technicality in June 2013.)

Pollard has been very supportive of Gallanagh's business venture. She's frequently at Slainte, grabbing a quick meal and sometimes helping out when it's crowded, like during the televised World Cup tournament, which packed the pub last weekend.

"It's been a most interesting journey," Pollard said in a recent phone interview. "Really amazing and much more magical than I anticipated."

Pollard, 49, said that Slainte has been welcomed by customers.

"I have a newfound respect for our little corner of Oakland," she said. "There's a huge Irish community in the East Bay that we didn't know existed."

Gallanagh said that like most Irish pubs, Slainte has live music Thursday nights and late afternoons on the weekends. The musicians, all session players, just show up, Gallanagh explained.

"You don't know how many musicians you're going to have," she said. "They travel to Irish pubs and know each other." 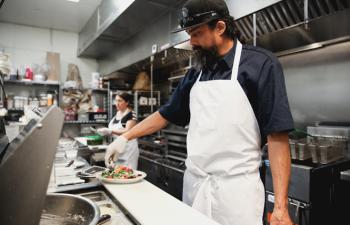 The food
Essential to any successful restaurant is the food, of course, and Slainte seems to be doing well in that department, partly on the strength of Gallanagh's own dishes.

Slainte employs about 17 people, mostly part-time. One of the critical full-time workers is the new head chef, Ted Moore, who started in March, the week of St. Patrick's Day.

Moore, 48, and a straight ally, has made the rounds cooking at various Bay Area eateries. He said that he was drawn to Slainte because of its atmosphere.

"Everyone's enjoying themselves," he said during an interview one afternoon before the dinner rush picked up, "The front and back of the house, and the customers, of course."
Moore said that he likes the challenge.

"I hadn't had the chance to work with Irish cuisine," he said, referencing two staples of the Irish diet, lamb and ham.

Menu items include traditional Irish pub fare, such as soda bread with Irish cheddar cheese, soup, and fish and chips. Then, there are the lamb sliders with garlic cheese crisps, sausage roll, Shepherd's pie, and a full Irish breakfast, which is served all day.

The bar has Guinness on tap, naturally, as well as other Irish brews, Irish coffee, and spirits.

Moore and Gallanagh are planning to add items to the menu soon. Moore mentioned a couple of sandwiches and a ham dish, depending on the season. He said that since he's been there, he's redone the Shepherd's pie to "what Jackie remembers from her childhood."

For her part, Gallanagh is happy that Slainte has been well-received. It generated favorable press last year when it opened, and so far, things are going well.

"It's been really good," she said.