Pride 2018: Sex sells, even from an old ice cream truck 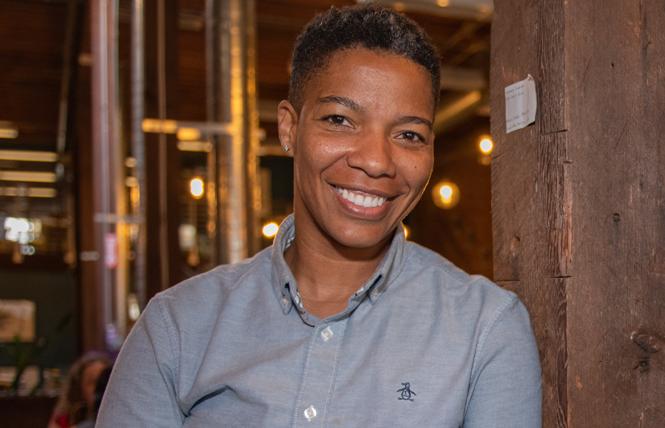 If you live in the East Bay and see an old ice cream truck in the neighborhood, it could be selling something other than frozen treats.

Nenna Joiner, an African-American lesbian who, seven years ago, gave up a corporate gig to go into the adult pleasure products business, recently purchased the 1970s truck and operates it as a portable pop-up store on the weekends.

"I wanted to do something that would make a real impact in Oakland," she said, "and while there have been ups and downs," overall Joiner said she thinks the company has become a valuable resource within the community.

While the open-minded Bay Area already has more than its share of sex shops, Joiner said Feelmore "not only has excellent products," but "we have also been a part of the revitalization of Oakland."

"Has it been hard?" Joiner asked in response to a question. "Yes," she practically shouted, "it has been hard."

A graduate of Florida A&M University in Tallahassee, Joiner, 43, moved back to California for a career in technology. She had a "very good job" with the Clorox Corporation, she said, "but I was dissatisfied."

Joiner was convinced that by opening her own business, she'd be "more in control of her own destiny" and would also be able to "affect change" in her community.

The idea for a so-called sex shop appealed to her.

"I'm glad I had no idea how difficult it was going to be because I might never have gotten started," she added. "I heard the word 'No' so many times that I thought no one would rent to my type of business."

Once she found a physical location where the landlord seemed open to having her as a tenant, her problems were far from over.

She scraped together the start-up funds to pay for the permits and renovation, with help from her mother, Sharon Jones, who has since passed away, Joiner said.

"My mother convinced me that I had nothing to lose and that anything I lost, I could always get back," she said. "That turned out to be true and was a real inspiration."

Feelmore's tag line, said Joiner, is "It's More Than Just Sex," and reflects her personal philosophy about the business.

"Sex is the guise to what we do, which is to ensure empowerment, education, and equality," she explained.

Once the business was on its feet in terms of profitability, Joiner said she was anxious to "spread the word" but did not want to open another brick-and-mortar location.

Earlier this year, Joiner decided she wanted to grow her business by opening a pop-up at San Francisco International Airport through its small business program, which enables companies with a revenue of at least $250,000 to rotate through annually.

But Joiner's business didn't qualify and her efforts to talk airport commissioners into lowering that figure were not successful.

Instead, she purchased the ice cream truck, complete with music, which she drives around the East Bay on weekends, selling merchandise from her store.

Next up on her to-do list: teaming up with a local ice cream vendor and keeping frozen treats in stock as well.

"People can't resist coming over to say hello when they hear the music and see us pulling up. That's the first step to meeting new people," Joiner said.