Resist: Standing up to the 'ammosexuals' on their own ground 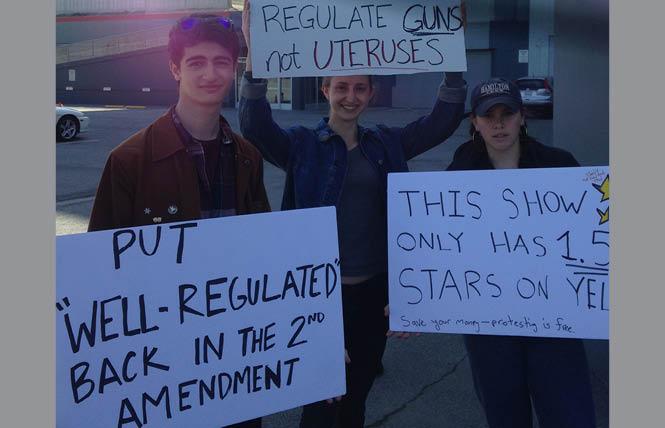 For years, state legislators have tried to end the gun shows at the Cow Palace in Daly City without success. Last weekend, a group of high school students tried a different tactic and, by doing so, served notice to attendees at the Crossroads of the West Gun Show that the days of community tolerance for their presence was at an end.

"This is a place where there aren't a lot of protests, usually," said David Gales, a junior at Lick-Wilmerding High School in San Francisco, while protesting the show Saturday, April 14. "I want to change that and to raise awareness that guns are being sold in our backyard."

San Francisco hasn't had a brick and mortar gun store since High Bridge Arms closed its doors in 2015, so the gun shows at the Cow Palace function as a pop-up bazaar of arms and ammunition minutes away from the city limits. That's a strong motivation for those in the area who buy several thousand rounds of ammunition at a time (as one man said he did on Saturday to Gales and the other protesters) to fight to keep the shows open, as there isn't a closer alternative to the city for them to add to their arsenals.

Moreover, as the arena is owned by the California Department of Food and Agriculture, it's historically been easier for those who fetishize firearms to block measures against the shows when they come up in Sacramento than they likely would be if a local government like Daly City had jurisdiction over the Cow Palace.

That's also why Gales, who uses gender-neutral pronouns, and their fellow protesters were there. Since the mass shooting at Marjory Stoneman Douglas High School in Florida in February, their tolerance for political gridlock on the issue of continued gun sales at the Cow Palace has been exhausted.

"In order to effectively further the movement, you need to maintain pressure in as many ways and in as many places as you can," Gales said.

Natalie Keim, a first-year student at Lick-Wilmerding with Gales, came because she wanted to start "a dialogue with people who don't necessarily agree with us."

"At the March for Our Lives [Against Gun Violence], people tended to have a similar ideology, which isn't bad because solidarity is important, but it's important to continue the dialogue," she said.

On Saturday, Keim, Gales, and their colleagues did exactly that, responding with grace and tact to each and every argument (most of which, during the time I was there, were either legally incorrect, factually false, or patently ridiculous, like the guy whose "solution" was to bar video game sales to anyone under 21 and for the media to stop reporting on mass shootings) thrown at them by the "ammosexuals."

As Johanna Castro, a senior at Oakland Technical High School who was in attendance, put it, "What better way to spend your weekend than standing up for what you believe in?"

Organizing against fascism
At 6:30 p.m. Thursday, April 19, Communities United Against Racism and Fascism will conduct its monthly meeting at New Valencia Hall at 747 Polk Street in San Francisco. Among other topics, the group will discuss creating an early-warning system for rapid action to counter threats from both local fascists and those who come to the area to start trouble. Admission is free (but donations are appreciated), and the space is wheelchair accessible.

Open mic for CAIR
At 4 p.m. Sunday, April 22, at 518 Valencia Street in San Francisco, the Council on American-Islamic Relations will hold "We are Not A National Security Threat: A Community Open Mic." The event, which takes place ahead of scheduled oral arguments before the U.S. Supreme Court on the administration's Muslim ban measures, is intended to give members of the Muslim community and their allies a space to push back against the demonization of their faith.

Interfaith conference on drone warfare
At 10 a.m. Saturday, April 28, at the Pacific School of Religion Chapel at 1798 Scenic Avenue in Berkeley, the Pacific School of Religion and the Interfaith Network on Drone Warfare will host the SF Bay Area Interfaith Conference on Drone Warfare. Speakers include Congresswoman Barbara Lee (D-Oakland), as well as Professor Marjorie Cohn, former president of the National Lawyers Guild. Admission is free, and lunch will be provided, but organizers are asking participants to register ahead of time at http://bit.ly/2l6iMqU.