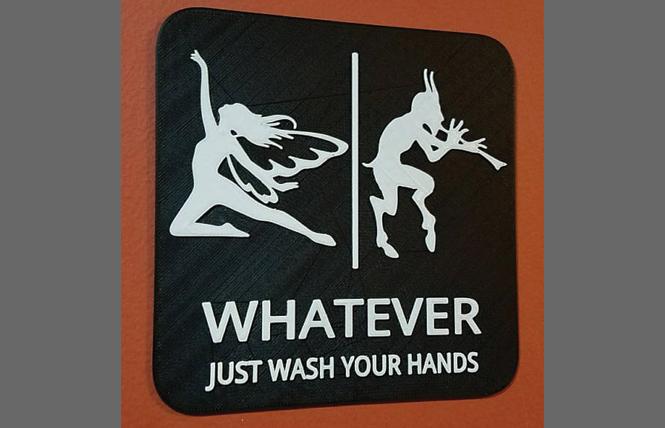 Being transgender in the late 2010s means you talk about restrooms. Indeed, it's a topic you end up having to revisit over and over again, with what has now been years of attacks on public accommodations laws for transgender people.

While we are setting renewed issues with transgender rights within the current administration - and I don't want to diminish what an enormous threat that is, with attacks from all around this president's cabinet - I do feel that transgender issues have become more accepted in the court of public opinion.

My feelings are further buoyed by the recent victory against Alaska's Proposition 1, which would have prevented people from using a restroom that did not correspond with their sex assigned on their birth certificate. This was rejected; making for one of the few times transgender rights has won at the ballot box.

It's a huge victory, and while it was members of the trans and larger LGBQ community spearheading it, it is a win that would not have happened without a lot of supportive allies. Before I go further, I want to make one thing clear: I have nothing but appreciation for people who stand up for trans rights as an ally. So many of us fight day in and day out, year after year, for our very survival, and it is heartening seeing people step up to lend a hand.

On the other hand - and you knew there would be one - sometimes allies don't quite see how their actions, well-meaning as they may be, can make trans people uncomfortable. This is when I go back to talking about restrooms.

Over the last few years, I've seen more and more examples of gender-neutral signage on restrooms. Much of it is OK, simply proclaiming that a facility is gender neutral, or even "all gender." Some go a step further, and this is where things get dicey.

I've been shown pictures of restrooms that are labeled "whatever," often with a "half man-half woman" info graphic image. I've even seen ones that include an alien figure among the others, or one that used a mermaid and centaur pairing.

These are all very cute - all serving to show that the owner of said establishment is trans-supportive - and all have problems.

You see, I'm not a "whatever." I'm not a mythological creature, nor do I come from beyond the stars - and by equating my very real need to use restroom facilities with fantasy or science fiction, you end up treating me as something strange and bizarre.

When I was a child, many others and I were brought up to "not see race," as if this would solve the issues of racism. It was a well-meaning concept akin to a "whatever" restroom, with similar issues.

Not having to "see race" is a very privileged standpoint, and means you get to be willfully blind to the very real issues of systemic racism that can pervade a society. It sounds good, but doesn't solve anything. Indeed, it may, in many ways, make things worse.

Saying "whatever" to issues surrounding transgender people and the use of public accommodations, let alone putting up cute images of extraterrestrials and fairy creatures, may seem like a great way to flag one's support of transgender issues, but it tells me, a transgender person, that my needs are singled out and made strange, and that my use of such facilities is, nevertheless, strange.

I don't want to be strange. I just want to go to the restroom in peace.

Now, again, I know that when such a sign was put up, the owner likely didn't think it would be such an issue. I'm sure that voicing such concerns makes me seem humorless and shrill. I get it. At the same time, part of being an ally should be concern for listening to those who you are seeking to ally with, and making sure that your efforts don't, ahem, alienate anyone in the process.

This may feel like such a small issue, and maybe it is - but with restrooms being such a big battleground that transgender people are facing, I think we'd all appreciate our allies standing up and showing up and doing the right thing for us all.

To me, it's time that the centaurs and mermaids go back to the land of the fae, the aliens get beamed up, and "whatever" goes away, forever. While we're at it, let's retire that half man-half woman info graphic that, quite frankly, only seems to apply to a particular Halloween get-up and not to any trans or nonbinary identity.

For me, I want a restroom that says, quite simply, restroom. If you need an image, use an info graphic of a toilet, and avoid any convoluted examples of men, women and so on.

Further, if you want to really show your allyship, why not place a sign next to that, stating that you support transgender people, and that they can use the bathroom that fits their gender identity. Spell out your choices and reasons, and truly stand up for us.

We're going to need our allies, because the defeat of Prop 1 in Alaska isn't the end of troubles for trans rights. There's still a long road ahead, and we're going to need all the help we can get - but I ask allies to listen and learn. We can all do a better job for every trans person out there.

Gwen Smith's restroom is tiki-themed. You'll find her at www.gwensmith.com.