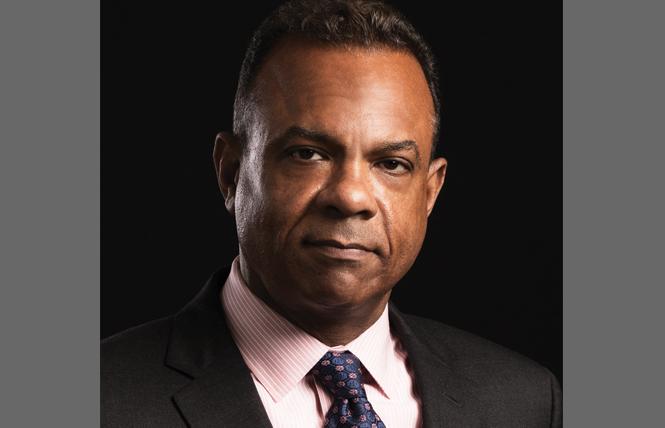 A gay attorney from San Francisco is the new leader of a judicial review panel responsible for evaluating those nominated by California's governor to fill vacancies on the state courts.

David W. Fermino, a partner with Kasowitz Benson Torres LLP, this week took over as chair of the Judicial Nominee Evaluation (JNE) Commission for the State Bar of California. For the last year Fermino has served as vice chair of the commission, which he joined in 2014.

The gavel will be passed to Fermino Friday, April 13, when the commission meets at the State Bar of California's San Francisco office to discuss and vote on the recent slate of candidates Governor Jerry Brown has nominated for appointment to the bench in California and other matters.

"I believe that the state of California and its judiciary are best served by judges who reflect diversity in geography, practice area, practice environment, gender, race, ethnicity and sexual orientation," stated Fermino. "Governor Brown has made enormous strides in shaping a judiciary that all Californians can take pride in, and I hope to work with whomever his successor is in continuing this worthwhile goal."

During Brown's second term in 1979, he nominated the first openly gay judge to the state bench. Since being re-elected eight years ago, Brown has continued to make judicial history by appointing the first gay and lesbian appellate court justices in the state and the first out judges to superior courts across the state.

As the Bay Area Reporter noted in March, there are at least 56 LGBT jurists now serving on the state's appellate and trial courts. And Brown, between 2011 and 2017, appointed 27 of them.

Now in his last year in office, Brown could make history again if he nominates one of the four out appellate court justices in the state or another LGBT attorney to the vacant seat on the California Supreme Court, which has never had an out jurist on it. According to Wikipedia, 10 states since 2003 have seen LGBT people serve on their supreme courts.

Brown could also name the first transgender appellate court justice in the country if he nominates Alameda County Superior Court Judge Victoria Kolakowski to fill a vacancy on one of the state's six appellate courts. Kolakowski, who is married to B.A.R. news editor Cynthia Laird, announced via Facebook last month that she had applied with the governor's office to be considered.

Before Brown can nominate Kolakowski or any other potential judge, Fermino and the other members of the JNE commission are required to grade their judicial acumen. Its evaluations of judicial candidates on whether or not they are qualified are then sent to the governor, who can choose to ignore its findings.

In order to see greater diversification of the state bench, a diverse judicial applicant pool is needed. As the JNE chair, Fermino plans to make it a priority to encourage members of the legal community, who have been traditionally underrepresented in the California judiciary, to apply to be a judge.

He also wants the commission to do a better job of being "as transparent as possible" about its process and "to provide information on what to expect from the commission should the governor request an evaluation," according to a statement about his becoming chair.

In 1987 Fermino graduated from Washington University School of Law. He clerked for now retired United States District Judge George N. Leighton of the Northern District of Illinois. Fermino served as a federal public defender in both San Francisco and Los Angeles before going into private practice.

Governor backs gay statewide candidate
Brown gave a significant boost Wednesday to gay state Senator Ricardo Lara (D-Bell Gardens) by endorsing his bid to be elected the first openly LGBT person to serve in the state's executive branch of government. Lara, a proponent of moving the state's health care system to a single-payer model, is facing a tough campaign for the open insurance commissioner position.

The incumbent, Dave Jones, is term-limited from seeking re-election this year, and Lara finds himself running against two well-financed candidates in the June 5 primary, where only the top two vote-getters will advance to the November general election.

Dr. Asif Mahmood dropped his bid for lieutenant governor to instead vie for insurance commissioner, while former Republican Steve Poizner is running as an independent to be re-elected to the position he held between 2007 and 2011.

In a statement released by Lara's campaign, Brown noted that Lara "has been a leader in the state Senate. He has fought to expand access to health care and to protect consumers and the environment. I'm glad to endorse him for insurance commissioner."

Castro eatery pours political punch
Aiming to drum up interest in the special election on the primary ballot for San Francisco mayor, gay-owned Castro restaurant Finn Town is serving up a drink menu inspired by "once and future" occupants of Room 200 at City Hall.

Mixologist R.M. Richards has created a special spring menu of cocktails named after former mayors and several of this year's mayoral contenders. Supporters of former supervisor and state lawmaker Mark Leno, aiming to be the first LGBT person elected mayor, can order up a "Marky Mark," made with tequila, mezcal, luxardo, and lime.

Backers of Board of Supervisors President London Breed, who briefly served as acting mayor upon the death December 12 of the late mayor Ed Lee, can nurse a "London Calling," a mix of botanical gin, fresh lemon, orgeat, and egg white.

Fans of District 6 Supervisor Jane Kim can sip "the Kimster," a concoction of Cynar, grapefruit, and bitters. Those voting for former supervisor Angela Alioto, who disclosed at a forum co-hosted by the B.A.R. that she doesn't drink alcohol, can sling back a "Straight from the Heart," comprised of aged rum, Pimms, ginger and fresh citrus.

Three former mayors who were supporters of LGBT rights during their terms in office are being honored with cocktails. Willie Brown's drink, dubbed "Da' Mayor," is a mix of vodka, Kahlua, vanilla, and espresso. The late George Moscone is the inspiration for the "Moscone Mule," made with vodka, lime, ginger beer, and Angostura bitters.

Gavin Newsom, now the state's lieutenant governor and a frontrunner in this year's gubernatorial race, is the lone politician with a nonalcoholic beverage named after them. Called "The Gavinator," a blend of citrus, house grenadine, and soda, it is a subtle reminder of Newsom's swearing off liquor during his mayoralty after his affair with a staffer was disclosed.

An owner of liquor shops, wineries, restaurants, and nightclubs through his Plumpjack Hospitality Group, Newsom has said in recent interviews he does drink, in particular wines.

The specialty cocktails have been rolled out with a new "Happy Hour Bar Bites" menu available from 5 to 7 p.m. weekdays. Finn Town is located at 2251 Market Street.