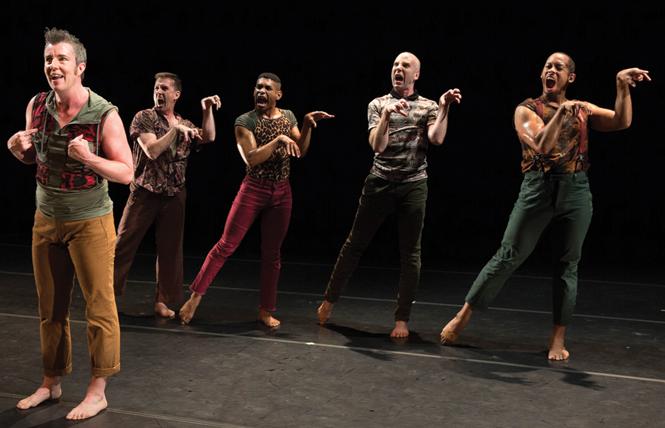 The cast of "Boys In Trouble," which makes its world premiere next weekend. Photo: Lydia Daniller

The new show "unpacks masculinity with unflinching honesty, from unapologetically trans and queer perspectives," Dorsey, a transgender man, said in an interview with the Bay Area Reporter.

Dorsey said that he created the production after two years working in communities across the U.S., including taking part in forums about masculinity, recording interviews, and teaching free dance workshops for trans and gender-nonconforming, cisgender, bi, and queer people on the masculine spectrum.

"The work is beautiful, urgent, and timely - especially as America is grappling with toxic masculinity, the trans revolution, the #MeToo movement, and renewed attacks on LGBTQ rights," he said.

Dorsey is the nation's first acclaimed transgender modern dance choreographer and one of only a few professional trans modern dancers in the U.S.

"We are also an all-queer company, and we position trans and queer bodies, movement and experience at the center of our work," he said. "Most modern dance is super hetero and gender-normative and gender-binary-subscribing. We are extremely unique.

"The work has an important message, but more than anything, the work is strong and beautiful," he added. "I incorporate story and text and language into all my dances, which means my work - unlike a lot of modern dance - is understandable, super-accessible and relatable. We dance human stories."

Performing with Dorsey will be four other dancers: Brian Fisher, ArVejon Jones, Nol Simonse, and Will Woodward.

"They are my close family as well as my collaborators," said Dorsey.

He said that he asked the dancers to look into their past.

"To create 'Boys In Trouble,' I asked my dancers to dive deep into their own experiences - hurts, traumas, hilarity, and healing around masculinity and gender. What they share in the show is exquisite. We perform full throttle - and I mean full throttle - dance, intimate storytelling, luscious queer partnering, and highly physical theater. There's both raw emotion and humor in the work."

Dorsey has been producing dance productions in San Francisco for the past 17 years.

The process of making this show "has been absolutely incredible," Dorsey wrote in an email to the B.A.R.

"The depth and beauty of the community engagement that went into creating this work really shines onstage," he explained.

"I always work in community to make my shows - but this project allowed me to go especially deep in community forums and self-expression workshops. The themes that rose up in these gatherings really drove my choices for the final work," Dorsey said.

After the San Francisco performances, the show will go on a two-year U.S. tour, with stops in Maui, Hawaii; Washington, D.C.; and Los Angeles. At each city, the company hosts a weeklong residency during which they not only perform, but host free community forums, lead trans-friendly dance classes and self-expression workshops, and other community gatherings.

Later this year, Dorsey will become the first U.S. transgender dance artist ever presented by the Joyce Theater in New York City, which will feature Dorsey's 2017 show, "The Missing Generation," June 20-23.

When he isn't on the road, Dorsey spends most of his time in the Bay Area, where he teaches, directs his nonprofit Fresh Meat Productions, and is involved with transgender arts activism. Dorsey's 17th annual Fresh Meat Festival of trans and queer performance will be held June 14-16, also at Z Space.

The new show, which was commissioned by six theaters in the U.S., was supported by the National Dance Project and National Performance Network and locally by the Creative Work Fund, in partnership with the San Francisco LGBT Community Center, the Queer Cultural Center, Kenneth Rainin Foundation, Phyllis C. Wattis Foundation, and the Fleishhacker Foundation.