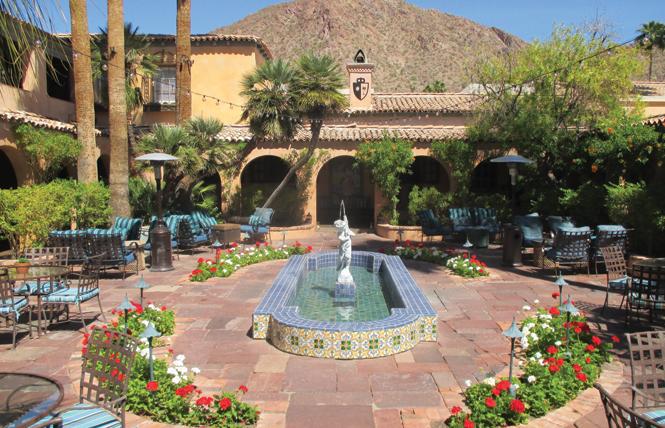 Phoenix just wrapped up a successful LGBT Pride event that saw a record crowd of more than 37,000. Tourism officials hope those Pride visitors checking out the city for the first time will make it a habit to return.

As you might have guessed, the early Pride is to avoid marching during the hot summer months. While it is too hot to hold a parade in the summer, it is a good time to be pampered at a luxury resort on the cheap. After Memorial Day, rates at most of the Greater Phoenix area resorts are about a third of what they would be during high season. Many offer deals that include food, beverage, and spa credits. The resort hotels are popular with locals on weekend staycations, so you can often find the deepest discounts on weekdays. Hotels undergoing renovations often will discount ever further. In previous years, some resorts have offered deals of less than $100 with waived resort fees and food and spa credits. You can stay at a very high-end hotel for less than a cheap hotel in San Francisco.

Besides lounging at the pool, there are plenty of things to do in Phoenix in the summer. The city has some first-rate museums, including the Heard Museum, dedicated to Native American art and artifacts; the Musical Instrument Museum, which opened just eight years ago and is the largest museum of its type in the world; and the Phoenix Art Museum, the largest visual arts museum in the Southwest.

At 1.5 million residents, Phoenix recently edged out Philadelphia as the nation's fifth largest city. The Phoenix metropolitan area (pop. 4.2 million) includes the popular tourist cities of Tempe and Scottsdale. Downtown Phoenix has seen a renewal as more millennials ditch their cars for the city's very walkable downtown that artfully combines new and old architecture with an old-west theme. Roosevelt Row in the heart of downtown is a great example of the city's revitalization. It is now one of the trendiest parts of the city, dotted with art galleries and murals. The neighborhood hosts a monthly first Friday self-guided art tour from 6 to 10 p.m. More than 70 art galleries and other art spaces are open to the public and free shuttle buses take visitors to different art districts and to the Phoenix Art Museum.

Even in the summer, an early-morning hike is doable most days in Phoenix - just be sure to bring plenty of water. One of the most popular hikes is Camelback Mountain. The name comes from its appearance that, from afar, looks like a kneeling camel. The mountain's two trails are Echo Canyon and Cholla, the latter taking longer but it is less steep and easier to navigate.

The Desert Botanical Garden is an attraction not to be missed in Phoenix. The 50-acre space is a spectacular collection of desert plants, including giant saguaros cactus plants that are only seen in the Sonoran Desert.

Tempe
Arizona State University is based in Tempe and is the largest public university in the country, with an enrollment of 72,000. Like most college towns, it supports an abundance of restaurants, bars, and concert venues. It is like a bigger Berkeley but with an old west flavor. It is also cleaner, with less visible panhandling and homelessness than the Bay Area. The city is on the Salt River and the Tempe Town Lake is a damned off section of the river that gives the city a beautiful backdrop, as well as lake activities like kayaking and paddleboarding.

Tempe is a very walkable city and it's easy to get around without a car. A light rail system runs from the Phoenix airport, through downtown Phoenix, Tempe, and Mesa. You can ride the light rail all day for $4. Tempe and Phoenix also have a bike-sharing program called the Grid Bike, similar to the Ford Bikes in San Francisco. If you are going to use a bicycle all day you can rent one at the Bicycle Cellar in downtown Tempe next to the city's transportation center. Tempe is one of the most bicycle-friendly places on earth with 175 miles of bike trails. One of the most popular is in Papago Park, just across the town lake from downtown. Tempe, Phoenix, and Scottsdale meet in that expansive park. Biking is one of the best ways to explore the park.

Tempe is home to ASU Gammage, a performing arts theater on the ASU campus. The Frank Lloyd Wright landmark building has a capacity of a little over 3,000 and regularly hosts Broadway plays and concerts. By comparison, San Francisco's Orpheum Theatre holds 2,200. The city is home to a host of world-class museums, including the ASU Art Museum and the Tempe History Museum. 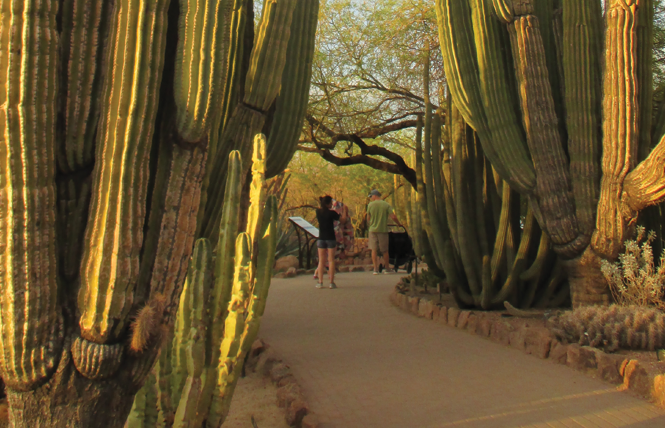 Scottsdale
San Francisco Giants fans have grown to love Scottsdale Stadium, the home field for the Giants' spring training. With a seating capacity of 12,000, the stadium is the third smallest of the 10 Cactus League stadiums, but as any Giants fan would tell you, the field's location couldn't be any better situated in the heart of Old Scottsdale.

Old Scottsdale is very walkable. It has the Lime Bike bike-sharing program that can be used when users download an app, sign up, and unlock the bike remotely. The system is easier to use than Grid Bike because you can lock up the bike anywhere. Grid requires you to lock the bike at a docking station.

Scottsdale has a population of 246,000 spread out over 184 square miles. The area around Scottsdale Stadium is known as Old Town Scottsdale and is a perfect combination of the feel of an old western town with tony restaurants, shops, and art galleries. Old Town Scottsdale is also home to BS West, a very popular gay bar. By the way, its initials are short for Breadsticks. It's named after a long-closed bar in New York City.

Accommodations
Built in 1956 in a classic mid-century style, the Hotel Valley Ho is one of the most beautiful, hip resorts in the Greater Phoenix area. The hotel is just a short walk away from the heart of Old Scottsdale, so it's very easy to get there without a car. The resort has a couple of pools, fitness center, spa, a bar, and one of Scottsdale's best restaurants, ZuZu.

The Royal Palms is one of Phoenix's most luxurious resorts. The Hyatt property has 119 rooms, but it has the feel of a smaller boutique hotel in large part because the rooms are spread out. As you enter the resort, you feel like you are walking into a picturesque Mexican hacienda with a stunningly landscaped garden patio. Amenities include a pool, spa, bar and the fabulous T Cook's restaurant.

Nightlife
The biggest concentration of LGBT nightlife is in Phoenix's Melrose District, on the one-mile stretch of Seventh Avenue between Camelback and Indian School roads. In recognition of the gayborhood, and to encourage neighborhood pride, the city installed an arch five years ago at Indian School and Seventh. Among the gay bars you will find along that corridor are Stacy's@Melrose, Boycott, Bunkhouse, Charlies Cruisin 7th, Off Chute Too, and the Rock.

Phoenix also boasts a lesbian bar. It's called the Cash Nightclub and Lounge, located about 4.5 miles southwest of the Melrose Seventh Avenue strip. It's a big space with a big patio and plenty of free parking in front.

For a great guide and map of Phoenix's LGBT nightlife, check out the map and guide in Echo magazine, the city's LGBT publication, at https://echomag.com/bars.

For more information on attractions and hotel suggestions in the Greater Phoenix area, check out the LGBT section of Phoenix tourism's official website, https://www.visitphoenix.com/lgbt/.