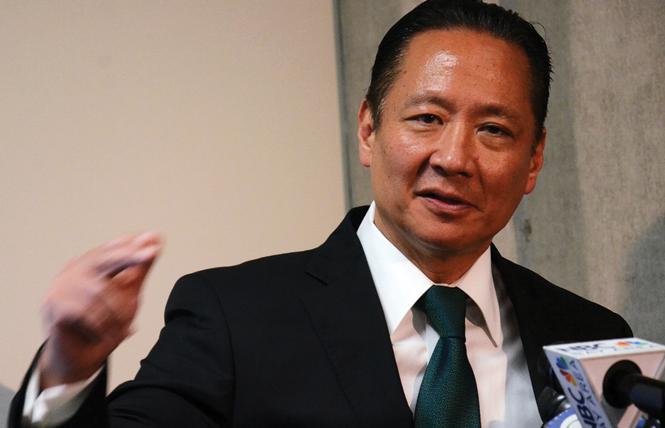 The frequent use of the word "faggot," and a culture of homophobia, racism, and bigotry were among a Muslim police officer's allegations of the San Francisco Police Department, which he made public at a news conference Tuesday, April 10.

The officer, who is remaining anonymous out of fear of retaliation, joined the staff of Central Station in June 2016. He filed a formal complaint in November with the SFPD's equal employment opportunity department, which forwarded it to the city's human resources department. He claims no action was taken. In January, the complaint with the city's HR department was signed and filed.

The complaint alleges he heard officers, "call other officers a 'fucking faggot' at least five times" between September and November 2017. During that time, the whistleblower also witnessed an officer say, "Go suck a fat dick you fucking faggot," to a rideshare driver who cut him off while driving. The officer described his experiences as "blatant racism and bigotry."

San Francisco Public Defender Jeff Adachi called the news conference and opened by saying, "We are here today to take a rare peek behind the blue curtain of silence of the SFPD."

This is not the first time Adachi has called out alleged wrongdoing by SFPD officers. And he said that he has informed Chief William Scott that he was going public.

"I believe he is committed to the reforms and believe he would not be proud of this kind of behavior from his officers," Adachi said.

After the instances of the use of the word "faggot" and homophobic rants in the department were discussed at the conference, Adachi said, "This kind of language is unacceptable and a direct violation of the city's employee training."

The complaint further describes the constant harassment the officer faced by others in the department surrounding his race and religion, including accusations of being a terrorist, being referred to as a "sand nigger," and having a flag with the word ISIS on it next to the words "go back" drawn on his locker.

Racism against African-Americans, strip club visits while on duty, and officers offering sex as a bargaining tool to female citizens who face possible criminal charges were among the additional allegations detailed in the complaint.

The officer has not filed a lawsuit against the department, but decided to go public with his complaints saying, "I have lost faith in the SFPD's internal investigation process." He claimed his confidential complaint was leaked by multiple sources to others in the department.

The San Francisco Police Officers Association released a statement Tuesday, saying it is "proud of the strong work ethic, tolerance, and diversity of our department and stand by our members as they serve and protect our community."

The statement claims that the department undergoes extensive diversity and cultural training and that "includes implicit bias training."

The department responded with a statement Tuesday afternoon that said it was made aware of the allegations in November and that there are three ongoing investigations involving SFPD and the city's Department of Human Resources regarding the complaints.

"The San Francisco Police Department takes the allegations presented today very seriously. SFPD will thoroughly investigate all alleged misconduct uncovered during these investigations which implicates any member of this department," the statement read.

The statement goes on to mention the recent steps taken to reduce similar instances in the past three years like the implementation of employee training programs, which include implicit bias and procedural justice training, electronic audits of communications, partnering with academic organizations to analyze vehicles stops and the use of force, and the launching of "Not on My Watch," a campaign that aims to put an end to prejudice and intolerance.

"We are committed to providing just, transparent, unbiased, and responsive policing and will continue to build and maintain trust with the communities we serve," the statement said.

The department also said it implemented recommendations from the U.S. Department of Justice after its own investigation directed by the DOJ in 2016 that followed protests over a deadly shooting by an SFPD officer.

This is yet another incident involving the ongoing scrutiny SFPD has faced in the last few years. In September 2016, Joe Babbs, an African-American officer, alleged racism in the ranks. Babbs turned over cellphone footage he took at the police department's Muni transit division that captured other officers calling black people "dirty" and admitting to pulling them over without probable cause.

In March 2016, four SFPD officers resigned after it was discovered they sent homophobic and racist texts to one another over a two-year period, including derogatory terms toward lesbians, gays, and transgender people.
At the end of the news conference, Adachi said, "If we want to be a 21st century police department, we must root out the officers who are engaging in this kind of conduct."