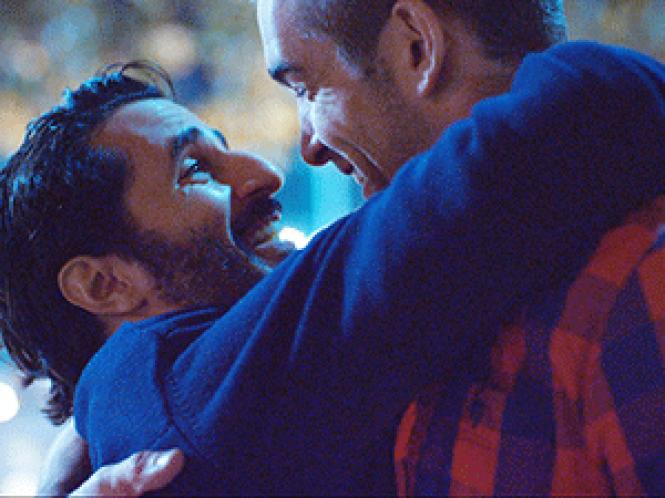 Queer Arabs will be able to see themselves reflected on the silver screen at the Pride Month film festival at the San Francisco LGBT Community Center.

The festival, produced by the Arab Film and Media Institute, will screen a series of short films about LGBTQ Arab communities, headlining with the popular "Breaking Fast," which will be shown along with "The Invitation," and "The Society" Thursday, June 22.

This is AFMI's first Pride Month screening, though its annual Arab Film Festival has been around for two decades. It's the second time the festival will show "Breaking Fast," a short romantic comedy about an Arab-American man and an American man who fall in love while breaking fast during the holy month of Ramadan.

The film first appeared in the festival's line-up in 2015 and drew 110 audience members to the showing, Serge Bakalian, executive director of the Arab Film Festival, wrote in an email interview with the Bay Area Reporter.

He said the film stood out from other films exploring LGBT issues because the main character was a practicing gay Muslim and wasn't struggling with the intersectionality of his identities.

"So much of the LGBT content we receive from the region is dark, and dealing with one repression or another," said Bakalian. "While here was a well-made film with its central character both a practicing Muslim and gay, and not struggling with either identities or having to reconcile the two. We were immediately into it.

"Audiences absolutely loved it, along with the rest of our LGBT content," continued Bakalian. "The film was a positive portrayal of an LGBTQI Arab man falling in love, not something we often see on the screen."

The festival has included LGBT-themed films since 2013, wrote Bakalian, a 41-year-old ally.

"It's always been important to show as many different experiences of being Arab, but this year we are all feeling a renewed attack on people's rights, and this makes it more imperative than ever to give voice and increased representation to the Arab LGBTQI community in our programs," wrote Bakalian, referring to AFMI's partnership with the LGBT center to present the films.

Dani Siragusa, 33, is a bisexual woman who is the associate director of development at the LGBT center and the only non-Arab on the festival's board.

"LGBTQI members of our community face additional discrimination from within and without simply based on their sexual orientation or gender identity," said Bakalian, recognizing the importance of this week's one-year anniversary of the massacre at Pulse nightclub in Orlando, Florida that left 49 people dead at the hands of an American-born Muslim, Omar Mateen. "I've always believed that film provides the means to counteract divisiveness, ignorance, and fear with empathy. LGBTQI Arabs are an integral part of the Arab community, and showing films by and about their lives helps us reaffirm that."

Siragusa hopes to make the Pride Month screening an annual event at the center.

AFMI is a new educational and incubator initiative of the Arab Film Festival to "nurture" new talent through its filmmaker services, according to the film series' announcement.

Tickets are $15 per person or $25 for a special "Date Night" package for two people. Tickets include a hosted bar and snacks. To purchase tickets, visit http://www.eventbrite.com/e/arab-love-afmis-inaugural-pride-screening-tickets-34836102721. All ticket sale proceeds will support AFMI's programs and services.

U.S. federal Judge Michael Ponsor has ruled that American pastor Scott Lively violated international law by aiding and abetting crimes against humanity in his efforts to demonize gay people in Uganda, but dismissed a lawsuit against him on jurisdictional grounds.

The Center for Constitutional Rights, representing Sexual Minorities Uganda, or SMUG, filed suit against Lively in U.S. federal court in 2012, hoping to hold the anti-gay pastor accountable for his actions in the African country.

Ponsor ruled June 5 that evidence showed Lively "aided and abetted efforts" to restrict freedom of expression of LGBT Ugandans, attempted to suppress their civil rights, and "make the very existence of LGBTI people in Uganda a crime."

"Anyone reading this memorandum should make no mistake," wrote Ponsor, who sits on the federal court in Springfield, Massachusetts. "The question before the court is not whether defendant's actions in aiding and abetting efforts to demonize, intimidate, and injure LGBTI people in Uganda constitute violations of international law. They do."

However, the case was thrown out due to "narrow jurisdictional ground" limiting extraterritorial reach of a federal statute. In a news release, the Human Rights Campaign said that Ponsor concluded that he did not have jurisdiction in this particular case.

Despite the case being dismissed, CCR and SMUG claimed victory.

"The court recognized that Lively worked to erase LGBTI Ugandans from civil and political life – a threat to Ugandan self-determination," Rutgers Law professor and CCR co-counsel Jeena Shah said in a news release. "The evidence surfaced in this case showed how Lively's persecutory efforts exploited a long history of Western homophobia in Uganda, beginning with British colonization."

Richard Lusimbo, 30, a gay man who was one of the chief witnesses in the case, was pleased with the decision, but disappointed that Lively wouldn't be held accountable for his crimes.

"I think that was the most important thing," Lusimbo said in an interview via Skype about Ponsor's statement.

"The judge is particularly very, very clear when he says persecution of LGBT people by Scott Lively broke international law," Lusimbo added, noting the broader implication of Ponsor's ruling beyond Uganda. "Look, you are not going to go around promoting homophobia or instigating prosecution of LGBTI people and think you're free just because you think you are protected by religion, freedom of expression, and everything. I think this is very important to us and also for the community internationally."

In its lawsuit, CCR claimed that Lively, along with other American evangelicals, colluded with Ugandan government officials and religious leaders to persecute Ugandan LGBT people under the Alien Tort Statute. The statute allows for non-U.S. citizens to file claims in federal court in violation of international laws.

However, Ponsor said that a 2013 U.S. Supreme Court decision limited the reach of that statute.

LGBT Ugandans' reaction to the judge's decision in the case has been slow, Lusimbo said, but he feels that the community will celebrate the ruling at Uganda Pride later this summer.

Although he won the case, Lively filed an appeal of the judge's ruling June 9 in an attempt to get what he called "prejudicial language" eliminated from the decision.

Out in the World: Ugandan LGBTQ activists respond to government attempts to further criminalize homosexuality
Sign up!