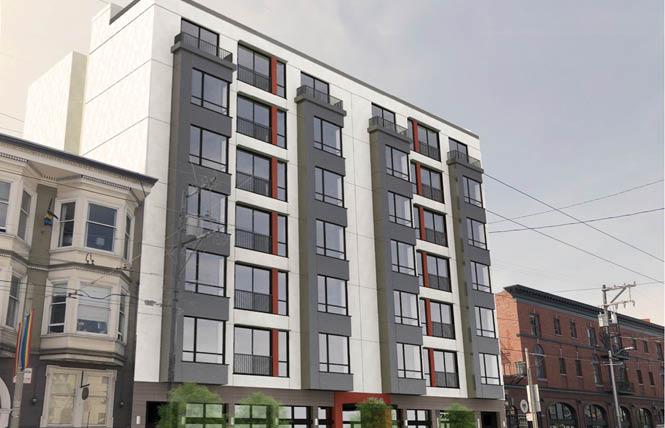 At its first meeting in December the San Francisco Planning Commission will take up the redevelopment project proposed for the Church Street site of the former Sparky's Diner. It is the first major housing proposal to move forward in the upper Market Street corridor of the city's Castro LGBTQ district in five years.

Initially set to be a 22-unit housing development, Bash is now seeking permits for a 24-unit building at 240-250 Church Street that would house the bakery business in a brand new 1,992 square foot retail space.

"We have a housing shortage in our city, and we should encourage construction of affordable-by-design homes," Bash had told the B.A.R. in June 2019.

Designed by Schaub Li Architects Inc., the housing will be a mix of 18 two-bedroom units and six one-bedroom units. Three of the units, a one-bedroom and two units with two bedrooms, will be sold as affordable and priced at 80% of the area median income. All of the residential units will have access to a shared roof deck, and although there is no vehicular parking provided, the project will have 30 bicycle parking spaces for the residential and retail components, according to the plans.

Due to the decision to now include the required affordable units on-site, the project is entitled to a 24.5% density bonus, or approximately 4,997 gross square feet, for residential uses. But in order to include the four additional units, the project is seeking a height waiver for the seven-story building, which is planned to be 74 feet, 11 inches tall.

After a November hearing was pushed back, it will now take place before the planning commission Thursday, December 2. City planning staffers are recommending the oversight body approve it, and the staff report indicated there has been no opposition registered against the proposal.

"The project would provide 24 dwelling units helping alleviate San Francisco's severe housing crisis," wrote planner Bridget Hicks in her report to the planning commission, noting the inclusion of the below-market-rate units on site and retention of the existing commercial tenant. "The proposed dwelling units are located on a transit heavy corridor and in a neighborhood that will benefit from the increase in foot traffic and consumers who will inhabit these units."

Other projects
The upper Market Street corridor has seen a number of mixed-used developments with housing above ground floor retail be built over the last decade. The newest will be the 44-unit condo project at 2238 Market Street by the Prado Group Inc.

Construction on Prado's project began right around the time that the apartment building at the corner of Market, Church, and 14th streets began leasing out its 60 units, eight of which were set aside as affordable. Local contractor Brian Spiers' decision to initially use San Francisco-based startup Sonder to oversee leasing of the furnished market-rate apartments was met with controversy. (Last summer, during the second wave of the COVID-19 pandemic, Sonder sued Spiers to exit its agreement early.)

In May, plans for the Lucky 13 site were submitted to the city that called for a new brick building with 70 units, 10 of which would be below-market-rate, as the pro-housing group SF Yimby noted at the time.

For more information about the project and how to watch the hearing, visit https://sfplanning.org/sites/default/files/agendas/2021-11/20211202_cal.pdf