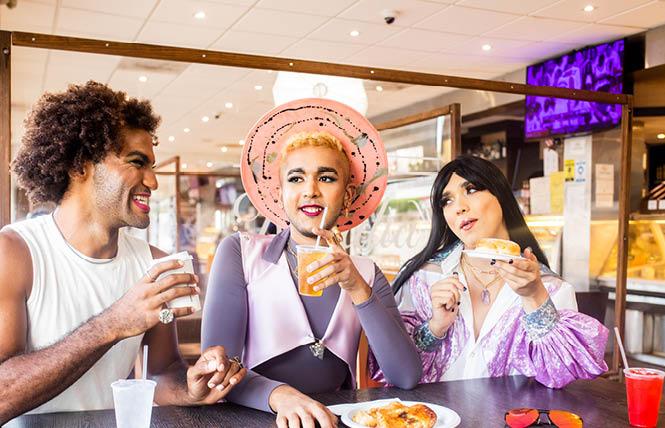 This year marks a new beginning for Puerto Rico's LGBTQ community following the deadliest year for transgender people in the U.S. territory in 2020.

LGBTQ Puerto Ricans are cautiously optimistic that the Caribbean Island is potentially turning a corner with two separate campaigns. Puerto Rico's new governor, Pedro Pierluisi, declared a state of emergency at the beginning of the year and established a new task force focused on gender-based violence. Then in the fall, Discover Puerto Rico announced its new LGBTQ tourism campaign, "Live Out," that places transgender and gender-variant travelers front and center.

Yet, he still desires for Puerto Rico to welcome LGBTQ travelers.

"I would love for Puerto Rico to not only welcome everyone [including] our LGBTQ+ people and gender-variant and nonbinary people, but we need to make it safe for people living here," Serrano, 47, said.

The news wasn't as devastating for Puerto Rico this year, which only suffered one killing of a transgender man on the island, according to the report's findings.

"We want to welcome all of our visitors to our destination so that they can feel safe, and they can enjoy all that Puerto Rico has to offer our visitors," said José E. Arana Rodriguez, the destination management company's marketing and special events manager.

If Discover Puerto Rico has its way, this tourism campaign will make traveling to the island safe for LGBTQ travelers, especially gender-variant vacationers.

The campaign will also be the second of its kind promoting tourism for potential gender-variant visitors, after Fort Lauderdale, Florida's transgender tourism campaign in 2014. Discover Puerto Rico announced the campaign at this year's International Gay and Lesbian Travel [LINK: https://www.iglta.org/] conference in Atlanta in September.

It plans a full launch in the coming months.

Albert Charbonneau, the 59-year-old gay general manager at Condado Ocean Club, who is a partner in the campaign, believes that Puerto Rico needs to be more "out there" for LGBTQ travelers. The hotel last month launched its own LGBTQ travel package, "Lush," to attract queer travelers [LINK: https://www.condadooceanclub.com/offers].

"Puerto Rico needs to be more out there because we are the gay center of the Caribbean," he said.

The B.A.R. made several attempts to obtain a comment from Pierluisi. He did not respond by press time.

Possible tipping point
Last year's tragic record was possibly a tipping point for Puerto Rico's LGBTQ community, which was reeling from heightened violence fueled by anti-LGBTQ attitudes and rhetoric spewed by former Puerto Rican Governor Ricardo Rosselló. He stepped down in August 2019 after weeks of intense demonstrations calling for his resignation due to leaked emails from Puerto Rico's Center for Investigative Journalism exposing homophobic and sexist chats between he and his top aides.

Serrano believes the uptick in violence and anti-LGBTQ rhetoric from government leaders and others was a backlash against the rights gained between 2013 and 2018. Serrano told the B.A.R. that the anti-LGBTQ rhetoric started ticking upward in 2019. He doesn't believe that anti-LGBTQ attitudes will go away anytime soon on the island. Homophobic and sexist beliefs and comments continue to plague some of Puerto Rico's government leaders, setting up an interesting potential legal quagmire: the U.S. territory's conservative lawmakers pushing for anti-gay bills in the island's conservative-majority assembly go against the island's laws and federal laws protecting LGBTQ people.

On the island, LGBTQ Puerto Ricans independently have fought for and won rights during the last 30 years, raising Puerto Rico's LGBTQ status to a score of 20, according to the Movement Advancement Project, for a rating of "fair." MAP monitors and ranks the progress of LGBTQ rights in the U.S. and its territories.

"Even though we are pretty much advanced, it has been very hostile. We have done it with very little support," Serrano said about the rights LGBTQ Puerto Ricans have gained.

He noted that Pierluisi is the sole supporter of LGBTQ rights in his conservative ruling New Progressive Party, and that the anti-gay legislators will be in their assembly seats long after the governor has been either voted or termed out of office.

LGBTQ community members are a part of Pierluisi's task force, which "gives us hope," Serrano said.

He's optimistic "that those community members can hold the governor accountable and his administration for doing the right thing," but the work has been slow, he said.

"We still have a long way to achieve full equality in Puerto Rico," he continued, stating he hopes the tourism campaign isn't about the island chasing the pink dollar. "Sometimes those campaigns feel a little cosmetic," he added.

On the bright side, he noted that the tourism campaign actively worked with Loverbar and its nonbinary owner Jhoni Jackson and hired transgender and gender-variant talent in front of and behind the cameras.

Set apart
Working with LGBTQ community leaders is only one aspect of the campaign that sets it apart from other destinations' queer tourism campaigns.

Since Discover Puerto Rico's launch in 2018, it set out to create an LGBTQ travel campaign that promotes educating travel professionals and companies about LGBTQ cultural sensitivity and inclusivity and working with local LGBTQ-owned businesses. The company started working with gay-owned diversity training company, HospitableMe in a beta program along with Discover Atlanta, and Hyatt to develop its queer diversity programs.

"The destination has always been an LGBTQ+ destination," said Arana Rodriguez, noting that gay travel guide GayCities named Puerto Rico "Destination of the Year" in 2018.

LGBTQ travelers have been vacationing in Puerto Rico for a long time, but the territory has not previously targeted the queer travel market, he noted.

"We feel very close to it not only as a market that has money to spend in the destination but also as the importance of the LGBTQ in our culture as Puerto Rican culture. It was a natural way for us to promote the destination to the specific market," added Arana Rodriguez.

Looking at future travelers, millennials and Gen Z travelers are more gender and sexually diverse, he said, noting recent studies that have signaled a shift in attitudes toward the "T" in the LGBTQ community.

"We have to be in the forefront of marketing in [promoting] the destination and welcoming the future visitors of the world," Arana Rodriguez said. "We want to position Puerto Rico as an LGBTQ+ destination that will welcome everyone."

"LGBTQ+ travelers often face added challenges — even more so when they are transgender or nonbinary. Education and visibility are key to making changes," said IGLTA President/CEO John Tanzella in a statement to the B.A.R., praising the Discover Puerto Rico for its commitment in educating its hospitality and travel partners to "provide safe and respectful service."

A Hyatt spokesperson added in a statement to the B.A.R. that the campaign's commitment "goes far beyond words, and is supported by real, meaningful action."

In a test run of the program, Discover Puerto Rico provided cultural training to boutique hotels, tour guides, restaurants, and other tourism businesses in six remote towns around the island, Arana Rodriguez said.

Yet, the campaign still needs to prove itself in Serrano's eyes. He wants to see more LGBTQ Puerto Rican activists hired to conduct LGBTQ training for businesses.

He hopes it will help his members — an estimated 40% of the chamber's 1,798 members are hospitality and tourism businesses — the 51-year-old gay man said about the organization, which has a budget of $450,000.

Arana Rodriguez agreed, stating that the pilot training was successful and focused on the fact that, "In the end, they are all human. They all just want to have a great experience and locally as Puerto Ricans we always want to welcome our visitors, we always want to give of our culture."

It is "a beautiful place to come," said Albert Charbonneau, 59, the gay general manager of the Condado Ocean Club, which partners with Discover Puerto Rico.

Out in the World: Coalition delivers 10,500 signatures to Biden administration to protect LGBTQ Afghans
Sign up!