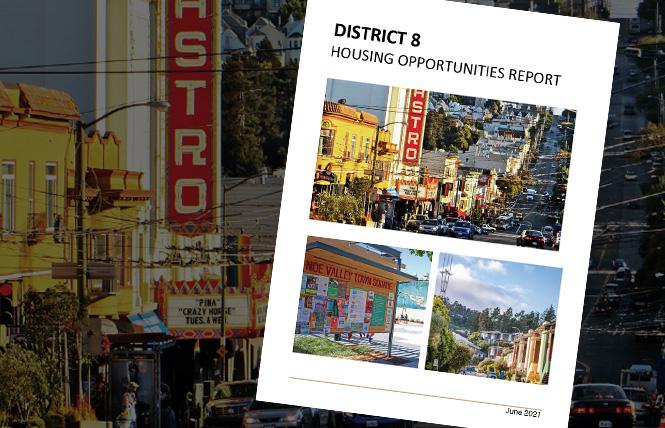 A new poll shows San Francisco residents are deeply dissatisfied with the city's failure to keep up with the growing need for affordable housing and are sick of real estate developers forcing working families from the homes they have lived in for years, replacing them with expensive condominiums. Meanwhile, a special report on housing in District 8, which includes the LGBTQ Castro neighborhood, makes clear that new housing is scarce there. As we report this week, "According to the report, 1,465 new housing units have been built in the last 10 years in District 8, representing 5.2% of the total new units citywide, and only 306 were affordable. Of the 527 new units approved to be built in District 8, only 146 are to be affordably priced, noted the report, which at 28% is below the city's 30% threshold for all new housing units being built to be affordable."

But the battle over housing takes many twists and turns. The Board of Supervisors recently rejected housing projects in the city. The most recent, a 495-unit apartment building on a valet parking lot at 469 Stevenson Street, provoked anger from some, while others praised the board's action as a stand against gentrification. The project would have included 73 below-market-rate affordable units. TODCO was against the project, which District 6 Supervisor Matt Haney, in whose district the project would have been located, supported. The eight members of the board voted to at least temporarily quash the project, claiming that environmental and seismic questions needed to be resolved. While the project wouldn't have displaced any residents, opponents argued that they feared gentrification as a result, which they said would lead to higher housing prices in the neighborhood. But here's the thing: while the majority of units would have been market rate, dozens wouldn't. Perhaps Haney should have fought for a higher percentage of affordable units; his predecessors, Jane Kim and Chris Daly, were adept at getting more affordable housing included in District 6 projects. TODCO is also not the only community organization in the area. In an op-ed in the San Francisco Chronicle, (https://www.sfchronicle.com/opinion/openforum/article/S-F-supes-say-they-killed-a-SoMa-development-to-16617794.php) representatives of the Mid-Market Coalition, a group of 11 resident-led and resident-serving organizations, wrote that their voice was "consistently minimized in the conversation about the proposed development, undermining a years-long effort by community members of SOMA and the Tenderloin to bring new benefits to our neighborhoods." The authors called on the supervisors to build more affordable housing in their own districts, which is something we've long advocated but seems to be going nowhere. Supervisors cave to opponents when affordable projects are proposed, and that's often the end of it. Residents across the city need to realize that the housing crisis — and it is a crisis — won't be adequately addressed if the city continues to reject projects and residents continue to oppose them.

But it's not only the lack of housing construction that's contributing to the housing crisis — evictions are once again returning to the city. We report this week on an Ellis Act eviction taking place at 3661 19th Street, adjacent to Mission Dolores Park. Seniors, LGBTQs, Asian Americans, and working class tenants who live there are all at risk. The 12-unit rent-controlled building is one of the largest to be targeted under the Ellis Act, a state law that allows the owner to evict tenants if they take the property off the rental market. This would displace many people and is another example of why the state law needs to be reformed.

We would like to see the supervisors commit to affordable housing projects throughout the city, and they should try to get as high a percentage of affordable units as possible in a mixed-use proposal.