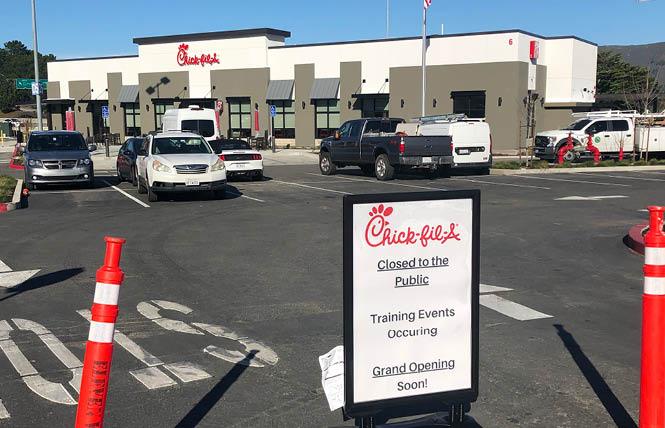 The Chick-fil-A Serramonte Center opens its doors November 18 at 6 Serramonte Center on Callan Boulevard outside of the shopping mall. It is across the parking lot from the entrance to Macy's and brings the number of Chick-fil-A locations in the Bay Area to 21, according to the company, as another East Bay location also opens Thursday.

Susanna Choe, the mother of three children with her husband, Philip, is the local operator of the new Peninsula location a two-minute drive outside of San Francisco. In an emailed statement to the Bay Area Reporter, she invited everyone in the local community to stop by in the coming days.

"Everyone is welcome at Chick-fil-A Serramonte Center. We're excited to serve the community in our new Daly City restaurant, and we look forward to providing a remarkable dining experience," stated Choe.

But most LGBTQ area residents are unlikely to be walking through the doors anytime soon. Many in the community refuse to eat at Chick-fil-A due to its past history of supporting organizations that promote discredited conversion therapy programs aimed at making LGBTQ people straight.

"It is sort of a poke in the eye, but I also think Northern California is not the right place for them," gay District 8 Supervisor Rafael Mandelman, the lone LGBTQ member of the San Francisco Board of Supervisors, said of the high-profile location for the new Daly City outpost.

Mandelman told the B.A.R. he has not heard of the company seeking a permit to open in San Francisco, and a company spokesperson did not respond to a question about its plans for expanding into the city. Under San Francisco's strict rules governing chain stores, it is unclear if Chick-fil-A could win approval to open in the City by the Bay.

Despite the company's continued growth in the region, so much so it now advertises on local television, Mandelman said, "My hope would be they would be terribly unsuccessful because the Bay Area would reject what they stand for."

He has never eaten at a Chick-fil-A and Mandelman said he has no plans to do so anytime soon due to the company's having "a really bad history of supporting anti-San Francisco values, anti-California values, and supporting people who are fundamentally hostile to queer people."

As the B.A.R. noted two years ago, the Atlanta-based company became a flashpoint in the controversy over same-sex marriage in 2012, when CEO Dan Cathy announced his opposition to it. The Cathy family donated millions of dollars to groups that promoted conversion therapy and opposed same-sex marriage.

In November 2019 Chick-fil-A announced it would no longer donate to two organizations — the Salvation Army and the Fellowship of Christian Athletes — that have routinely been criticized for their positions on LGBTQ rights. While the decision brought the company some praise among LGBTQ advocates, it came under renewed criticism this year after it was reported that the Dan and Rhonda Cathy Foundation had been donating nearly $6,000 a year to the National Christian Charitable Foundation, a vocal opponent of passing federal LGBTQ protections.

The company, which famously closes on Sundays in observance of its religious roots, is not the only fast-food brand whose donations have come under fire for undermining LGBTQ rights. As Business Insider noted in June the political action committees run by McDonald's, Wendy's, and parent company Yum Brands of Taco Bell, KFC, and Pizza Hut all have donated thousands of dollars to congressional Republicans who have voted against LGBTQ bills.

A spokesperson for Chick-fil-A told the B.A.R. the company "is proud to be represented by more than 200,000 diverse team members nationwide, and we strive to be a positive influence in our local communities. In celebration of the Chick-fil-A Serramonte Center opening, Chick-fil-A will donate $25,000 to Feeding America, where the funds will be distributed to partners within the greater Bay Area to aid in the fight against hunger."

San Mateo County Board of Supervisors President David J. Canepa, a straight ally who represents Daly City, years ago had raised objections when Chick-fil-A first started opening on the Peninsula. But he later dropped his opposition when the company revised its foundational giving and began donating to local food banks each time it opened a new location.

He told the B.A.R. the situation isn't ideal but he wasn't going to fight the chain's latest location, even if he has no intention of eating there. It might make sense, Canepa added, for the company to target its giving to nonprofits addressing hunger in the LGBTQ community.

"I know some folks in San Francisco, even here, are sort of disappointed and upset. For me, personally, the company's illustrious history is one that has just been horrible. We know that," said Canepa. "Are they choir boys and girls? Probably not, but at the end of the day they changed their policies and this is where we find ourselves."

Chain remains a target
Yet Chick-fil-A remains a target of LGBTQ advocates and their allies who continue to boycott it. Bisexual Livermore City Councilmember Brittni Kiick fielded irate phone calls from her constituents due to her voting in July in support of allowing the chain to open in the East Bay city.

The council's vote was unanimous since the company had met the local requirements it needed to in order to open. Nonetheless, Kiick recognized the "harm done to the LGBTQ community by Chick-fil-A" at the meeting and suggested that residents "vote with their dollars and get their fried chicken elsewhere," as Bay City News reported at the time.

Councilmember Bob Carling said at the meeting, "I don't see that Chick-fil-A's past practices and statements reflect the values that we hold in Livermore." Like Kiick, he said he "will not be participating in buying fried chicken at Chick-fil-A."

Speaking to the B.A.R. this week, Kiick said rejecting the chain's application would have been a "political stunt" and could have opened the door for local business owners to also have permits denied if a councilmember didn't like their political donation history.

"I had lots of private conversations with community members explaining as a councilmember, if I were to vote no on something like that as a political statement then it becomes a slippery slope," said Kiick, one of the organizers of the city's annual Pride event, which drew 5,000 attendees last month.

The increased tax revenue Chick-fil-A will bring in to the city's coffers Kiick wants to see help fund affordable housing in Livermore and other needed projects. She also directed those upset at Chick-fil-A to contact their state and federal representatives to demand they support laws banning conversion therapy.

In California, a ban on the practice with youth under the age of 18 took effect in 2014. But gay Assemblymember Evan Low (D-Campbell) has been unable to get state legislators to extend the ban to adults, while efforts in Congress to ban the anti-LGBTQ practice across the U.S. have stalled.

"Conversion therapy should absolutely be banned nationwide, but as a local elected official, I don't have control over those bans," said Kiick. "What we should be doing rather than fighting about Chick-fil-A is asking politicians in the Legislature and Congress to ban conversion therapy."