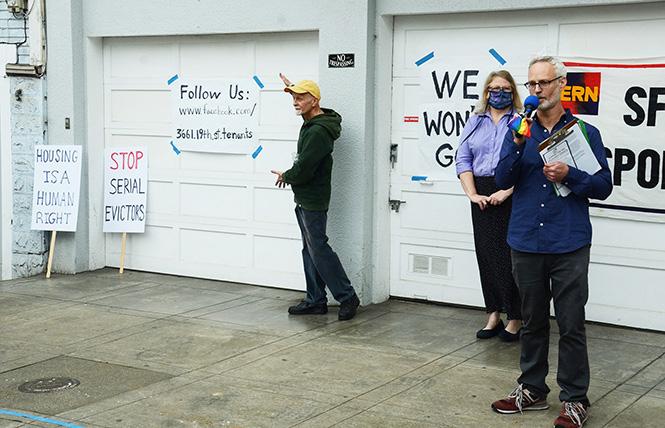 Larry Kuester, left, Lynn Nielsen, and Paul Mooney, all residents at 3661 19th Street, talk to supporters outside their home during a November 15 protest about their pending Ellis Act evictions. Photo: Rick Gerharter

Paul Mooney, a resident of a majority-LGBTQ apartment building next to Mission Dolores Park, was rallying the community against a plan to evict his entire building on November 15 when he himself was served with an eviction notice.

"A process server came to the rally to catch tenants and serve them," Mooney, 51, told the Bay Area Reporter the following day, saying another tenant was also served at that time. "I've lost so much sleep worrying about it and thinking where I might go. I don't want to leave. I love this city."

Yet Mooney might have to leave if the efforts of the Tenderloin Housing Clinic to fight the Ellis Act evictions at 3661 19th Street fail.

The building was bought by two limited liability corporations in August 2018: 3661 19th Street LLC (two-thirds) and VR Investments LLC (one-third). These, in turn, are owned by a group of trusts. The trustees of the former are Jeff Pollack, Edith Wong, and Pierre and Tracy Malak, and the trustee of the latter is Ryan C. Fong.

Mooney said that one of two previous owners, Jane Ballesteros of Pinole, had assured the tenants that "she was looking for a good buyer who'd take good care of us."

The other previous owner was Andrew Winchek, also of Pinole. Ballesteros could not be reached for comment. Winchek said, "I'm really shocked by their [the new owners'] behavior. I'm shocked," but wouldn't say more as of press time.

"That turned out not to be true," Mooney wryly added, saying that within months of buying the 12-unit, rent-controlled building, the new owners began the process of trying to evict its tenants.

"I believe it was about three months when we got our first Ellis Act notice," Mooney said.

Mooney and the other tenants want city officials to support state Assembly Bill 854, which would establish a five-year holding period before an owner can invoke the Ellis Act, extended to 10 years if they've done it before to another building (as is the case with these owners).

"We call on our elected officials to support this bill, which will help protect residents from real estate speculators," a news release stated. "We also call on the city to release the funds from Proposition I for the small sites program to purchase buildings like ours for affordable housing. Preserving existing affordable homes at a time of unhinged inequality and stopping real estate vultures from profiting off our displacement should be every electeds top priority."

Mooney said that after a year, the owners withdrew from the process due to technical issues with their eviction, formally called an unlawful detainer lawsuit. In October 2020, they tried again and the residents of the building were able to get a one-year extension due to age and disability concerns. However, that extension ran out last month, Mooney said.

Steve Collier, a gay man who is an attorney with the Tenderloin Housing Clinic, took the case.

"The Tenderloin Housing Clinic represents tenants in no-fault evictions, especially Ellis Act evictions, so they were referred to us and we took it on," Collier said. "We'll try to get the case thrown out based on non-compliance with the rent ordinances in the Ellis Act."

Collier told the B.A.R. that the LLCs are involved individually in other unlawful detainers throughout the city.

For example, the owners of 3661 19th Street LLC also own a property on Castro Street through a different LLC, according to Collier.

Pollack, Wong, and Fong did not respond to requests for comment.

On behalf of the Malaks, Pierre Malak declined a request for comment.

Mooney wasn't the only tenant to be served at the November 15 news conference. Larry Kuester, a 67-year-old gay man who has lived in the building since 1990, also received a notice.

Now retired, Kuester told the B.A.R. he may become homeless if he's evicted. He said that having once worked for the San Francisco Department of Public Health, "I've seen what can happen when the safety net fails."

Kuester sweeps in front of the building three times a week.

"I've been doing that at least 10-15 years. It's just my way of trying to keep the neighborhood nice," he said. "I'm not sure if you've been to Dolores Park on the weekends, but it's kind of party central, and there's a lot of trash that blows in the neighborhood from the party. So it's a constant struggle."

The property contains 24 bedrooms in its 12 units, according to a news release from Mooney. Ten of the units are occupied and six house LGBTQ tenants.

The "mix of senior, LGBTQ, Asian American, and working class tenants" have lived in their homes at the site an average of 20 years, Mooney said. Mooney is close to the average himself, having moved to the building 18 years ago.

It is Mooney's third residence in San Francisco since he moved to the City by the Bay in 1999 at the age of 29 from New York.

"I love my neighborhood — I go to the Castro all the time. I love this city and the sense of community it offers gay people like me," Mooney said. "I got very involved in the gay community when I was younger."

Longtime B.A.R. readers may remember Mooney as the spokesman for the community group And Castro For All, which was responsible for the boycott of gay landlord and bar owner Les Natali's Badlands after allegations that he discriminated against Black people seeking to patronize the establishment. A 2004 report by the San Francisco Human Rights Commission found that Badlands was discriminating against African Americans, but the findings were never official because the HRC executive director at the time did not sign off on the staff report. Natali and the complainants eventually reached a confidential settlement. Badlands closed in 2020, though a new bar is slated to open at its location.

After his work with And Castro For All, Mooney became involved in the Harvey Milk LGBTQ Democratic Club, which was one of the organizations represented at the November 15 rally.

The Milk club did not respond to a request for comment November 16.

Gay District 8 Supervisor Rafael Mandelman was also at the rally. A 40-page report Mandelman commissioned to examine the various housing issues confronting his district noted that the city's small sites program has not been used as effectively as it could be in District 8, as the B.A.R. reports this week.

"We are seeing an uptick in evictions as emergency tenant protections expire, with longtime residents being pushed out of their homes and out of San Francisco at an alarming rate," he stated. "The eviction of seniors, queer people, people of color, and working class San Franciscans from this building is a glaring example of why we need to strengthen our housing preservation programs in San Francisco and reform the Ellis Act at the state level."

Kuester said he doesn't know what he'll do if Collier isn't successful.

"It's devastating," he said.

Updated, 11/19/21: This article has been updated to state the protest was November 15 and to correct that it's the same owners, but through a different LLC, that own a Castro Street property.

SF tenants deliver 'coal' to landlords suing to evict them
Sign up!