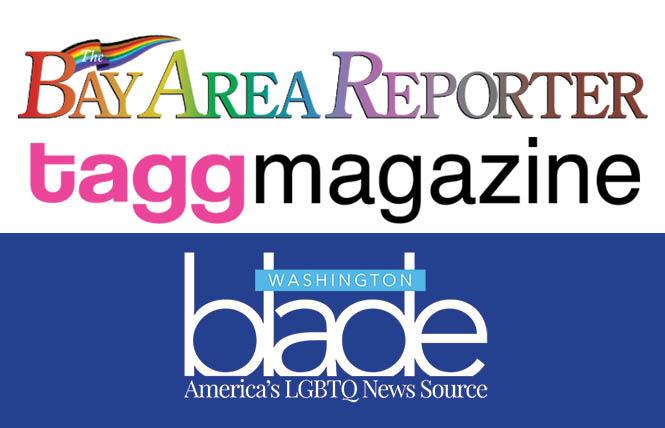 The Bay Area Reporter, Tagg magazine, and the Washington Blade are three of the six LGBTQ publications involved in a new collaborative funded by Google. Photos: Courtesy the publications

The Bay Area Reporter will be one of six publications in a new LGBTQ media venture that's being initially funded by the Google News Initiative Innovation Challenge.

Local Media Foundation announced November 16 the launch of Word Is Out: The Queer Media Collaborative. Funding from Google News Initiatives is $200,000, according to Nancy Lane, CEO of Local Media Association, which will serve as the managing partner for the initiative. Lane told the B.A.R. that the amount is the maximum for this current round of funding. Google also announced the collaboration that day.

B.A.R. publisher Michael Yamashita said he was glad the paper will be part of the project.

"It's an honor to be one of the founding members of the Queer Media Collective and I'm grateful for the guidance of the Local Media Association and the financial support of the Google News Initiative Innovation Challenge," Yamashita stated. "Our eventual goal is to collaborate on a foundation for cultivating LGBTQ journalism and ensuring sustainability for LGBTQ news outlets across the country. No one can effectively report on the issues that affect LGBTQ people better than LGBTQ news professionals themselves, especially during these politically and economically challenging times."

LGBTQ+ publishers participating in the collaborative said they have been left out of industry labs and initiatives during a time when they need the help the most, a news release stated. The Queer Media Collaborative, or QMC, seeks to change that with a first-of-its-kind business collaboration that will focus on business sustainability and producing great journalism, the release stated. Many publications saw a steep decline in advertising revenue when the COVID-19 pandemic started last March.

"We are so excited about this unique collaboration for LGBTQ+ media," stated Ebone Bell, owner and editor of Tagg magazine, a national Black queer woman-owned publication that is part of the project. "This group of media has often been left out of national partnerships, and is new to the philanthropic side of journalism funding. This provides a great opportunity to uplift and transform legacy and new LGBTQ+ media."

Word Is Out marks the seventh news industry collaboration incubated by LMA and LMF. The collaborative will build on the successful model of Word In Black, which is made up of 10 leading Black publishers in America. Word In Black also received funding from Google News Initiatives. Lane said that initiative received $300,000, which was the maximum for that round of funding.

In addition to the B.A.R. and Tagg, the other publications will be: the Dallas Voice, the premier media source for LGBTQ Texas; Q Voice News in Long Beach, California, an online publication; the Washington Blade in Washington, D.C., a weekly LGBTQ publication; and the Windy City Times in Chicago, an LGBTQ newspaper and website that covers Chicago and its suburbs.

Publishers are in the early stages of planning and setting goals, the release stated. The group plans to hire a part-time project manager and will focus on audience listening surveys to better understand the needs of the LGBTQ+ community. Funding from Google will cover the initial research and the role of the project manager.

The collaborative will launch a national website and newsletter, supported by a membership model; sponsorships; branded content; and journalism funded by philanthropy. The publishers will look to expand to other LGBTQ+ publishers as funding allows, the release stated, but lessons learned will be shared with all.

LMA brings all media together to share, network, collaborate and more. More than 3,000 newspapers, TV stations, radio stations, digital-only publications, and research and development partners engage with LMA as members or constituents of its programs. As a 501(c)(6) trade association, LMA is focused on the business side of local media. Its programs and labs focus on revenue growth and new business models. LMA helps local media companies develop their strategies via cutting-edge programs, conferences, webinars, research and training.