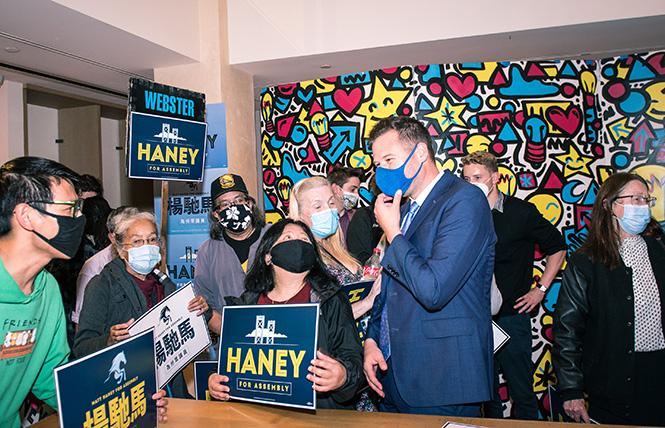 Signaling the importance of the LGBTQ vote in the special election for San Francisco's open 17th District Assembly seat, two of the top contenders have opened their campaign headquarters in the heart of the city's Castro LGBTQ district.

Moved into the high-profile vacant retail space at the corner of Castro and Market streets is District 6 Supervisor Matt Haney. Formerly home to Pottery Barn, it was the site where gay former state legislator and county supervisor Mark Leno headquartered his ultimately unsuccessful mayoral bid in 2018.

The storefront at 2390 Market Street was also where that fall then-House Minority Leader Nancy Pelosi (D-San Francisco) and David Campos, then-chair of the San Francisco Democratic Party, operated the local party's efforts that helped flip control of the House back to the Democrats and returned Pelosi to the speakership. Now, as he runs again for the Assembly seat, Campos is renting the empty storefront at 541 Castro Street.

It also has previously been used for a campaign headquarters. It was where gay former supervisor Jeff Sheehy ran unsuccessfully to keep the District 8 board seat in 2018.

Looking to return out San Francisco leadership to the Assembly, Campos told the Bay Area Reporter that it was important for him to center his campaign in the Castro.

"This seat is extremely important for the LGBTQ community. It is important to have allies but there is nothing like having LGBTQ representation," said Campos, on leave as chief of staff to District Attorney Chesa Boudin.

As for Haney, a straight ally, he told the B.A.R. the Castro is "an important cultural heart of this Assembly district. This district is important to me, as a state legislator I intend to be a champion for the LGBT community and this neighborhood. The Castro has been hit really hard by this pandemic, so this is a way to bring in people who will go to the small businesses and support this neighborhood."

The two other straight candidates also running to succeed Chiu — City College of San Francisco trustee Thea Selby and former Obama administration staffer Bilal Mahmood — are expected to open their campaign headquarters by early 2022. Selby, endorsed last week by Oakland Mayor Libby Schaaf, told the B.A.R. she has yet to decide what part of the district she will lease a space in.

"As a small business person I have quite a few thoughts and ideas about it but haven't made a decision about it. There are a lot of empty storefronts, which is a very sad thing, so where to put your money is actually an important question," said Selby, who is using her office at Fox Plaza as a de facto campaign HQ for the time being.

Even if she ends up outside the Castro, Selby said she intends to focus on LGBTQ voters in the campaign.

"There is no person who runs in San Francisco who can ignore the LGBTQ vote because it is incredibly important," she said.

A spokeswoman for Bilal's campaign told the B.A.R. it would open its HQ early next year and isn't yet ready to announce where it will be located.

Election date set
As expected, Governor Gavin Newsom last Friday set the special primary election for the Assembly seat February 15. If no candidate secures more than 50% of the vote then the top two vote-getters advance to a runoff race April 19.

The primary has been combined on the same ballot as that of the recall of three city school board members — board President Gabriela López, Vice President Faauuga Moliga, and Commissioner Alison Collins — and the municipal race for assessor-recorder. Following her decision to name Carmen Chu city administrator, Breed appointed Joaquin Torres as the new assessor-recorder. He is now seeking to serve out the remainder of Chu's term through early 2023.

With the special election date set, the Alice B. Toklas LGBTQ Democratic Club is holding its endorsement vote for all three races on the ballot Monday, November 22. Its political action committee will meet Friday to make its recommendations ahead of the membership vote.

Tom Ammiano, who became the last gay person to represent the Assembly district when he was termed out in 2014, is once again backing Campos' bid to serve in the Legislature. He had supported him seven years ago when Campos lost to Chiu. 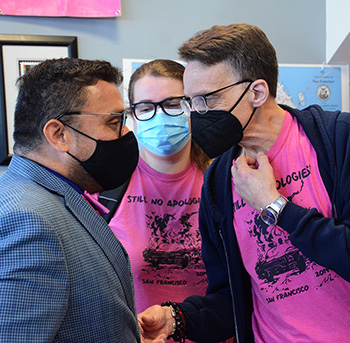 Assembly candidate David Campos, left, spoke with supporters during the kickoff for his campaign November 13 at his headquarters in the Castro

Noting that Campos' HQ is just doors away from where the late gay supervisor Harvey Milk had mounted his historic runs in the 1970s for elected office, including a failed bid for state Assembly, Ammiano told the B.A.R. he hopes Campos can follow in Milk's footsteps to become the city's first Assembly member who is a gay Latino and formerly undocumented immigrant.

"It is criminal that San Francisco has never had Latinx representation in the Legislature," said Ammiano. "I spent six years in Sacramento and I think David has the opportunity and the skills to start a squad and help the party to move to the left."

Also backing Campos in the race is City College board president Shanell Williams, a Black bisexual woman who worked on his first Assembly race as a field organizer. She told the B.A.R. at his HQ opening November 13 that it's no surprise to see the campaigns decide on the Castro as a focal point.

"The LGBTQ vote is critical in this race," said Williams, adding that Campos "deserves the support of this community."

At Haney's HQ opening November 10, gay Castro business owner and longtime nightlife advocate Terrance Alan popped in to hear what the candidate had to say. A co-owner of the currently closed Flore cafe down the street, Alan told the B.A.R. he remains undecided about which of the candidates to support.

"I've watched Matt work some pretty magical accomplishments in the Tenderloin during the pandemic. That in itself is impressive," said Alan, who hopes to open both the cafe and a cannabis retail shop on Noe Street at Market in the coming months. "David and I go back decades. David has been a strong ally on nightlife issues."

Alan said it not only makes sense for the two Assembly candidates to base their campaigns in the Castro, but also is good for the neighborhood as it struggles to come out of the COVID pandemic.

"I am very glad that the home of LGBTQ rights is recognized by both campaigns as the springboard to success. Our community had to fight for health care access, political access, and federal rights," noted Alan. "It's really good to have our community recognized by having the campaigns here."

Matt Dorsey, a gay man who is now a chief spokesman for the city's police department, is personally supporting Haney in the race as he lives in his supervisor district. Formerly a top spokesman in the city attorney's office, Dorsey recalled standing above the entrance to the Castro Muni station many election days helping to rally support for various candidates over the years and for himself when he sought a seat on the local Democratic Party's governing body.

"I think it is testimony to the activism and energy of the Castro in San Francisco politics," Dorsey said of the neighborhood being a central focus in the Assembly race. "For the 30 years I have lived here, it has been the epicenter of political campaigns. It is the first place you go for signatures to get on the ballot and the last place you go to hold signs on election day."

Gay San Francisco Municipal Transportation Agency board member Manny Yekutiel dropped by both Haney and Campos' HQ openings. The owner of Manny's cafe and event space in the Mission district, Yekutiel is remaining neutral in the race and plans to co-host a debate with the candidates January 20.

No matter the outcome of the race, the contest will be a winning one for local Castro businesses patronized by the candidates' volunteers and their campaigns over the coming months, noted Yekutiel, formerly a small business commissioner in the city.

"It shows how central District 8 and the Castro is in this election and in all of our city elections," he said.