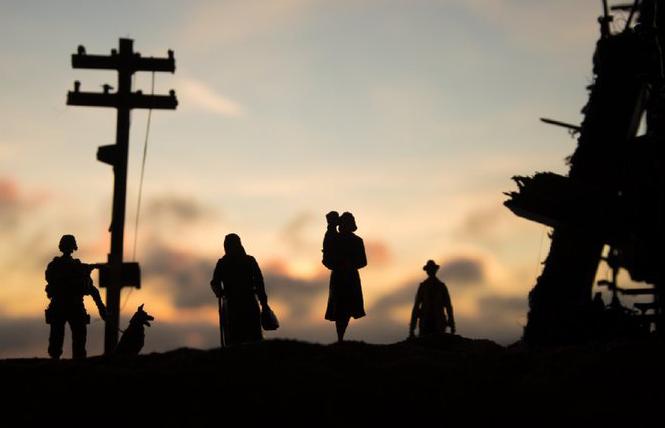 The world watched in shock as the Taliban swiftly took control of Afghanistan in August after 20 years of U.S.-led occupation and war. By late September, more than 120,000 people had been evacuated. But today, tens of thousands of LGBTQ Afghans remain there, in extreme danger and fearing for their lives, according to agencies trying to get them out.

Same-sex activity was already criminalized in Afghanistan. The Taliban, however, has vowed to institute strict Sharia law. A Taliban judge stated in July that gay men would be subject to death by stoning or being crushed by a wall toppled on them.

Countless LGBTQ Afghans have gone into hiding while they desperately hope to be rescued or to find successful ways out of Afghanistan on their own — ways that won't lead to their own deaths or the deaths of loved ones.

Representatives of two nonprofits trying to get queer Afghans to safety — Rainbow Railroad and the Human Rights Campaign — and a gay Afghan American who is helping resettle refugees in the San Francisco Bay Area, spoke with Out in the Bay about the challenges queer people in Afghanistan face and what the U.S. and Canadian governments should be doing to bring people out of a deadly dangerous crisis.

A few key things they shared:
- LGBTQI+ activists are especially endangered and are "actively being pursued by the Taliban," said Dane Bland, director of development and communications at Rainbow Railroad, which has received nearly 800 requests for help fleeing Afghanistan and believes there are many thousands more who need assistance. "It's the equivalent of having an arrest warrant out, except it's essentially an execution warrant."

- "Life for Afghan LGBTQI people has never been easy," said the HRC's Director of Global Partnerships, Jean Freedberg. "There is tremendous social ostracism, homophobia, and transphobia." Since the Taliban takeover, there is "encouragement of families to report their LGBTQI members to the authorities."

- Harris Mojadedi of the Afghan Coalition in Fremont, which is helping Afghan refugees resettle in the Bay Area, told us that before the takeover, "there were [small] freedoms" and people could meet discreetly. Now, "just a suspicion of being gay could lead to a stoning or death." He talks to news media often and "fears every day that I could be compromising my family members," but said spreading awareness of the horrible situation is "the most important thing."

- A coalition of LGBTQI rights organizations, including HRC and Rainbow Railroad, sent a 10-point plan to President Joe Biden September 9, calling on his administration to help LGBTQ Afghans get out of danger. It was backed up by a petition sent to Biden October 22 signed by more than 10,000 Americans.

"Unfortunately, and incredibly disappointingly," Freedberg said in our talk recorded November 4, "there has been very little action on this."

Out in the Bay: 'Gender is queer for everyone,' says Utah prof
Sign up!