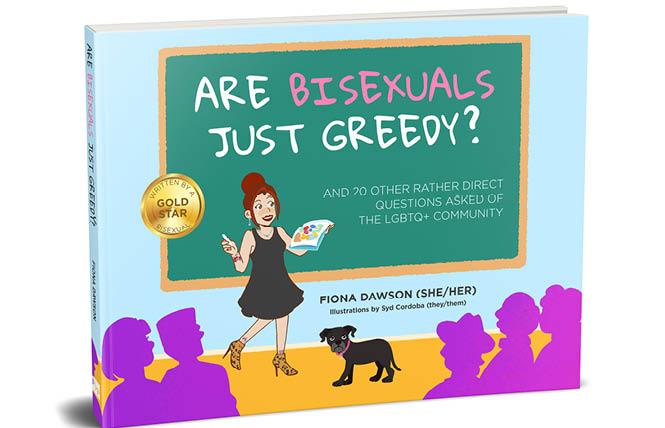 Filmmaker Fiona Dawson has written a book for adults with questions about the LGBTQ community. Photo: Courtesy Pace Public Relations

A bisexual filmmaker is trying her hand at writing with a new illustrated book meant to address misconceptions about the LGBTQ community in a light-hearted but educational way.

Fiona Dawson, best known for the award-winning documentary film "TransMilitary," is the author of "Are Bisexuals Just Greedy? And 20 Other Rather Direct Questions Asked of the LGBTQ+ Community."

The release of the book has pushed back to January 11, due to supply-chain issues, Dawson stated to the Bay Area Reporter November 8, adding that while pre-orders were supposed to start November 9, this was again delayed. People who want to be notified about when they can pre-order the book can sign up for an email here. The book is published by Publish Your Purpose Press, which is a self-described hybrid between traditional and self-publishing.

"It's an extremely personal book," Dawson, 44, told the B.A.R. in a recent phone interview, saying that the title came from a question she remembered her father asking when she was a teenager and the two were watching something on TV.

"My dad said 'I can understand men being gay and women being lesbian, but aren't bisexual people just greedy?'" Dawson recalled. "I didn't know what he meant."

Some other questions include "what's the difference between being 'cisgender' and 'transgender?'" and "why can't I love the sinner and hate the sin?" 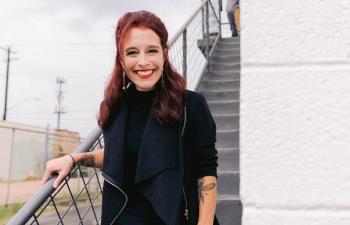 But the book isn't limited to addressing bi erasure.

"As a member of the LGBTQ community, I'm often asked these questions," Dawson said.

In an effort to answer questions coming from ignorance or preconceived prejudices, Dawson decided to write the book.

"I wanted to create a book that looks like a children's book," Dawson said, but "it's written for people old enough to swear and talk about sex."

Dawson added that people might want to bring it to a family gathering and use it as a reference when people, such as the stereotypical uncle, ask questions about the LGBTQ community that might be difficult to answer easily.

Syd Cordoba, a Virginia-based nonbinary artist, provided "beautiful illustrations for the book," Dawson said. Cordoba did not respond to a request for comment by press time. The illustrations include depictions of Dawson's mother and dog, who are both deceased.

"It['s] ... fair to say that having Fiona as a daughter has been an education in itself," the elder Dawson stated to the B.A.R. "I realize that one of Fiona's long-held ambitions has been to write a book and so when she first floated the idea, I naturally felt supportive; when I understood that she was dedicating the book to me I felt extremely flattered and then honored when she asked me to write the afterword."

Peter Dawson stated that he is "very impressed" with the book, and is proud that his daughter is "an enemy of injustice and discrimination and a champion for those who have been marginalized and unrecognized.

"The book is well-written in a concise but amusing style and works well as a series of explainers; I hope and believe that it will reach a wide audience," he stated. "Understandably, perhaps, I do not agree with all of Fiona's views expressed in the book, but this doesn't lessen my pride and admiration for her achievement."

For her part, Fiona Dawson said that after coming out her parents were supportive. "I was never questioned and I was supported even when I was not understood," she said.

Peter Dawson, answering his old question, said that "are bisexuals greedy? Possibly — but no more than the rest of us."