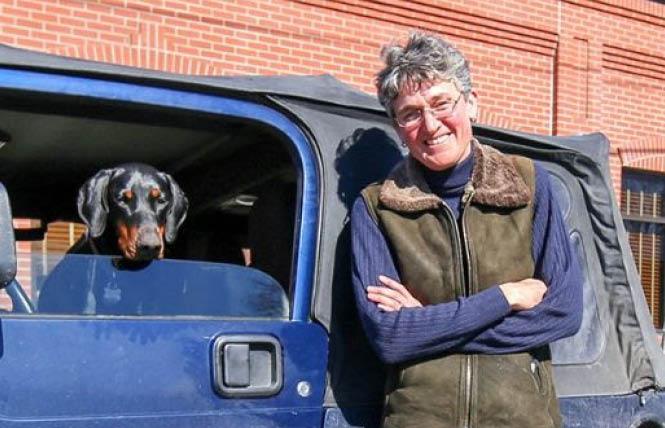 A lesbian former Bay Area councilwoman Sunday officially kicked off her second campaign for an Oregon congressional seat. Jamie McLeod-Skinner is one of at least four out candidates running for Congress in 2022 on the West Coast.

If elected, McLeod-Skinner would be Oregon's first out LGBTQ+ member of Congress. And she would be only the second out woman elected to Congress from the region, which includes the states of California, Oregon, and Washington.

In California, gay Japanese American Congressman Mark Takano (D-Riverside) is expected to seek reelection. He became the first LGBTQ congressional member from the Golden State in 2012 and the first gay person of color ever elected to Congress.

Gay veteran Joseph C. Rocha is seeking to be the first out Latino member of Congress from the Golden State and only the third LGBTQ person elected from California. The Democrat is aiming to oust Republican Congressman Darrell Issa from his suburban 50th Congressional District seat northeast of San Diego. It could become even more Democratic following the redistricting process, giving Rocha an edge when the new maps are finalized in January.

So far the LGBTQ Victory Fund, which helps to elect out candidates across the country, has yet to endorse any West Coast congressional candidates, according to its website where it profiles those it is backing. A spokesman for the organization told the Bay Area Reporter Monday, November 8, the only other out congressional candidate it is aware of in the West Coast is Will Rollins, a gay former federal prosecutor who is one of several Democrats planning to run next year against conservative Congressman Ken Calvert (R-Corona) in California's 42nd Congressional District.

Elliot Imse, the Victory Fund's vice president of communications, told the B.A.R. the organization expects more LGBTQ people to run for Congress along the West Coast next year and that they would announce their candidacies "once redistricting is done."

McLeod-Skinner was the first lesbian elected to the City Council in Santa Clara, California, in 2004 and served on it for eight years. In 2013, McLeod-Skinner enrolled in law school at the University of Oregon, graduating in 2016.

The mother of four had first moved to southern Oregon as a child. Her wife, Cass Skinner, comes from a multi-generational ranching family in eastern Oregon's Jordan Valley.

In 2018, McLeod-Skinner lost her campaign against then-Congressman Greg Walden (R-Hood River) for the Beaver State's expansive 2nd Congressional District seat. He had held it since 1999 and opted not to seek reelection last year. A progressive Democrat, McLeod-Skinner had run unsuccessfully in 2020 to become Oregon's secretary of state.

With the decennial redistricting process creating a brand new 5th Congressional District in Oregon that incorporates parts of the former 2nd District, McLeod-Skinner has jumped into the race for the seat. She may face off against Congressman Kurt Schrader (D-Canby), a moderate Democrat, in the party's primary next year.

He resides in the district but could opt to seek Oregon's newly drawn 6th Congressional District, as there is no requirement that candidates live in the congressional district they seek election to. Schrader recently told Oregon Public Broadcasting that he is trying to determine which seat he will run for and expects to make a decision soon.

According to the public broadcaster, McLeod-Skinner lives in Terrebonne just six miles north of the boundary separating Deschutes and Jefferson counties, the line lawmakers used to separate Oregon's redrawn 5th and 2nd congressional districts. In declaring October 28 her intention to seek the Fifth Congressional District, McLeod-Skinner announced endorsements from local leaders across the district.

"To those in the new CD5, I offer my values and hands-on experience in addressing the challenges of our time - to lead us toward the promise of our future. To those in CD2, I will need your help," stated McLeod-Skinner in an email to supporters.

Schrader is a farmer and had worked as a veterinarian for more than 30 years before entering Congress. During her first congressional race, McLeod-Skinner pitched herself as a "rural Democrat" and garnered local media attention for traveling around the district with her 2-year-old Doberman, Moshi, riding along in her blue Jeep Wrangler. (A photo of her leaning against the vehicle with Moshi in the driver's seat was included in an October 27 email from McLeod-Skinner teasing her 2022 electoral announcement.)

Between January and June of this year McLeod-Skinner had served as interim city manager in Talent, overseeing its recovery from a wildfire that tore through it over Labor Day weekend last year. Milwaukie Mayor Mark Gamba, who ran against Schrader in last year's primary, has endorsed McLeod-Skinner in next year's race.

"Oregonians are facing both challenging and exciting times. Our challenges include the growing climate crisis and corresponding natural disasters, families struggling to get by, and our inability to form a more perfect union. The solutions will not come from those profiting from our pain. That's why I've never taken money from Big Pharma or fossil fuel corporate PACs," noted McLeod-Skinner in a recent email to supporters. "We are seeing the impacts of climate change all around us - from devastating wildfires to ice storms to drought. We need to stop destroying our planet and do a better job of responding to disasters."

She added that her "recent experience leading wildfire recovery efforts in a city that lost 1/3 of its homes and businesses to wildfire brought me face-to-face with those hardest hit by the devastation of climate change. I brought in millions of dollars in aid and helped kick-start housing reconstruction so people could rebuild their lives. It's that kind of relevant expertise that we're missing in Washington, D.C."

After moving to Oregon, she had been hired as the city manager of Phoenix but was fired after a local election brought new leadership to the town's City Council. In July 2019 she was elected to an at-large seat on the Jefferson County Education Service District.

Following her defeat in last year's primary race for secretary of state, McLeod-Skinner co-founded Team Jamie for Oregon and launched a political action committee under that name to help elect progressives and people of color in rural districts of the state.

To learn more about her and her campaign platform, click here.

Updated 11/8/2021 to include Southern California congressional candidate Will Rollins.