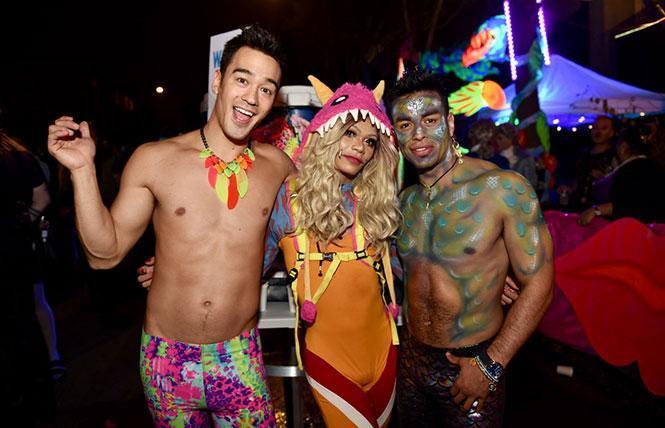 Halloween revelers partied in the Castro in 2018. Photo: Steven Underhill

During a virtual meeting of the Castro Merchants Association November 4, gay District 8 Supervisor Rafael Mandelman said he's "open" to considering a return to the traditional Castro Halloween celebration that was quashed by city leaders after a 2006 mass shooting.

Dave Karraker, a gay man who is a merchants board member and co-owner of MX3 Fitness on Market Street, broached the subject while Mandelman addressed the group.

"Halloween went off without a hitch," Karraker said, referring to last weekend's celebration. "Nobody was stabbed or shot. Isn't it time to think about bringing back that tradition again?"

The tradition Karraker was referring to was a block party format that attracted tens of thousands of people to the Castro until 2006.

Mandelman said that events such as the old Castro Halloween and Pink Saturday — a street party that occurred the night before the June Pride parade — brought LGBTQ people from around the Bay Area together, and helped provide Castro its distinctive flavor. He said he loved to go to these events as a youth.

"I've always felt it'd be great if we could figure out a way of how we can do these great parties," Mandelman said. "There were queer kids around the Bay Area that came and those were wonderful. For neighbors, those were challenging and also scary."

But the success of recent events such as Comfort and Joy's Glow in the Streets fundraising event, which occurred October 30 on Noe Street between Market and Beaver streets, shows there's hope, Mandelman said.

"I am completely open and would love to have a conversation about that with regard to Halloween or Pink Saturday or both," Mandelman said. "But when we do we have to be careful about it."

The reason for caution is so that bringing back the parties doesn't also bring back the "neighborhood problems" that brought about their downfall, such as "the neighborhood being trashed."

Halloween festivities in the Castro, which descended from celebrations among queer people in the Tenderloin, North Beach, and Polk Gulch in the mid-20th century, became one of the premiere events of the year for the neighborhood by the turn of this century.

But with the large crowds descending upon the Castro — including gay bashers — it became hard for the city to ensure public safety at the event. In 2002, four people were stabbed on Halloween night in the Castro; but the death knell for the old-time Halloween festivities was in 2006, when nine people suffered gun-related injuries in a mass shooting while a 10th victim was trampled in the melee that marred the annual street party.

This year's Castro festivities were smaller than in recent years, San Francisco Police Department Captain Rachel Moran, who oversees Mission Station, said during the meeting, but were enjoyable for officers and revelers alike.

Other members of the merchants group did not comment on the Halloween matter during the virtual meeting.