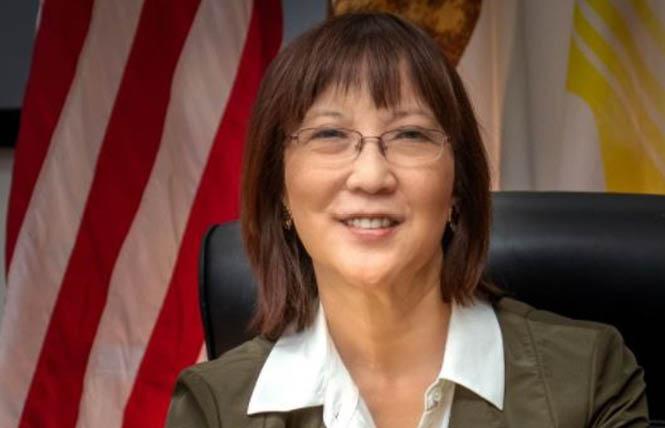 LGBTQ and allied leaders reacted with an outpouring of support and tributes for Alameda County Supervisor Wilma Chan after she was killed by a motorist November 3 while walking her dog in Alameda. Ms. Chan was 72.

According to Ms. Chan's office, she was walking her dog, Maggie, in Alameda when she was struck by a vehicle at around 8 a.m. at Shore Line Drive near Grand Street. She suffered a severe head injury, according to an official statement from her office. Ms. Chan was rushed to Oakland's Highland Hospital where medical staff were unable to revive her. She died at 2:30 p.m., according to the statement.

According to media reports, the crash was not a hit and run. Alameda police said the driver remained at the scene and is cooperating with investigators. The cause of the crash is under investigation.

Ms. Chan, a Democrat and straight ally, was in her second stint on the East Bay government body. She represented District 3, which includes the cities of Alameda, San Leandro, a portion of Oakland, and the unincorporated communities of San Lorenzo, Hayward Acres, and a portion of Ashland. She was the only woman on the five-member board. Ms. Chan previously served on the Board of Supervisors in the 1990s before becoming elected to the California Assembly in 2000, where she served for six years. In 2010 she ran for her old seat on the Board of Supervisors and has been easily reelected since then.

"During her 30-year career in public service, Supervisor Chan had been a staunch advocate for children, families and the elderly, affordable housing, and health care for the uninsured," her office said in the statement.

Ms. Chan was the first Asian American to be elected to the Board of Supervisors. In the Assembly, she was also a trailblazer.

"Wilma Chan made history as the first Asian American to serve in California leadership as majority leader," tweeted gay Assemblyman Evan Low (D-Campbell), who is chair of the Legislative LGBTQ Caucus and the vice chair of API Legislative Caucus.

Governor Gavin Newsom offered his condolences in a tweet.

"We are deeply saddened by the tragic loss of Alameda County Supervisor Wilma Chan," Newsom wrote. "Her decades of service to the community, championing health care, affordable housing, and support for families, has touched the lives of many. Our thoughts are with her loved ones at this time."

Oakland Mayor Libby Schaaf tweeted that she was "devastated" by the news.

Like many residents tonight, I am devastated by the untimely passing of my dear friend and colleague Supervisor Wilma Chan. Wilma was a tireless public servant, a champion for inclusion and equity, and a fierce advocate for public health and our most vulnerable residents. pic.twitter.com/MzhXfOuU1v— Libby Schaaf (@LibbySchaaf) November 4, 2021

Gay Berkeley Rent Board Commissioner Andy Kelley, who is also corresponding secretary of the Alameda County Democratic Party, tweeted that Ms. Chan was "taken from us too soon."

"As we remember all she fought for and accomplished may we redouble our efforts to make our streets safe for pedestrians," he added.

Lesbian BART board Director Rebecca Saltzman also called for safer streets in her message mourning the loss of Ms. Chan.

"Today we lost Alameda County Supervisor Wilma Chan, an incredible leader for children and families," Saltzman tweeted November 3. "It's unacceptable that our streets are too dangerous to take a dog out for a walk. We must make our streets safer for everyone."

According to Ms. Chan's office, she is survived by two children and two grandchildren.

The San Francisco Chronicle reported that Ms. Chan's dog survived the incident and was taken to a kennel.

Alameda County Supervisor Wilma Chan was killed November 3 after she was struck by a motorist while walking her dog in Alameda. Photo: Courtesy Alameda County Board of Supervisors