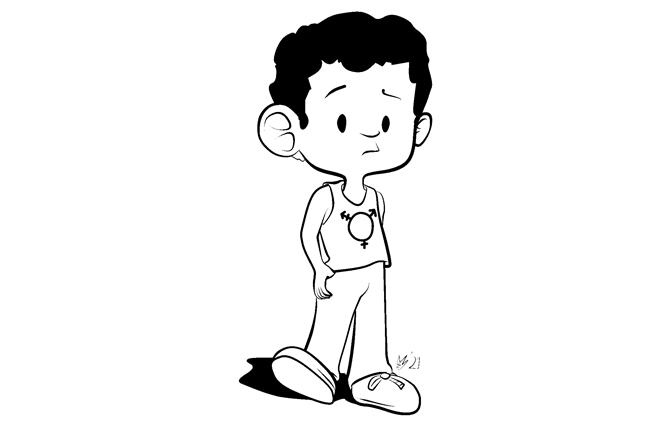 Over the last several years, there has been a belief in some circles that the increase of transgender people over the last decade is some sort of "social contagion" brought on by the evil influence of the internet. It is as if being trans is a trend or in-group identity, versus being a real thing that people experience.

Further, the notion feels a bit like satanic panics from the 1980s, or even the frenzy over supposed teenager codes embedded in snap bracelets or texting acronyms. While, yes, there likely are more people identifying openly about being trans or nonbinary today than ever before, it's not because it's a fad or trend, let alone some sort of online virus. It's because information and support are easier to come by.

I have to tell you a bit about my own youth, by way of illustration. I was a child in the days when the Bee Gees were topping the charts and "Star Wars" was in theaters. There was no ready internet, and while I did discover at an early age that transgender people existed — this was the era that Wendy Carlos and Renee Richards were making headlines as trans women — the ability to act on how I felt was functionally impossible.

What's more, the very first time I heard of a trans person, I was in the same place as my parents, and heard their opinions about the difficulties they would feel over having a trans child. It seemed very clear to me as a kid that perhaps I should keep my feelings buried deep inside.

I knew something wasn't right since I was around age 3, when I could not understand why I could not have the same shoes as other girls. I knew in elementary school that I was always in the wrong line when they would split the boys from the girls. I would pray every night to an indifferent God, begging to wake up the next day as a girl.

Again, this was long before any internet was readily available to create some miraculous corruption.

I fought hard against these feelings for much of my youth and teen years. I recall trying to resolve to stop those feelings entirely on New Year's Eve 1978. Later, after my parents discovered an illicit stash of clothing and such, I repressed ever further.

Yet the feelings remained, no matter what I did to fight them. It wasn't a very happy time in my life, frankly.

It would take until I was in my 20s and in college that I finally was able to locate some resources — first in a local library, then through the back pages of tawdry magazines — for nearby trans-related stores and support groups.

I feel I should include another little aside here, given the last sentence: being trans was never something I have viewed as a sexual compulsion.

There is a largely-debunked theory that all transgender people are in one of two camps: either they are someone who is attracted to others of their birth gender who feel they need to transition to feel right with their preferred partner, or they have a sexual fetish for feminizing themselves.

Of course, if they declare that neither category fits, they are lying.

Yet here I am. I identify as bisexual, though I am largely sexually attracted to other women — and feminizing myself was never a sexual interest of mine. I did cross dress when I was younger, but not with any sexual endgame in mind — and, no, I am not lying.

It's not a fetish. I simply am a woman.

We came pre-sexualized, created to be ashamed, and presented as little more than a fetish for the patrons of such establishments.

So, in my time, it was a challenge to find information, resources, and community to help support my eventual transition. Those roadblocks made a lot of other transgender people continue to repress or, at worse, take their lives due to the stress and pain they were experiencing.

Today, this information is readily available. As of this writing, a Google search of the word "Transgender" returns 5,560,000,000 results. I'm happy to note that the items on the first page are largely positive, from reliable sources. You'll even find a video of the White House's recent convening on transgender equality.

More than this, mass media is showing transgender people on a regular basis. Yes, it could do more, and there's still a lot of issues with how things are presented, but it's a lot better than it was when I was growing up and transgender stories were largely relegated to songs like "Lola" by the Kinks or "very special episodes" of "The Jeffersons" or "All in the Family."

This is the cause of this "contagion." It's not that being transgender is the latest trend, like cottagecore (a fashion aesthetic promulgated by teenagers and young adults celebrating an idealized rural life) or such. It is merely the outgrowth of a greater level of both acceptance and resources. We're only now starting to see just how large and diverse the trans community is and can be.

It's not a fad, it's a community of people finally being able to find their place in this world. Support them.

Gwen Smith still doesn't like that Kinks song. You'll find her at www.gwensmith.com