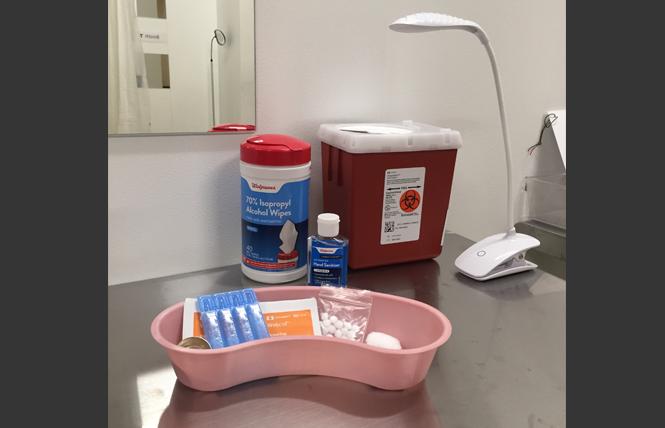 Supplies that would be used at a safe consumption site, as shown in a 2018 demonstration project that San Francisco officials set up to show what such a facility might look like. Photo: Liz Highleyman

It seems like some legislators in Sacramento do not realize or do not want to acknowledge the severity of the drug overdose crisis in cities like San Francisco, Oakland, and Los Angeles. These were the jurisdictions included in gay state Senator Scott Wiener's (D-San Francisco) pilot safe consumption site legislation, Senate Bill 57, which earlier this month was punted to 2022. Wiener has been trying to get this bill passed for years, and even with a supermajority of Democratic lawmakers in Sacramento, he can't get it done. Meanwhile, overdose deaths in the city continue to flummox officials, demonstrating the urgency for this type of program. The San Francisco Chronicle reported in May that there were more than 700 drug overdose deaths in the city in 2020, eclipsing 257 deaths here from COVID-19. During the first four months of this year, there were 252 accidental overdose deaths. The Chronicle reported this week that there has been a slight dip in the number of overdose deaths since its article from a couple of months ago, but the number is still stubbornly high — 344 in the first six months of 2021. As we report this week, gay District 8 Supervisor Rafael Mandelman was alarmed in June when he learned there were three overdose deaths in the LGBTQ Castro neighborhood on the same day. These people all died indoors, he noted in a Facebook post, meaning they were probably not among the unhoused residents of the neighborhood.

Safe consumption sites, also known as supervised injection facilities, allow people to use drugs under the watch of trained staff, reducing the risk of overdose deaths. They provide sterile needles to prevent transmission of HIV and hepatitis B and C, and offer clients an entry point for seeking medical care and addiction treatment. Indoor sites also reduce street-based drug use and improper syringe disposal, a chronic problem in the city. While there are currently no sanctioned injection sites in the United States, around 150 such facilities operate worldwide. Efforts to open such a site in Philadelphia were dashed by a federal judge earlier this year, when he determined it would violate federal law.

That appears to be what's happening with Wiener's bill, too. The Chronicle, in an editorial in support of SB 57, noted that Assemblyman Jim Wood (D-Santa Rosa), chair of the Assembly Health Committee, wanted to give U.S. Attorney General Merrick Garland time to develop a position on the legality of such facilities. While federal authority is crucial to the long-term success of safe consumption sites, we believe that Wiener's pilot program deserved a vote this year. During debate over previous iterations of Wiener's bill, then-President Donald Trump's administration strongly opposed safe consumption sites and indicated that cities operating such programs could expect federal repercussions. We believe the new administration is more open to jurisdictions trying innovative programs to help people who use drugs, and at any rate, Garland likely would not threaten state or local government officials the way his predecessors in the Justice Department did. San Francisco Mayor London Breed said as much when Wiener introduced SB 57 last year, noting that then President-elect Joe Biden had stated he would govern by science in public health matters. And make no mistake, drug use is a public health emergency and should be treated as such. Both methamphetamine and fentanyl, which is much stronger than heroin, are part of the city's current overdose rate.

Wiener said that he was disappointed in Wood's action, but emphasized that SB 57 is not dead. "The Assembly Health Committee has informed me that it will not be hearing Senate Bill 57 ... this year and will instead hear it and act on the bill this coming January," Wiener stated in a news release. "Because we are in the first year of a two-year legislative session, the bill can be heard during either year. In other words, SB 57 is very much alive, albeit delayed. The chair of the committee has assured me that the bill will be heard in January."

Wiener pointed out that his bill has passed the Assembly and Senate twice in its different forms over the past five years, and he's optimistic that SB 57 will eventually be approved. Governor Gavin Newsom has expressed support for the concept of safe consumption sites. Unfortunately, the delay in hearing SB 57 sidesteps the real immediate need for this type of pilot project, which, of course, would take some time to set up. All of this is to say that Wood was wrong to delay SB 57 and his committee's inaction this year only exacerbates the drug crisis. Safe consumption sites have been shown to work in other countries and it's time California take the lead in the U.S. — starting with a pilot program. We urge the Legislature to swiftly take up Wiener's bill in January and pass it as soon as possible.

Editorial: Newsom needs to turn up the volume
Sign up!