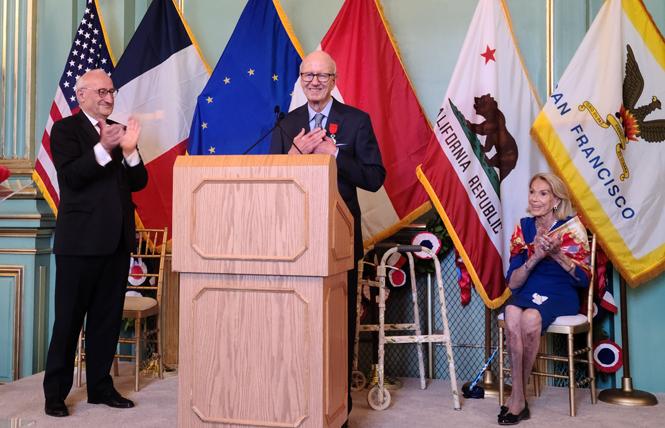 Foreign diplomats, state, and local officials were on hand July 19 as former Bay Area Reporter publisher Thomas E. Horn formally received France's National Order of the Legion of Honor during a ceremony in the Green Room at the San Francisco War Memorial Building.

Horn, a gay man, was notified in January by French President Emmanuel Macron that he would be receiving the honor, which is the highest award given by the French Republic for outstanding service to France. It is conferred upon men and women, either French citizens or foreigners, for outstanding achievements in military or civil life.

Dubbed San Francisco's own "French connection" by protocol chief Charlotte Mailliard Shultz, Horn beamed as Philippe Étienne, the French ambassador to the United States, pinned the award on him after praising Horn's work to strengthen San Francisco's relationship with France and its culture.

Étienne noted that in 2019, when a fire gutted Notre Dame Cathedral in Paris and destroyed its historic spire, Horn was among the first to organize a San Francisco fundraiser to help with the rebuilding process.

"Thanks to international fundraising, renovation of the roof is progressing," the ambassador said.

"I cannot tell you how much this recognition means to me," Horn said. "My love of France and French culture dates back to my childhood."

He explained that he first visited the country when he was 16 and later learned the language. He gave his remarks in English and French. 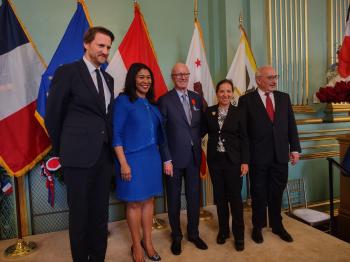 San Francisco Mayor London Breed welcomed the dignitaries, who, in addition to Étienne included Frederic Jung, the new consul general of France to San Francisco, Maguy Maccario Doyle, ambassador of Monaco to the U.S. and Canada, and California Lieutenant Governor Eleni Kounalakis. Horn is the honorary consul general for Monaco in San Francisco, to which Prince Albert II of Monaco appointed him in 2009.

"We're celebrating someone we're so proud of and honored to know," Breed said. "His history and work over the decades is extraordinary. Tom and his work in advocating for civil rights in the past and support for the LGBTQ community."

Horn, an attorney, started his career with the American Civil Liberties Union.

The mayor mentioned Horn's time at the helm of the B.A.R. and touted his investments in art and culture. As a member of the War Memorial Board and currently its president, Horn had a key role in the restoration several years ago of the War Memorial Building, including the vaunted Green Room.

"You led the effort to keep these buildings together," the mayor said, referring to the War Memorial and Opera House. "Something you definitely deserve is the Legion of Honor."

Kounalakis, herself a former ambassador to Hungary during the Obama administration, pointed out that there are nearly 2,000 French-owned firms in California and that economic ties between the two countries are important.

"I can testify that nothing is [more important] than strong people-to-people ties," she said.

Étienne began his remarks noting that Horn has worked to promote French culture for more than 30 years.

This is Horn's fourth decoration from the French. He previously received Arts & Letters and twice the National Order of Merit (Chevalier and then Commander).