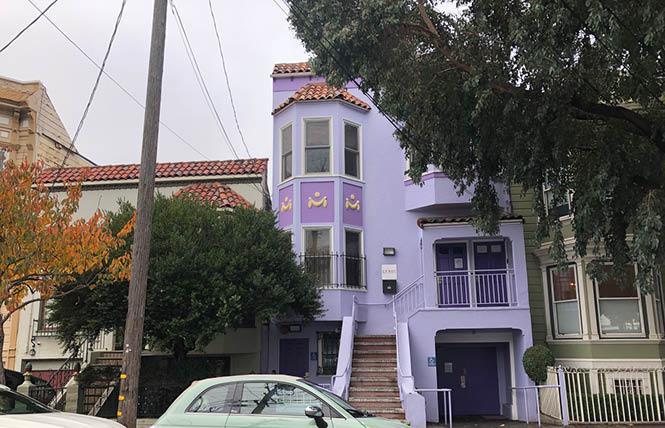 The Lavender Youth Recreation and Information Center, or LYRIC, received $500,000 from Twitter co-founder Jack Dorsey toward the renovation of its building in the Castro LGBTQ district. Photo: Matthew S. Bajko

Twitter co-founder and CEO Jack Dorsey has donated $500,000 to the Lavender Youth Recreation and Information Center through his #StartSmall Awards.

According to a recent news release from LYRIC, the grant will be used for its Flourish with LYRIC campaign. With the funds from Dorsey, the campaign has now raised over $2.1 million toward its $2.5 million goal to expand and renovate its youth center in San Francisco's LGBTQ Castro district.

"LYRIC is so grateful to Jack Dorsey and #StartSmall for the transformative donation to help expand facilities due to a big leap in demand and LYRIC's growth in recent years, and to ensure the safety of LGBTQQ+ youth, especially to ensure their safety in the wake of COVID-19," Toni Newman, LYRIC's executive director, stated in a news release.

LYRIC's board noted that with this latest donation, it is now on the threshold of the public phase of the campaign to raise the remaining $400,000; it should launch in January. Other campaign contributors include the William and Flora Hewlett Foundation ($500,000), Crankstart ($500,000), and the city of San Francisco ($361,000).

The expansion project initially was to be completed this summer. Last October, the city's planning commission signed off on the agency's renovation plan, which will enclose a portion of the building's driveway on Collingwood Street by pushing out the ground floor facade to bring it flush with the rest of the building. In front would be a courtyard area and a new ADA-accessible main entrance.

Interior remodels of the main building's first floor and a rear building will allow the agency to provide expanded space for its youth programs, a new kitchen area, and additional spaces where staff can meet privately with clients. A rear yard patio between the two structures will also be reconfigured to provide better access and use of the space.

According to the new timeline on the project's website, construction should begin in October and wrap by next June during Pride Month.

Provide feedback on city streets strategy
The San Francisco Planning Department and other agencies have announced that there are opportunities for the public to provide feedback on the Streets and Freeways Strategy.

ConnectSF, the city's multi-agency collaborative process, invites people to learn about the streets strategy and provide feedback on it. According to an email, the strategy identifies how streets and freeways can best support San Francisco's Transit First, Vision Zero, climate action, and equity goals.

The strategy has five components: maintain and reinvest the current transportation system; prioritize transit and carpooling on streets and freeways; build a complete network for walking and biking; prioritize safety in all investments and through targeted programs; and repair harms and reconnect communities.

People can learn about the strategies and provide feedback by July 31. To do so, click here.

Comprising a range of public health strategies, harm reduction is designed to lessen the negative social and/or physical consequences associated with various human behaviors, both legal and illegal. GLIDE'S harm reduction programs center on the dignity and humanity of people who use drugs, who we love unconditionally, and aim to serve with respect and compassion. The panel will feature the voices of those who have overcome challenges, illuminate what harm reduction is and is not, and identify policies that help or continue to harm.

The meeting will be hosted by Juliana DePietro, director of harm reduction services at GLIDE. She will be joined by panelists Wes Saver, policy manager at the Center for Social Justice; Del Seymour, a longtime Tenderloin community member who founded the Tenderloin Walking Tours and Code Tenderloin and who was chronically homeless and a former drug user and seller; and John Negrete, a lifelong Californian who has lived both rural and urban lives and who has had a long and complex relationship with drugs and homelessness but currently is housed and working as a program manager for GLIDE's harm reduction services.