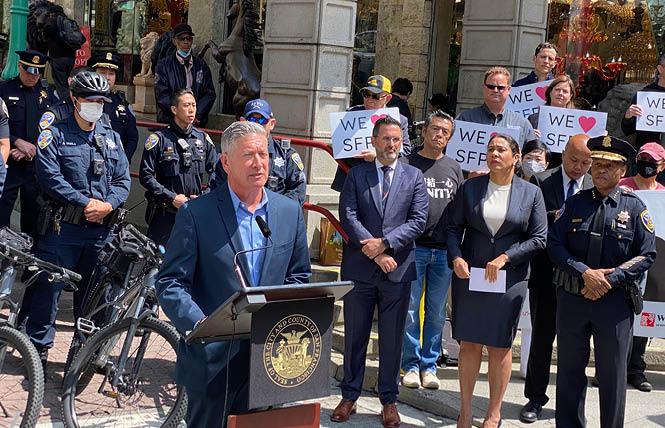 The San Francisco Police Department is deploying 26 additional officers on foot and bicycle patrol to the city's most visited destinations — including two to the LGBTQ Castro district — during the summer tourist season.

They are expected to patrol along both Castro and upper Market streets in the neighborhood. The deployments are part of the city's efforts to welcome back the millions of tourists who flock to San Francisco each year, officials said at a July 19 news conference in front of Chinatown's Dragon's Gate.

Mayor London Breed, standing in front of a phalanx of police officers, said that she had the opportunity to visit many San Francisco neighborhoods last weekend.

"I met so many people not from San Francisco who are so happy to be in the neighborhoods, so happy to walk into our businesses," Breed said. "We have work to do to make sure that when people come to San Francisco that they feel safe, that they're not concerned about their car being broken into, about being robbed, or witnessing crimes as well.

"Sadly we've seen a number of terrible, terrible events that have occurred that are hard to watch on video," Breed said, seeming to concede that while some reported violent crimes are down, an emerging narrative casts the city as being increasingly lawless — and not entirely without evidence, since reported cases of burglary, auto theft, and gun violence are higher than in recent years. Reported cases of rape and robbery have declined, crime data shows.

Breed pointed at the uniformed officers behind her.

"In almost every instance of a violent attack, this police department — the guys and women behind me — they have made an arrest," Breed said. "You will not get away with these horrible attacks in our city."

Police Chief William Scott addressed the specifics of the Tourism Deployment Plan. The 26 officers will be deployed in five of the city's 10 police districts.

The Central District, the most visited part of the city, will see 14 of these 26 officers deployed. It includes the Union Square, Chinatown, Fisherman's Wharf, and North Beach neighborhoods.

"On the way to this press conference, on the police radio, I heard two officers interrupted a car break-in in progress at Golden Gate Park," Scott said. "We're not going to tolerate this nonsense.

"A word to the people breaking into cars at the Palace of Fine Arts — you will be caught," he added.

Scott said the success of the Tourism Deployment Plan is also up to the neighborhoods.

"It's not just police; it's community leaders, civic leaders, elected officials," Scott said. "We all have to come together to make our city better."

The city is expecting 15.3 million tourists by the end of the year, according to a news release from Breed's office.

Joe D'Alessandro, a gay man who is the CEO of San Francisco Travel, said that tourists pump $10 billion into the city's economy each year and some 86,000 people are employed in the sector.

"Due to the impact of COVID-19 we saw a decline in 60% of visitations," D'Alessandro said. "The recovery will be long, slow, and painful, but it's absolutely essential people who visit San Francisco feel safe when they come here and have a great experience.

"The No. 1 thing a visitor visiting a destination wants is to feel safe," D'Alessandro added.

D'Alessandro told the Bay Area Reporter that SF Travel has "a number of different programs and initiatives" to attract LGBTQ visitors.

"We don't just market to the LGBTQ market as a niche, but include it into everything we do — convention marketing, tourism — we are always telling the story of San Francisco and our history," D'Alessandro said.

SF Travel has a year-round partnership with GayCities and Q.Digital, he added. It also has a dedicated LGBTQ page on its website.

When asked how SF Travel hopes to attract people to the Castro specifically, D'Alessandro framed it in terms of the organization's efforts to get visitors outside of downtown.

"We have a very focused campaign to get people out in the neighborhoods," D'Alessandro said. "It makes people stay longer in San Francisco. Our philosophy is that the economic impact is then more significant in our community. So, we tell lots of stories about our neighborhoods."

Overall visitor spending is unlikely to return to pre-COVID-19 levels for the next four years, SF Travel estimates.