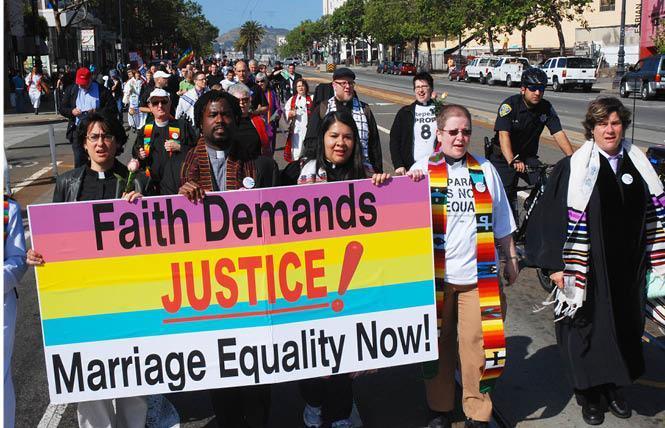 Proponents of Proposition 8 have to file a brief on or before August 16 to show they have standing to appeal a district court decision to release tapes of the landmark Perry v. Schwarzenegger trial that led to the resumption of same-sex marriages in California.

As the Bay Area Reporter previously reported Judge William H. Orrick of the U.S. District Court for the Northern District of California had ordered last year that tapes of the 10-year-old trial be released. The 9th U.S. Circuit Court of Appeal put a stay on the release of the tapes pending appeal.

Before the appeal can be heard, the backers of the anti-LGBTQ ballot measure have to show standing.

Thomas Burke, an attorney for KQED-TV, which is seeking the release of the tapes, expressed confidence to the B.A.R. in the past that the 9th Circuit will uphold the district court ruling.

"Presumably if the court determines that the proponents of Prop 8 lack the legal standing to pursue this appeal, the 9th Circuit will dismiss their appeal and the video recordings of the Prop 8 trial will become public," Burke stated in an email to the B.A.R. "The court's order provides no guidance on how soon it will rule on the propriety of the proponents' standing to pursue the appeal, but if I had to guess, once the parties submit their briefs, the court will likely issue its order (regarding the appeal, including the standing issue) within a few months."

The saga over the release of the tapes has been going on for almost a decade.

The tapes of the 2010 trial — which concluded with then-U.S. District Court Judge Vaughn Walker, a Bush appointee to the bench, ruling that Prop 8's ban on same-sex marriages in California was unconstitutional — were supposed to be released on August 12, 2020, as a rule in the Northern District of California prevents the release of some documentary materials for up to 10 years from the closure of the case. (Walker came out as gay after the trial.)

However, on April 1, 2020, attorneys for four Prop 8 proponents filed a motion in the district court to keep the tapes of the trial from the public even after the expiration of the 10-year seal.

Andrew P. Pugno, a Sacramento-area attorney who represents proponents, did not respond to a request for comment by press time.