Out in the Bay: 'OUT of Site' revives Haight-Ashbury's queer history 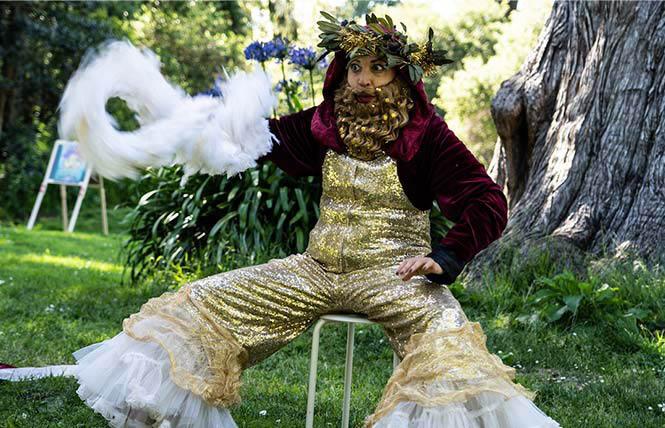 [Editor's note: During the summer, Out in the Bay is airing a mix of previously recorded shows and new content. This week is a new show.]

San Francisco's Haight-Ashbury was iconic in the late 1960s and early 1970s as the center of the anti-Vietnam War and sexual revolution counterculture. Often overlooked is its part in LGBTQ liberation, a role that gets some loving attention in the "OUT of Site: Haight-Ashbury" performance-driven walking tour running weekends through July 25.

The Haight-Ashbury tour is the third in a multi-year "OUT of Site" series and is featured on this week's Out in the Bay — Queer Radio from San Francisco, hosted by producer Lusen Mendel.

The Haight-Ashbury was "at one point in the 1960s and 1970s an oasis for the gay community, for LGBTQ+ folks," said Seth Eisen, founder of Eye Zen Presents, which produces "OUT of Site." Yet "in the moment that this neighborhood was known and thought of as the place of the sexual revolution, it was still illegal to be gay," noted Eisen at the tour's start. "We were much more in the closet."

Channeling Caserta at her storefront, D'Elia tells Caserta's back-story: "Growing up in the Bayou, I had great parents, friends, plenty to do. But something in me knew there was more." She came west, eventually opening her Haight Street store Mnasidika. "Looking out the doorway of my shop, I feel like Alice, watching Wonderland materialize in front of me."

In script by Michelle Carter, Caserta tells us rock impresario Bill Graham got her to sell concert tickets at Mnasidika — "that was the start of the rock ballroom scene, baby!" — that she convinced Levi Strauss to produce bell-bottom jeans for her shop, and re-enacts how she and Joplin took heroin together. (Joplin died of an accidental overdose in 1970 at age 27.)

In Golden Gate Park, D'Elia resurrects Hibiscus enticing the group to dance to 1960s music: "Spin with me! You can spin your feet, your hands, your fingers. Your head side to side," Hibiscus exhorts. "YES! Loosen up, get those heads rolling. Spin! Arms up if you want. Yes, spin darling!"

Eisen said Hibiscus and Caserta were in some ways polar opposites; she was a driven entrepreneur, Hibiscus "a real everything-should-be-free type person." But both advanced queer rights, even though being seen as gay — the common term then — was not as important to them as being seen "as a freak, seen as an outsider, seen as a counter-culture figure ... doing something different than the status quo. Stepping outside in what we would call 'queerness' to break down barriers."

Hear more from Eisen, D'Elia, and sounds and scenes from "OUT of Site: Haight-Ashbury" on this week's Out in the Bay, produced and hosted by Lusen Mendel. The program airs at 9:30 a.m. Saturday, July 17, on KSFP, 102.5 FM in SF only, and is available anytime, anywhere on Out in the Bay's website. Out in the Bay also airs on KALW, 91.7 FM throughout the Bay Area, at 5 p.m. Fridays. (New time, starting July 23.)

Eric Jansen is founding producer and primary host of Out in the Bay - Queer Radio from San Francisco. Hear current and past shows here.

Out in the Bay: SF Pride grand marshals encourage 'tough conversations'
Sign up!