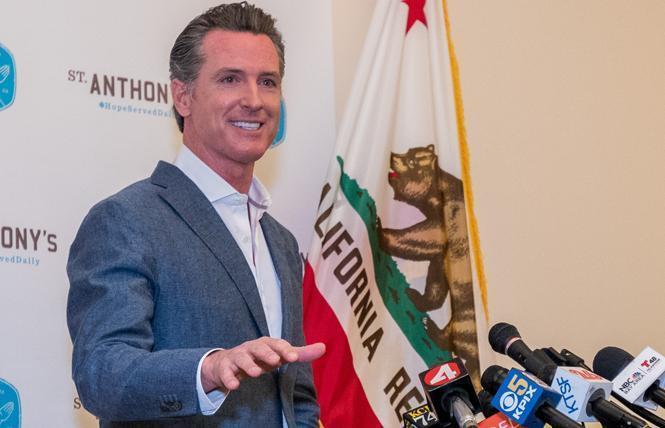 Deceased Californians who are nonbinary will be able to be identified as such on their death certificates under legislation Governor Gavin Newsom signed July 9. It is the first LGBTQ-related bill that the governor approved this legislative session, with 10 more currently making their way through the Legislature.

Assemblywoman Rebecca Bauer-Kahan (D-Orinda) authored the death certificate bill, Assembly Bill 439. It was one of a slew of bills that Newsom signed into law late Friday without comment.

Another bill he signed that Bauer-Kahan authored, AB 378, will update state codes to refer to statewide elected officials by gender-neutral pronouns. Currently, the codes use only male pronouns.

"I am beyond thrilled that Governor Gavin Newsom has signed these two bills into law, and has helped correct these egregious injustices within our code. It's 2021 and our laws need to reflect that anyone, regardless of gender, can hold California's highest offices," Bauer-Kahan told the Bay Area Reporter.

"For too long, nonbinary individuals have been inaccurately identified, an unjust labeling that violates their right to equal treatment" noted Bauer-Kahan. "AB 439 ensures that nonbinary people will be respected and remembered accurately for who they were."

Melissa Shuen-Mallory, a nonbinary queer femme who is on the East Bay's New Haven Unified School Board, hailed the signing of the bill. She told the B.A.R. that such legislation not only benefits nonbinary individuals but also intersex people who do not identify as male or female.

"I think it is great. This is just one step closer to having all of your official documents affirm your gender identity," said Shuen-Mallory, who is planning to update their driver's license so it states they are nonbinary when it is time to renew it.

Newsom's signing AB 439 follows the news last month that the State Department has begun the process to allow people who identify as nonbinary, intersex, or gender-nonconforming to choose a gender-neutral gender marker for their U.S. Passports and Consular Reports of Birth Abroad. According to a recent study by the Williams Institute at UCLA School of Law, roughly 11% of LGBTQ adults in the U.S. — approximately 1.2 million people — identify as nonbinary and the majority of them are white, urban residents under the age of 29.

As Equality California Legislative Director Tami A. Martin stated when Bauer-Kahan's legislation passed out of the Legislature last month, "This bill is another crucial part of affirming the dignity of our trans and nonbinary community. We are grateful to Assemblywoman Rebecca Bauer-Kahan for her leadership in advancing this issue and to Senate Pro Tem Toni Atkins for laying the foundation of this work beginning in 2014."

Gender-neutral offices
Bauer-Kahan's AB 378 systematically goes through laws related to the offices of the governor, lieutenant governor, attorney general, secretary of state, state controller, treasurer, insurance commissioner, and board of equalization to make all references to the gender of the officer gender neutral. Currently, most parts of the state code refer to these constitutional office holders as only "he" or "him."

It is similar to SB 272 authored by gay state Senator John Laird (D- Santa Cruz), of which Bauer-Kahan is a co-author and is still pending in the Legislature. The bill will update "archaic gender-specific pronouns" used in the state's vehicle code to refer to the California Highway Patrol commissioner, now led by a woman, as well as throughout the state's insurance code.

It is one of the 10 LGBTQ bills lawmakers and community groups hope will also be sent to Newsom for his signage in the coming weeks. One of the bills would protect the privacy rights of people receiving sensitive health care services, such as gender-affirming care. AB 1184 is one of two trans rights bills Assemblyman David Chiu (D-San Francisco) is carrying this year.

Senator Lena A. Gonzalez's (D-Long Beach) SB 283, aimed at strengthening the Equal Insurance HIV Act of 2020, would impose a prohibition as of January 1, 2023 on a life or disability insurance insurer from considering an applicant's occupation in determining whether to require an HIV test and clarifies that limiting benefits payable for a loss caused or contributed to by HIV is allowed if it was part of the original underwriting risk. It also clarifies that the misdemeanor for willful, negligent, or malicious disclosure of HIV test results to a third party is punishable by imprisonment for a period not to exceed 364 days.

And Laird's SB 258 aims to include older people with HIV as part of the population of "greatest social need" when it comes to programs and services administered by the California Department of Aging.

Newsom makes his case against the recall to LGBTQs
Sign up!