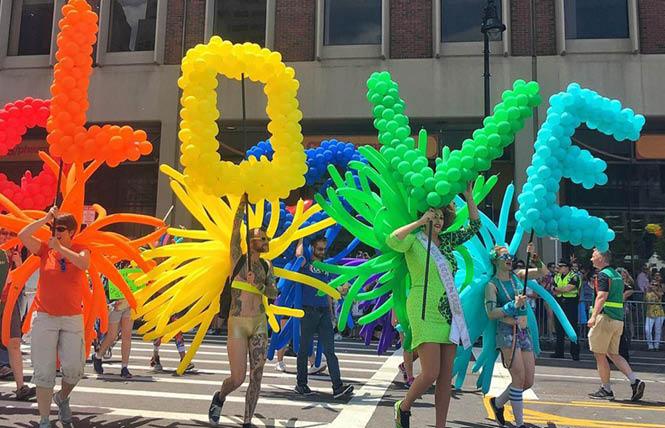 The Boston Pride organization, which put on the 2019 parade, announced July 9 that it was dissolving. Photo: Courtesy Bostoncalendar.com

Amid a boycott over racial equity issues, the Boston Pride organization announced in a statement July 9 that it is dissolving.

"It is clear to us that our community needs and wants change without the involvement of Boston Pride," the statement on its website reads. "We have heard the concerns of the QTBIPOC community and others. We care too much to stand in the way. Therefore, Boston Pride is dissolving. There will be no further events or programming planned, and the board is taking steps to close down the organization."

Boston Pride, which held virtual events in June to celebrate LGBTQ Pride Month, has been criticized for being "whitewashed" and trans-exclusionary, according to a recent article in the Boston Globe.

Over 25 organizations, including the Boston Area Rape Crisis Center, GLAD, Mass NOW, the Planned Parenthood Advocacy Fund of Massachusetts, and the Center for Black Equity, joined a boycott of Boston Pride last year, citing that the board of directors had no Black members, according to the Globe.

In early June 2020, the Pride board's social media removed a "#blacklivesmatter" statement and replaced it with another statement condemning police violence, without consulting Boston Black Pride, according to Pride For the People. Boston Pride subsequently apologized for the poorly received statement.

The Globe reported last month that Pride board President Linda DeMarco planned to resign over the summer.

On Friday, the board noted that it has attempted to respond to community concerns.

"Over the past year, we have invested time and energy to address the concerns of the community, both with our Diversity, Equity, Inclusion and Access work with Dorrington & Saunders and by forming the Transformation Advisory Committee comprised of members of the LGBTQIA+ community to help bring change to our organization," the statement reads. "We are grateful for all who have been involved in this process."

The statement, drafted by the board of directors, includes hopes that others will take up the task of leading Pride events in the City of Champions.

"We know many people care about Pride in Boston, and we encourage them to continue the work," the statement reads. "By making the decision to close down, we hope new leaders will emerge from the community to lead the Pride movement in Boston.

"This decision was made with a heavy heart, out of love, and hope for a better future," the statement concludes.

An email sent to Boston Pride seeking comment from DeMarco was not immediately returned.

Before the COVID-19 pandemic, the Boston Pride parade was the largest single-day annual parade in New England, according to the Globe.

In May, the Rainbow Times reported on problems at Boston Pride. The news that GLAD, an LGBTQ public interest legal organization, had joined the boycott noted that agency leaders felt that queer people of color and trans people deserved leadership roles in the Boston Pride organization.

Police presence in Pride parades has been an issue in recent years, particularly since the police killing of George Floyd in Minneapolis last May, in which a former officer was convicted of murder earlier this year. As the B.A.R. previously reported, uniformed police officers have been banned from several Pride parades around the country due to concerns over present and past police brutality, including in San Francisco and in New York City.