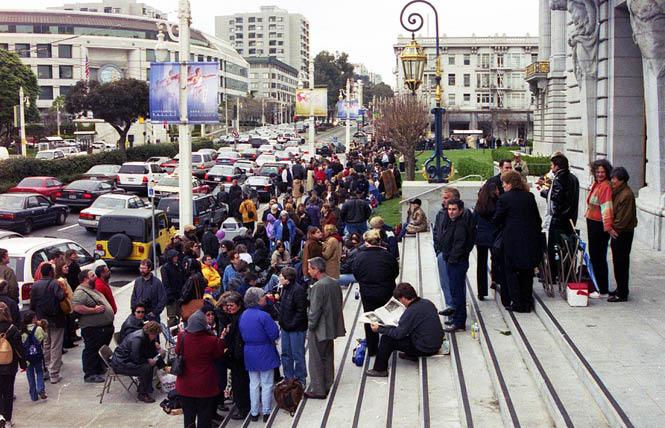 A San Francisco Superior Court judge found that one of the parties to a 2004 marriage between two lesbians that had been declared null and void by the state nonetheless qualifies as a "putative" spouse.

The tentative decision in Hernandez v. King, made June 25 by Judge Victor M. Hwang, holds that because Cynthia Hernandez "had a good faith subjective belief that her marriage was valid" from 2004 to 2020, she qualifies as a putative spouse.

To be a putative spouse under state law, one part of a couple must have had a good faith belief the marriage was valid. It does not necessarily have to be a reasonable belief, Hwang's decision states. According to Valerie F. Horn, an attorney for respondent June King, this doctrine is normally used in situations relating to common law marriages (that is, those not solemnized) in which one of the partners has died.

"A man is with a woman, and one of them makes a claim for death benefits for the deceased partner," Horn said, explaining the majority of putative spouse cases. "They lived together, shared property, had children. A person says, 'I'm the spouse.'"

The court battle came about after Hernandez filed for a dissolution of marriage in early 2020, which Horn said was with hopes of getting community property and spousal support. The two lived together until 2019.

In its 2004 decision in the case of Lockyer v. San Francisco, the California Supreme Court ruled that the city lacked the authority to issue the marriage licenses to people of the same sex and ordered the city to notify all those who'd been given marriage licenses that their marriages "were void from their inception and legally null."

Hernandez, a lawyer herself, and King began dating in 2000, Hwang's decision states. Four years later, then-San Francisco Mayor Gavin Newsom famously directed city officials to begin issuing marriage licenses to same-sex couples, finding the state law requiring marriages be between one man and one woman to be discriminatory and unconstitutional.

"On February 16, 2004, the parties were married in a formal ceremony at San Francisco City Hall and received an official marriage certificate confirming that they were married. Petitioner testified that then-county Supervisor Bevan Dufty pulled the parties out of their place in line and took them to a ceremonial courtroom to perform a 'special wedding,'" the decision states.

"Supervisor Dufty warned the parties that the 'law would go back and forth but eventually would end up in favor of gay marriage' and that there would be a 'period of backlash,'" the decision continued. "Following the ceremony, the parties then went to a church on the recommendation of Supervisor Dufty in order to bolster the legitimacy of the marriage."

Dufty did not respond to an immediate request for comment.

Same-sex marriage became legal in California briefly in 2008, and again permanently in 2013, after the U.S. Supreme Court decided that proponents of Proposition 8, the state's same-sex marriage ban, did not have standing after a federal judge ruled Prop 8 unconstitutional. Same-sex marriage became legal nationwide in 2015, with the U.S. Supreme Court's decision in Obergefell v. Hodges. These subsequent events did not have a retroactive effect on the marriages declared null by the Lockyer decision, which Hwang's decision affirmed.

Hwang found that both the City Hall and religious ceremonies that Hernandez and King had constituted "a conscious and intentional effort to create a valid marriage." He also stated in his ruling that, "The court believes that petitioner [Hernandez] lied in testifying that she did not receive the Lockyer notice, was deliberately evasive, and disingenuous on the stand."

Nevertheless, Hwang ruled that "there is nothing in the evidence to prove that the parties knew that they would [have] had to re-marry after Obergefell in order for them to stay married."

"While this may have been spelled out in the Lockyer notice, this court can only speculate since no evidence was presented on this point," the ruling states. "As petitioner repeatedly testified, it was her belief that marriage between two gay persons was always legal, but simply barred due to a discriminatory interpretation of the Constitution by certain individuals.

"As such, the court does not find it objectively or subjectively unreasonable for someone, even an attorney, to believe that the Obergefell decision, in finding that same-sex couples have a fundamental right to marry, would overturn the Lockyer decision and reinstate the marriages that had been voided," the ruling continues. "The specific question is not one of family law, but whether petitioner understood the reasoning of the Lockyer case (in finding that a mayor had overstepped his authority), the interplay between Lockyer and other marriage equality laws and cases, and whether or not Obergefell, in finding marriage to be a fundamental right, would be applied retroactively."

The decision states that Hwang "had serious credibility issues with the testimony of each of the parties." While King testified the purpose of the 2004 ceremonies was "a form of protest" against unjust laws, the court found based on evidence and testimony that the couple indeed were attempting to solemnize a marriage. Furthermore, an eyewitness contradicted King's testimony that the two did not share a bed after 2006.

In 2005, Hernandez declared bankruptcy, filing as a single person; nonetheless, the court found this may have been simply because federal bankruptcy law did not recognize same-sex marriages at this time.

"While this court leaves open the possibility that perhaps petitioner did not have a good faith belief between her receipt of the Lockyer notice to her knowledge of the Supreme Court decision, it would be entirely reasonable to believe that even if the marriage was temporarily voided, that it was reinstated by the finding that marriage between two lesbians is a fundamental right," the decision states.

In any case, it is without dispute that after 2020 Hernandez understood herself to no longer be married. It was that year that all parties agree Hernandez was notified of the implications of the Lockyer decision.

Horn told the B.A.R. that Hwang's ruling is a "proposed statement of decision. It has not taken effect yet."

Horn and co-counsel Amy Harrington have 15 days to file objections (they plan to file 15, Horn said), at which point the court will consider the objections and institute a final statement of decision.

"We plan to file for immediate appellate review," Horn said. "We are also then going to be seeking a stay."

Could be far-reaching
If Hwang's decision stands, the effects of his ruling could be far-reaching, Horn said, adding that someone could (under the line of argument followed in the court's opinion) claim part of someone's estate as a putative spouse from a marriage invalidated in 2004, or get up to 50% of that person's community property if they are alive.

"This ruling creates incredible chaos for the 8,000+ people who have relied on the [state] Supreme Court's ruling from 2004," Harrington stated in a news release. "It opens the floodgates for former partners to assert community property claims 20 years after they were notified that their marriages were nullified and void from their inception."

Updated, 7/7/21: This article has been updated to include that the judge had credibility issues with both parties in the case.