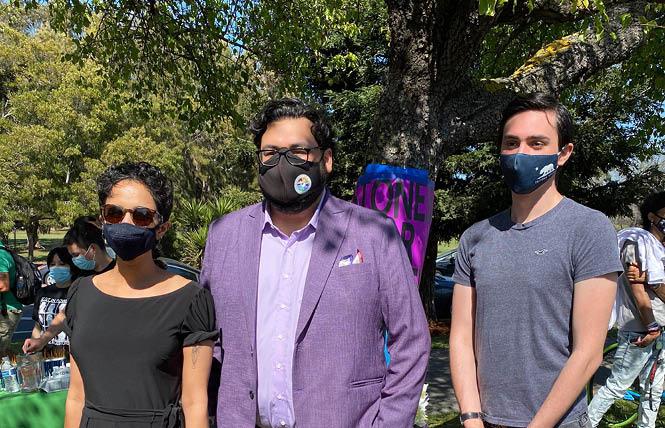 The two gay Democrats who failed to advance past Tuesday's special election for the East Bay's 18th Assembly District seat have both endorsed their former queer opponent Janani Ramachandran. She is headed to the August 31 runoff race for the legislative seat that covers Alameda, San Leandro, and a portion of Oakland.

Ramachandran, 29, a social justice attorney who also identifies as lesbian, continues to hold the second-place spot among the eight candidates who sought the Alameda County seat. Based on the updated vote count released Thursday at 4:39 p.m., she now has 14,006 votes, or 23.65% of the ballots counted. On election night she had 9,303 votes.

Her lead grew over Alameda Vice Mayor Malia Vella, 36, who remains in third place with 10,037 votes, or 17% of the vote, based on the unofficial returns.

Still in first place is Alameda Unified School Board President Mia Bonta with 22,516 votes, or 38% of the total counted so far. In order to have avoided a runoff race, Bonta needed to garner more than 50% of the vote in the June 29 election.

Bonta, 49, a Black Latina, has long been seen as the frontrunner in the race to succeed her husband, Rob Bonta. He resigned earlier this year when Governor Gavin Newsom swore him in as the state's attorney general.

As the Bay Area Reporter noted in a story posted to its website Wednesday, San Leandro Unified School District Board of Education member James Aguilar, 21, that morning endorsed Ramachandran. He had landed in seventh place in the contest, according to the Election Day count.

In the late afternoon yesterday the third out candidate in the contest, San Leandro City Councilman Victor Aguilar Jr., 42, also threw his support behind Ramachandran. No relation to James Aguilar, he ended up in fifth place based on the early returns.

In a tweet announcing she had earned his endorsement, Ramachandran wrote that she was "honored" that Aguilar, "San Leandro's Vice Mayor and fellow LGBTQ progressive champion, has endorsed this fight for justice! I am thrilled to have his support in our runoff on August 31."

In a note to her supporters that she posted to her website, Ramachandran thanked them "for believing in me when the odds were stacked against us. Thank you for believing that our grassroots movement for justice is winnable, because fearless progressive change is what our District wants and deserves."

And she noted that her advancing to the run off race stunned "the political experts who didn't see our grassroots surge coming. Naysers who didn't believe in the strength of people-powered movements. Our campaign has shown that voters agree — we need a fearless progressive fighting for us, not another corporate Democrat who gives in to special interest donors."

She continues to face an uphill climb in winning the seat, as many Democratic Party officials and elected leaders are backing Bonta in the race. She announced Thusday that she had earned endorsements from State Superintendent of Public Instruction Tony Thurmond and Assembly members Buffy Wicks (D-Oakland), Wendy Carrillo (D-Los Angeles), Rebecca Bauer-Kahan (D-Orinda), and Bill Quirk (D-Hayward).

"Our coalition of supporters continues to grow!" she tweeted.

Statewide LGBTQ advocacy organization Equality California last month endorsed both Ramachandran and Bonta. The East Bay Times solely endorsed Ramachandran, who would also be the first LGBTQ state legislator from the East Bay, as did the Bay Area Reporter this month.

County elections officials will next post an update to the current tally by 5 p.m. tomorrow.