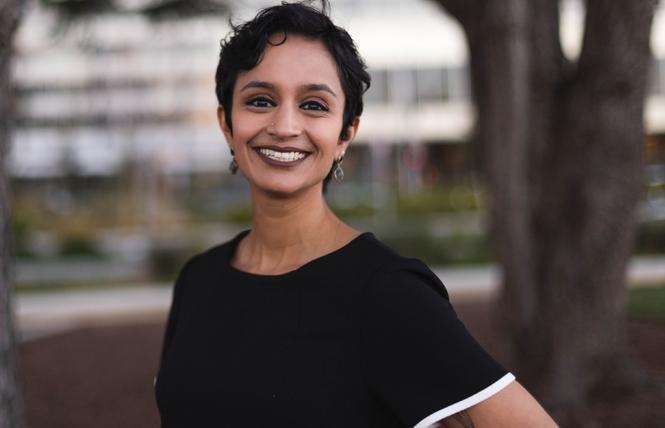 Queer Assembly candidate Janani Ramachandran appears headed to the August 31 runoff race for the East Bay's 18th Assembly District seat. But she will have to wait until Thursday evening to see if her second-place finish in Tuesday's special election holds.

County elections officials still have 13,000 ballots to count and will update the current tally at 5 p.m. Thursday. Ramachandran, 29, a social justice attorney who also identifies as lesbian, currently has 9,303 votes, or 21.6% of those already counted.

Landing in third place based on the unofficial returns is Alameda Vice Mayor Malia Vella, 36, with 7,119 votes, or 16% of the vote. It appears the two candidates were able to hold off Alameda Unified School Board President Mia Bonta from winning the seat outright yesterday.

She currently is in first place with 16,228 votes, or 37.6% of the total counted so far. In order to have avoided a runoff race, Bonta needed to garner more than 50% of the vote in the June 29 election.

"I am energized and motivated to take on the challenges that lie ahead," Bonta tweeted late Tuesday. "Thank you all again for your support. Tonight we celebrate our primary victory, and tomorrow we get back to work!" 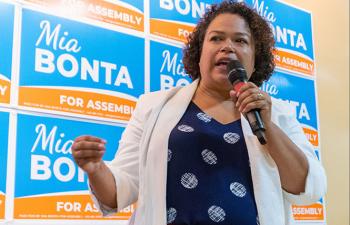 Bonta, 49, a Black Latina, has long been seen as the frontrunner in the race to succeed her husband, Rob Bonta, in the legislative seat that covers Alameda, San Leandro, and a portion of Oakland. He resigned earlier this year when Governor Gavin Newsom swore him in as the state's attorney general.

Statewide LGBTQ advocacy organization Equality California earlier this month endorsed both Ramachandran and Bonta. The East Bay Times solely endorsed Ramachandran, who would also be the first LGBTQ state legislator from the East Bay, as did the Bay Area Reporter this month.

Two gay Democratic men who share a last name but are not related also sought the Assembly seat but were considered long shot candidates. San Leandro City Councilman Victor Aguilar Jr., 42, is in fifth place with 3,218 votes, or 7.46% of the total.

"Throughout the primary, she was unapologetic and fearless in the fight for justice. I'm inspired by her story, her candor. Let's get her through the general and to Sacramento," he tweeted.

In response, Ramachandran tweeted, "I am so honored to have your support! Young progressives are showing up and showing out to make a difference and challenge status quo politics — I love to see it!"