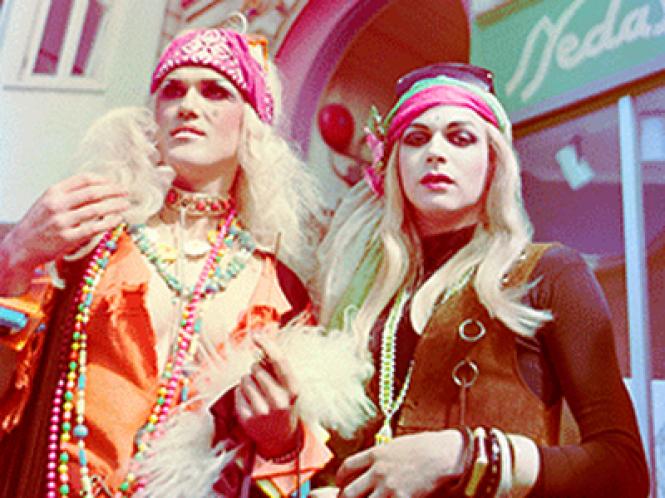 Doris Fish and Tippi at the Haight Street Fair, May 18, 1980  (Source:Daniel Nicoletta)

Roberto Lopez had a very bad night. On August 31, 1958 he stopped by the Whoo Cares at 782 Haight and asked a couple of girls to dance. His request caused a jealous argument among the women and Mr. Lopez wound up surrounded by eight women wielding broken beer bottles on the sidewalk outside the bar. In an article in the San Francisco Chronicle entitled "That Was No Lady, That Was..." from September 1, 1958 the bar was described as being "frequented by many sexual degenerates, lesbians and homosexuals." Regarding the women that attacked Lopez the article says, "some of the women in the group wore men's clothing...others wore pedal pushers."

The Haight had gay bars as far back as the 1950s (the Whoo Cares had been open since 1951). The bar existed at least up through June 1961 when the owners faced revocation of their license because of "cooing and caressing" an officer witnessed between members of the same sex.

In an article in The Chronicle entitled "Whoo Cares?...The Liquor Board," the patrons are described by an investigator in this manner: "The majority of the males affected swishy-hipped walks, limp-wristed gestures and high-pitched voices and wore tight pants. The women were 'mannish.'"

Regarding the case, the attorney for the bar owners, Richard and Sophie Guthrie, said:

"None of the customers are shocked by anything that goes on there. It's only the tourists from the liquor board that are."

The Haight was hopping before the Missouri Mule, the first bar in the Castro, opened in 1963, and it was a gay neighborhood well before the Summer of Love. Bill Plath, one of the founders of the Tavern Guild, opened the D'Oak Room (350 Divisadero at Oak) in February 1962.

In an oral history done by the GLBT Historical Society, he described the bar as, "sort of campy Victorian" atmosphere. In the interview, Plath says that the bar was quite busy, which surprised other bar owners who thought no one would go as far out as Divisadero to drink (most of the city's bars were downtown at the time). It featured nickel beers on Wednesdays and was the first gay bar to advertise an Academy Awards Party (on April 13, 1964). The bureau of Alcohol Beverage Control closed the bar in December, 1964.

By 1964 the neighborhood was already starting to form. My Place at 1784 Haight opened in spring 1963 and featured weekend beer blasts and Sunday buffets.

Bligh's Bounty opened in November 1964 in the same space that had been the Whoo Cares. It featured both gogo boys and drag shows and was fortunate in the timing of its opening. It opened a month before the New Year's Eve drag ball co-sponsored by the Council on Religion and the Homosexual (CRH) that exposed the police harassment of gay people in the city. The lawyers for the CRH were arrested on the night of the ball and after being acquitted they counter-sued the police for damages and won.

Following that victory, police harassment of bars dropped off significantly. Bligh's Bounty remained in business till 1974.

A mainstay of the neighborhood, Bradley's Corner, opened on 900 Cole Street in February 1965. It was a neighborhood bar with a piano and special drink nights (an ad from the time says that Wednesday was Hat Night: "Wear a hat and pay 50 cents for bar drinks.").

Ron Williams, author of San Francisco Native Sissy Son told me, "I was just 21 when I hung out there. Lots of military personnel, both gays and lesbians from the Presidio, frequented the place and played pool. There were beer busts and spaghetti during the week nights."

José Sarria also performed in the neighborhood. The Black Cat closed in 1963 and in 1965, he began performing his operas at Romeo's Pizzeria (1605 Haight). José placed advertisements for his performances in the Business Personals section of The Chronicle (a practice carried over from The Black Cat).

The performances included Carmen, The Merry Widow and Wolf and Peter (the ad noted that it had a cast of 1,000s). José's presence in the neighborhood was particularly noteworthy in that, on Halloween in 1965, he proclaimed himself Empress of San Francisco. Prior to the proclamation he performed "San Francisco" at Romeo's and led a motorcade from there to The Black Cat to lay a wreath in honor of the third anniversary of its closing. Romeo's closed in 1966.

One block down from Romeo's was the Golden Cask (1725 Haight), a bar run by Charlotte Coleman (who would go on to open The Mint in 1968). The Golden Cask was one of the last bars to run into a police attempt to shut it down (in February, 1965). It was particularly well known for its restaurant (in an oral history with the GLBT Historical Society, Bay Area Reporter cofounder Bob Ross mentions that it was a very good restaurant - and as he was also a chef he knew his restaurants).

However, when Coleman opened bars in the Castro and Polk neighborhoods, her attention and energy were drawn away from the Haight and the Golden Cask was closed by 1972.


And Then There's Maud's

Rikki Streicher opened Maud's at 937 Cole (across the street from Bradley's Corner) in October, 1966. Part of the secret to the bar's long life was the care Rikki showed towards the women who came to her bar. In the days before widespread acceptance she would have holiday dinners at the bar. And the bar would go all out on Halloween with performances by notoriously bad singing groups like the Pussies and the Maudettes. Maud's remained a warm and friendly bar until 1989.

Why the Haight didn't outshine the Castro in the '70s with such luminaries and astounding bars and restaurants: In large part that was due to a downturn in the luck of the neighborhood which came after the hippie era which did so much to endear the neighborhood to many. In Season of the Witch by David Talbot, there is a succinct passage which describes this period:

"Life in the Haight grew more violent and disturbing. The drugs got harder. By 1971, 15 percent of the servicemen returning from Vietnam were addicted to heroin."

Still, the neighborhood persevered even through these times. The Question Mark (which had been at 1437 Haight since the '40s) became a gay bar in the early '70s, and in the early '80s changed its name to Trax.

Gus' Pub at 1446 Haight was a bar that incorporated what the Haight had been in the '60s into gay culture.

Mark Abramson, author of many books (including his most recent More Sex Drugs & Disco), said this about the bar:

"What I remember best about Gus' Pub was the outrageous wallpaper. A gay hippie named David Morgus must have done a lot of acid back in the '60s and decided to cover every inch of the walls and ceiling, not just with ordinary wallpaper, but with layers and layers of many different patterns of wallpaper cut out and pieced together in an elaborate mosaic of flowers and patterns and colors.

"Gus' was across the street from another gay bar called the Question Mark, which later became Trax and still exists. I tended bar at Trax for about a decade and remember that we had a huge framed photograph of Gus' Pub inside our front door. It was always so filled with smoke in those days when it was rocking that you could barely see the wallpaper.

"When my friends and I went to Gus', it was to smoke pot in the back yard. I don't think they served anything stronger than beer and wine, so we'd get stoned there and then head across the street to the Question Mark for shots or mixed drinks."

Abramson also mentioned some of the other important bars from that era.

"The I Beam was more my style, and the DeLuxe was new and very trendy for playing pool and cruising in the late '70s."

Sanford Kellman opened the I-Beam in 1977, which was well known for amazing (and packed) Sunday tea dances as well as concerts by groups like Siouxsie and the Banshees, Duran Duran and the Cult. Along with the DeLuxe (which opened in '78 and was gay through the late '80s) it caused something of a gay renaissance in the neighborhood.

But by 1990, The I-Beam was threatened with permit revocation because of noise complaints. Steve Fabus, who was a DJ at the I-Beam from 1978 to1980, told me, "Sound complaints were always a thorn in the I-Beam's side and kept the I-Beam from getting its afterhours permit. It couldn't compete with South of Market clubs that went all night." The club closed for good in 1992.

Ultimately, it was AIDS which would end the gay era in the Haight. A New York Times article from 2010 referred the Haight's gay identity as a "near-forgotten casualty" of the epidemic.

Nearly, but not quite gone, for Trax still remains. The Lower Haight bar Underground SF featured the popular gay Cockfight from 2010 to 2014, and the current weekly Saturday night Hella Tight attracts a queer crowd.

Maud's is remembered annually in a reunion at Finnegans Wake during Pride week. Look closely and you will find that signs of an era that lasted fifty years can still be seen.