LGBT Dreamers left in limbo as bills fail in Senate 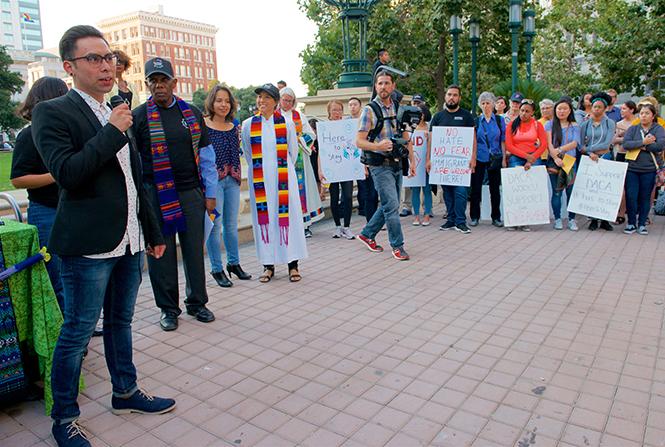 Meanwhile, federal courts continue to block attempts to roll back protections on immigration and sanctuary cities, which the Trump administration has criticized.

Three other bills attempting to bundle those protected under DACA, or Dreamers, with tougher border security, including funding for building a wall, failed February 15. Earlier last week, a bill focused on defunding sanctuary cities also failed to pass the Senate.

Adding to the mix, a federal court judge issued another order to retain DACA protections.

The National Center for Lesbian Rights, working with law firm Gibson Dunn and Crutcher, and a coalition of organizations, filed an amicus brief with the 9th U.S. Circuit Court of Appeals in support of the City and County of San Francisco, et. al. v. Donald J. Trump, et. al.

Meanwhile, hundreds of thousands of Dreamers continue to live in uncertainty and organizations fight to protect sanctuary cities.

LGBT Dreamers
There are an estimated 75,000 LGBT Dreamers in the United States, according to the Williams Institute, a think tank at UCLA School of Law. A majority of those are in California, Texas, Illinois, New York, and Florida.

Like their counterparts, LGBT Dreamers identify as American and have little knowledge of the countries from which their family fled. However, the threat for them goes beyond unfamiliarity of other countries if they are deported. More than 80 countries around the world criminalize homosexuality. Many of the countries hand out harsh punishments - in some cases, the death penalty - for LGBT people. LGBT people aren't treated kindly within the communities in these countries, and oftentimes, they face harassment, discrimination, and violent attacks or are even killed with no justice brought to the perpetrators.

"The consequences of rescinding DACA are particularly dire. Dreamers would be at risk of being deported to countries that they haven't been in since they were children, but their lives would be in jeopardy or they may not have the same set of legal rights as they do in this country," Tyrone Hanley, a gay man who is policy counsel at NCLR's Washington, D.C. office, told the Bay Area Reporter.

He explained that in this political climate, DACA recipient or not, immigrants of various status levels "are really nervous about what's going to happen to them."

"We are hearing from a number of immigrants just in this political climate who are really terrified," said Hanley. "We've been doing our best to really address the concern and to deal with their particular cases in any way that we can," out of NCLR's immigration project at its San Francisco office, he said.

"We're definitely seeing a lot of anxiety and uncertainty for what's going to happen to folks in the future," said Rolfe, who added that center staff has all been trained to work with LGBT immigrants and network to refer them to the right resources on the local level.

On a political level, Rolfe said the center has been actively involved with Equality California's Equality for All coalition that has been working on immigrant rights.

Immigrants are "really being used in some ways as a political pawn," said Rolfe. "It's very frustrating to see this kind of political shenanigans really wreaking havoc in people's lives."

She noted that it's not just Dreamers, undocumented immigrants, and immigrants who are in the U.S. legally who are affected, but also community members who live and work with them.

"These are real lives that are impacted," said Rolfe. "A lot of people in the community are not clear about what their future holds and whether or not they're going to be able to live in a country that they've come to see that is their home and are contributing to in very, very significant ways."

Gay Santa Clara County Supervisor Ken Yeager noted that the South Bay county is proactively addressing the needs of LGBT Dreamers during this time of uncertainty.

"I am proud that our county is proactively addressing the needs of DACA recipients, including those who identify as LGBTQ," he wrote in an email statement to the B.A.R. "We understand the vital contributions made by our immigrant community, which is why we are pleased to provide them with services such as free legal support and a rapid response hotline."

In Washington, D.C., NCLR has been actively lobbying Congress to pass a "clean Dream Act" by speaking with senators on Capitol Hill and participating in joint letter campaigns signed by hundreds of LGBT and ally national and state organizations to representatives.

The ultimate goal would be to pass a bill that would take Dreamers out of limbo and provide them with a pathway to citizenship as well as ensure that Congress would pass significant immigration reform, said Hanley.

Congresswoman Barbara Lee (D-Oakland) is firmly in support of that, but knows the Republicans control Congress.

"Reversing DACA would be counter to everything we stand for as a nation and could put the lives of LGBTQ dreamers in danger if deported back to countries where being gay is punishable by death," said Lee in a statement emailed to the B.A.R. "We are long overdue to secure protections for DACA recipients, who are Americans in every way except on paper. It's past time we pass a clean Dream Act and ensure the safety and security of these young Americans."

It was an attempt to address federal Judge William H. Orrick's decision that the Trump administration's efforts to have local officials to cooperate with its efforts to deport undocumented immigrants violated the separation of powers doctrine as well as the Fifth and 10th amendments, reported the Washington Post. Orrick blocked the president's executive order in November.

San Francisco, Santa Clara, and Richmond filed cases against Trump in the 9th Circuit immediately following Trump's executive order against sanctuary cities. The case is currently in process with the court.

The brief also notes the irreparable economic damage lifting sanctuary city policies would have on local communities that would in effect harm public safety, including preventing potential future terrorist attacks.

Focusing on the undue harm LGBT immigrants would face if sanctuary policies were struck down, NCLR argued that undocumented LGBT immigrants within the U.S. and in their home countries face high instances of violence.

Undocumented LGBT immigrants represent less than 3 percent of the LGBT population, but "experience nearly eight percent of the hate violence perpetrated against the LGBT community," according to a report by American Progress, cited in the brief.

The organizations also noted that, as of 2011, more than 85 countries around the world criminalize homosexuality, and in countries that don't have anti-gay laws, LGBT people still face discrimination and violence.

"The Trump administration has made clear over and over again that he views immigrants as somehow dangerous or people who should be feared, which is precisely the opposite," said Amy Whelan, a gay woman and one of the NCLR attorneys who filed the brief. "If he paid attention to data or actual information he would understand that's not true."

Calling Trump's attacks on immigration, including DACA to sanctuary cities, is "rooted in racism," Whelan said, stating that it was important for NCLR to file this brief to provide a voice for the organization's clients.

"To ensure that a message is out there that we're not going to stand by and see the attacks on the immigrant community happen," said Whelan.

Rolfe said that immigration is an important issue to the community.

Take action
To ask elected officials to support LGBT undocumented youth and to pass a clean Dream Act, send an email to your member of Congress. Visit https://www.house.gov/representatives/find-your-representative to find your congressman or congresswoman. To reach members of Congress by phone, call (202) 225-3121. For senators, call (202) 224-3121.

Members of Congress were back in their districts this week. Only one out of the nine of the Bay Area representatives held a town hall meeting, Congressman Mike Thompson (D-St. Helena) in Napa on Tuesday.

To find a town hall meeting near you, visit https://townhallproject.com.