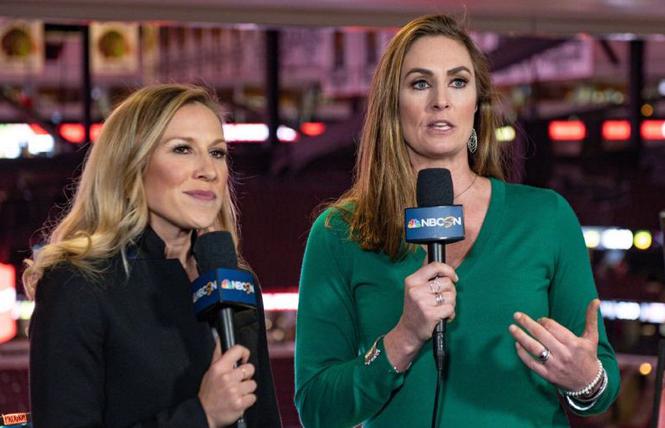 Sports broadcaster Kate Scott told me that she doesn't consider herself a trailblazer.

"I'm in the next wave of trailblazers, building on the work of those who went before me," she said.

Well, trails are blazed by doing things others have not done before, and last Sunday night Scott did just that. On International Women's Day, she was the play-by-play announcer on the first all-women's crew to broadcast a National Hockey League game.

It was also the first time that Scott ever called a hockey game on air.

"The pace of hockey is unreal," Scott said. "It doesn't translate through the television how quick it is. And when you're broadcasting, you're six or stories up, so not only are they fast, they're tiny."

Scott, who used to be a commentator on KNBR, currently works for NBC Sports and the Pac-12 Network, and produces a Bay Area-focused podcast for The Athletic.

"It was amazing," she said. "It went much better than any of us could have expected. I was extremely nervous when they first offered me the opportunity back in February — I was nervous most of that month."

The cure for nerves is confidence, and the best source of confidence is practice. Scott prepared by calling plays for three NHL games before Sunday — play calling that was never broadcast. She also got advice and encouragement from other broadcasters and hockey legends.

In fact, Scott, 36, said she's been blessed with advice and encouragement from others throughout her life. She was close to graduating from Clovis High School in Southern California, expecting to follow a career in teaching, just as her mother had done, when a school counselor, Ed Schmalzel, made a suggestion.

"'I just want to point something out to you,'" Scott quoted Schmalzel as saying. "'You play every sport we have. You do all of the sports announcements in the morning and call the other sports you don't play.' I had never thought that was an option before."

Scott came out as lesbian to her parents in 2004.

"The day I came out to my parents, my mother started crying. I was really surprised. I asked her what's wrong?" Scott said.

Turns out mom was already worried about the challenges her daughter would face as a woman trying to make a career in the male-dominated field of sports — and now worried that her sexual orientation would add another level of concern.

Scott said at that moment, she decided that whenever she felt safe and comfortable in a job, she would be as open as possible, with the chance that might make the difference for other youngsters coming along, struggling with acceptance and self-identity.

She'd been on her job at KNBR for a couple of weeks in 2011 when the occasion arose quite spontaneously. She was already out with some of her on-air co-workers. She hadn't gotten to know former KNBR host Gary Radnich terribly well yet when he got on the topic of issues when one spouse is crazy about sports and the other is not.

"Gary saw the wedding ring on my hand," Scott, who is married to Nicole Everett, said "'Oh, Kate,' he said, "what does your husband think?' I had about one second to think about it. I said, 'Well, Gary, I'm married to a woman.' Gary went silent for a few seconds, and if you know Gary, that's just not him. Then he said, "Oh, that's so glad. I'm glad you're living your truth.'"

And life went on without missing a beat.

Opportunity and experience, practice and execution. It all came together last Sunday in a historic and memorable moment, to blaze the trail a little further along for whoever comes next.

Sports world responds to spread of COVID-19
Across the globe, sports events and organizations are increasingly affected by the spread of the coronavirus, which causes the respiratory disease COVID-19.

>Breaking, 3/11/20: The NBA announced that it was suspending its season, indefinitely, after a player tested positive for coronavirus.

The current health crisis should be under control well before Gay Games XI in late 2022, but it is affecting the way organizers right now are working on plans for the event.

"We have been following the advice from the WHO and the Hong Kong Health Authority to minimize meetings and gatherings," Dennis Philipse, HK2022 founder and co-chair, told the Bay Area Reporter, referring to the World Health Organization. "As we continue our preparation, we communicate through small group meetings and digitally through WhatsApp calls and Google's Hangout meetings. We are launching our new website soon as well as starting pre-registration next quarter."

"As it is two and a half years until the Gay Games, the current situation in Hong Kong should be dealt with by then," Philipse said. "The experiences we have from 2003 SARS and the coronavirus is that Hong Kong will even better equipped on health precautions should anything happen closer to 2022. We will work closely with all relevant parties closer to the Games to ensure all precautions and safety measures are prepared and well organized."

The EuroGames are scheduled for August 6-9 in Dusseldorf, Germany, where currently major events are not allowed to have more than 1,000 people. Event organizers posted a statement on their website (www.eurogames2020.de) this week setting they expect such restrictions will have been resolved long before the event. Organizers said no sport would have more than 1,000 participants so they should be allowed to go on as planned; and planning would continue to make sure ceremonies and other events comply with any restrictions that may be in place at the time of the EuroGames.

Organizers also said that if opening and closing ceremonies cannot be held, participants would be refunded 20 Euros ($22.67) of their base registration fee. If the EuroGames have to be canceled entirely, participants would receive full refunds, minus costs. Organizers said they estimated such refunds would be about 70% of the original fee.

The San Jose Sharks will have to decide by their next home game — Thursday, March 19 — how to proceed now that the Santa Clara County health department has banned gatherings of more than 1,000 individuals through the end of March. As of press time, options included moving the location or playing games without fans in the SAP Center stands, as many European sports programs are already doing. The Sharks have three home games in March, and the San Jose Earthquakes have a home match against Kansas City. The minor league hockey San Jose Barracuda were scheduled to have home games — Tuesday, March 17 against the Colorado Eagles, and Sunday, March 22, against the Bakersfield Condors — so those SAP Center games are likely to be affected as well.

Following San Francisco's two-week ban announced Wednesday on all gatherings of more than 1,000 people, the San Francisco Giants said they would cancel their March 24 exhibition game against the Oakland A's at Oracle Park. The Golden State Warriors said they would play their home game against the New Jersey Nets at the Chase Center Thursday, March 12, with no fans in the stands. The team did not immediately say what it would do about its home game March 25 against the Atlanta Hawks, which is followed by three more home games in March.

The NCAA said Wednesday that national championship tournaments, including the men's and women's basketball tournament, would be played without fans present.

The NHL, NBA, MLS, and MLB have closed their clubhouses and locker rooms to reporters and advised players not to sign autographs.

Italy, one of the countries hardest hit by the virus, has closed down all sports events through April 3.

California high school boys basketball was affected when the Elk Grove Unified School District closed down all of its schools for this week. Included in the suspension was Sheldon High School, a two-time Northern California Open champion. Sheldon had been scheduled to open the state playoffs this week with a game against Dublin at Cosumnes River College in Sacramento. After that game was canceled, a meeting of angry parents and district administrators led to the game being reinstated, but moved to Dublin.

Me? I was very excited about the chance to coach middle school kids this month and next in Berkeley in a transformative values-based Beat the Streets wrestling program. But being a 66-year-old person with a bad heart and on post-transplant medications that serve to suppress my immune system, I am the ultimate representation of the at-risk population. Huge bummer.

Basketball game marred by homophobic taunts
During a regular season ending men's basketball game at Monmouth University, a group of Monmouth fans taunted a Siena player by holding up images of his Grindr account and a sign telling him to "Stick to Grindr."

Monmouth University administrators said they were investigating the March 6 incident.

It was not immediately known what the Monmouth student who discovered the Siena player's profile on Grindr was doing on the gay dating app at the time of the discovery. Maybe he was looking for a date with Aaron Schock, the Republican former congressman who recently came out as gay.