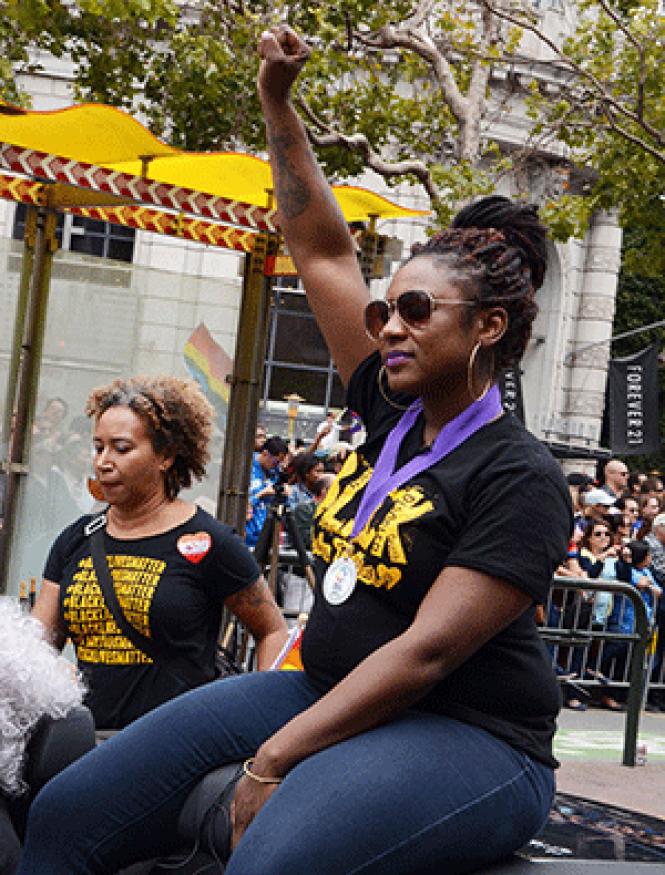 Black Lives Matter is more than a trending hashtag or a slogan. In the last few years it has become a movement that resonates with African-Americans due to their experiences with police brutality. And it has become a powerful rallying point for both blacks and their allies.

It initially gained prominence after a killing that didn't involve law enforcement, but rather an acquittal in the shooting death of an unarmed, black teenager.

According to its website, Black Lives Matter is a chapter-based national organization working for the validity of African-American life.

In keeping with the theme of this year's San Francisco LGBT Pride parade, "For Racial and Economic Justice," Black Lives Matter was named organizational grand marshal in public voting earlier this year.

Police violence against African-Americans isn't a new phenomenon, but social media and smartphones, aided by video, have helped bring national attention to numerous incidents of mistreatment and misconduct.

Black Lives Matter originated in the U.S. in 2013. The #BlackLivesMatter hashtag trended on Twitter after George Zimmerman, who was involved with a neighborhood watch program in his Florida community, was acquitted in the killing of Trayvon Martin, an African-American teenager.

Since then, it has gained popularity. Most law enforcement personnel have neither been indicted nor fired in the aftermath of incidents, sparking protests and calls for reform and accountability.

Black Lives Matter was co-founded by Alicia Garza, Patrisse Kahn-Cullors, and Opal Tometi. Garza, a queer Bay Area woman, and the others were honored earlier this year by the National Center for Lesbian Rights.

The Black Lives Matter network, which was accelerated by organizers and activists in Ferguson, Missouri after police shot unarmed teenager Michael Brown in 2014, spurred a broader movement and promulgated an international conversation about anti-black racism, American democracy, and the experiences of black people across the globe.

Local leaders didn't respond to the Bay Area Reporter 's request for interviews for this story, but at the NCLR gala, Garza said that Black Lives Matter is an ideological and political intervention in a world where black lives are systematically and intentionally targeted for demise.

"It is an affirmation of black folks' contributions to this society, our humanity, and our resilience in the face of deadly oppression," Garza, who was a community grand marshal at last year's SF Pride, said at the NCLR gala.

In addition to Brown's killing, Black Lives Matter became nationally recognized for its street demonstrations after other high-profile incidents, including Eric Garner, who died July 17, 2014 in Staten Island, after a New York City Police Department officer put him in what has been described as a chokehold while arresting him. The event was caught on camera. Garner's cries of "I can't breathe" became a rallying cry.

Last year, Freddie Carlos Gray Jr., 25, an African-American man, was arrested by the Baltimore Police Department for possessing what the police alleged was an illegal switchblade. While being transported in a police van, Gray suffered a severe spinal cord injury and fell into a coma. He died April 19, 2015.