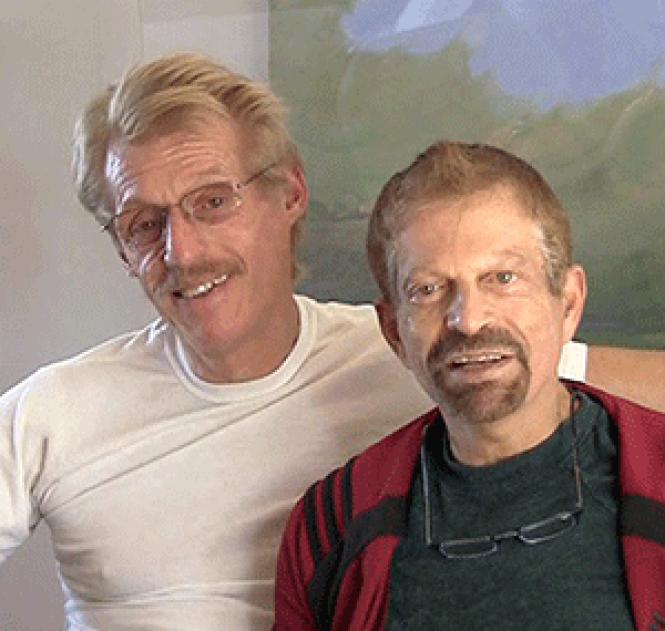 Tom Taylor and Jerome Goldstein have provided many years
of service to the LGBTQ community. Photo: Courtesy Tom Taylor

A San Francisco couple who annually turn their front yard into a winter wonderland that draws people from around the area will be honored by the San Francisco Pride board for their years of service to the LGBTQ community.

Tom Taylor and Jerome "Jerry" Goldstein have been together since 1973. They've become icons in the community, not only for the lifelong love they've shared with each other, but for their consecutive years of service to others. Longtime HIV survivors, they were told to prepare for death in 1983. Three decades later, in October 2013, they were married in a glorious ceremony performed in front of their Dolores Heights home – no less than comedy legend Bruce Vilanch introduced the couple to wedding guests, who then celebrated with a block party.

But it's the holiday season for which they are best known. The home they share has become a Christmas destination for people all over the Bay Area. Taylor and Goldstein recreate Santa's Workshop and the North Pole on their front lawn every year – at night the lights from the hilltop abode are visible for many miles. This incomparable display is now simply known as Tom and Jerry's Christmas Tree, as the star attraction is a decorated 65 foot tall Norfolk Island pine.

They said that they first started the holiday tradition 26 years ago.

Taylor and Goldstein's legacy goes far beyond Christmas lights. When the 2015 Pride parade commences Sunday, June 28, Taylor, 71, and Goldstein, 73, will participate as recipients of the San Francisco LGBT Pride Celebration Committee board's Heritage of Pride, 10 Years of Service Award. According to SF Pride officials, the award honors "those organizations, individuals, or other entities that have contributed 10 years of consecutive service to the LGBTQ community."

The men said their home was the site of meetings and fundraisers for a variety of LGBT organizations over the years.

"We have hosted at our home the San Francisco AIDS Foundation's initial meetings, Project Open Hand; the San Francisco Lesbian/Gay Freedom Band; IGLA, the International Lesbian and Gay Association; and fundraisers for many organizations dedicated to the diversity of San Francisco," Goldstein told the B.A.R.

They also hosted an AIDS support group for many years.

Goldstein explained the couple's philosophy of community service. "Creating lasting and sustainable benefits to the community," he said.

Projects that have benefited from the Diversity Foundation include repairs for the gay freedom band's hats and new lighting for the rainbow flag that flies at the corner of Castro and Market streets.

Taylor is the man in charge of that iconic flag, which greets visitors as they approach the "gayborhood."

"The foundation also supports all the rainbow flags that adorn Market Street during Pride," said Goldstein.

The couple couldn't be happier about all that they've done, and the Pride recognition.

"We were surprised and pleased to receive the 10-year award," said Goldstein. "We chuckled at the 10-year mark. Our activism began in the 1970s when the gay community faced the 'orange juice crisis' and Anita Bryant and the hate directed toward gay teachers in the classroom. We marched against that."

Bryant was a beauty pageant winner and orange juice spokeswoman who was instrumental in getting a gay rights ordinance repealed in Florida. In California in the late 1970s, state Senator John Briggs campaigned for the passage of a law, nicknamed the Briggs initiative, that would have barred gay men and lesbians from teaching in California schools. Supervisor Harvey Milk campaigned heavily against the measure, which was defeated just weeks before Milk was assassinated in November 1978.

Decades later Taylor and Goldstein are still in love. They continue to serve the community that means so much to them both.