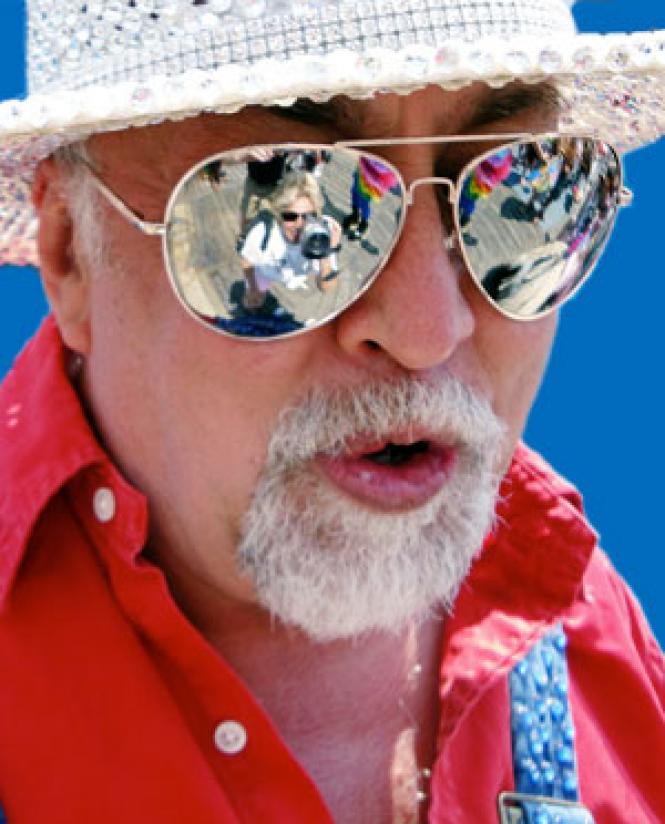 Rainbow flags are reflected in Gilbert Baker's sunglasses
in this photo from 2010. (Photo: Charley Beal)

Gilbert Baker is going to be quite a busy guy when he returns to San Francisco for Pride 2012. The artist and former Sister of Perpetual Indulgence will be the first recipient of a new award given by the San Francisco LGBT Pride Celebration Committee: The Gilbert Baker Pride Founders Award.

The award will be presented to Baker on the main stage Sunday, June 24.

"It's a really cool honor," Baker said in a telephone interview from his home in New York City. "I'm humbled, thank you. I'll be acknowledging some of my friends that day who share in the honor."

It's an incredible comeback for Baker, 61, who revealed that he suffered a stroke about a year ago.

"It really fucked me up. For three months I couldn't see or walk," he said. "I'm a strong guy and I recovered, but it changed me. It made me think about dying, it gave me pause to think that every life is finite. It made me appreciate the ones who came before me who did so much great work."

Sometimes referred to as the gay Betsy Ross, Baker is best known as the designer of the rainbow flag, which made its debut on June 25, 1978 at what was then called the San Francisco Gay Freedom Day Parade. Harvey Milk, who had been sworn in six months earlier as the city's first openly gay supervisor, rode under the flags.

"I thought it was an incredible image," he recalled. "I thought it would be an iconic image. You can't really design a flag; a flag is from the soul of a people. We own it, that's what gives it its power. It means so much to people all over the world â€" it's in the National Gallery of Ireland."

His explanation for why he chose a rainbow design is simple, yet eloquent.

"It fits us," he explained. "We're all the colors, all the sexes, all the genders. Infinite people. Infinite colors."

Baker revealed that he had mixed feelings about his time with the Sisters of Perpetual Indulgence, where he was known as Sister Chanel 2001.

"At first it was glamorous and political," he said. "But when the Sisters became more organized, I became a tool of the right wing and raised money for Jerry Falwell so I stopped."

Years earlier, Baker had marched in SF Pride as Pink Jesus. Dressed in a loincloth, with his body painted pink, he also sported a pink cross.

"You are responsible for what you do and say," he said. "The Moral Majority took a picture of Pink Jesus and used it as a tool that I had no control over â€" they raised millions to stop the gay agenda with that picture. That made me wake up. When you do a piece of art it can be used against you."

Baker recalled Milk, who was a friend, as "a hard person to know. He was gregarious, funny, a communicator. But a lonely guy underneath. He knew his destiny, which puts a person in a dark place. He knew that what he was doing was going to have consequences."

Milk was assassinated with then-Mayor George Moscone in November 1978, just five months after the parade.

Baker gave high marks to Gus Van Sant's 2008 film Milk , in which he had a cameo. "The film has had an incredible life. It brought a part of our history to a global audience. It took 19 years to make that film â€" I made them take down the rainbow flags around the Castro because they weren't up yet in the 1970s."

Still very political, Baker urges all LGBT people to support the re-election campaign of President Barack Obama. He has strong words for those who don't.

"You're stupid, greedy, and evil," he said. "You're not really gay, you're a Republican."

Baker said that the president "stuck his neck out," with his announcement last month that he supports same-sex marriage.

"We have to have more than courage. It takes a fight. They will always want to destroy us," Baker said of those opposed to equal rights.