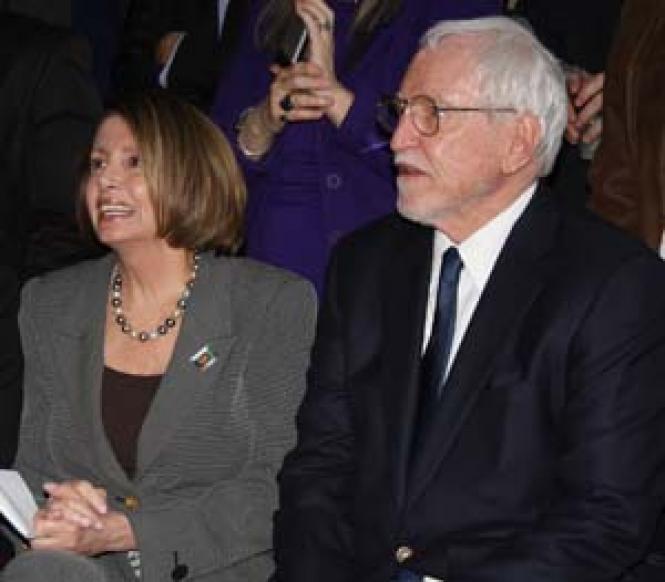 Former Ambassador James C. Hormel was the first openly gay person to hold the diplomatic post when he served in Luxembourg.

"It's lovely," Hormel, 77, said of the Pride recognition. "I don't quite know what to say. There are a lot people of who have achieved a lot of things in their lifetimes, and I'm very honored."

He added, "Maybe my lifetime is a little longer than some others," and he recalled the people who are "no longer with us."

Those people "might be leaders if they had survived the pandemic," he said, referring to AIDS, which wiped out a generation of gay men.

For many years, Hormel has been a philanthropist and has generously supported LGBT and social justice organizations. The James C. Hormel Gay and Lesbian Center at the San Francisco Public Library is named after him. He is an heir to the Hormel meatpacking fortune.

He attended his first San Francisco Pride more than 30 years ago, and said the parade and celebration have "taken on a different meaning as time has passed."

Unlike in the parade's early days, today "there's really a critical mass of gay and lesbian elected officials around the country, in small and large states and small and large cities," said Hormel.

In addition to his philanthropic work, Hormel is active in Democratic politics. He was with House Speaker Nancy Pelosi (D-San Francisco) when she spoke to leaders at the LGBT Community Center on the eve of Harvey Milk day last month.

"I know Speaker Pelosi is here for us and will do what is possible in this Congress to move us forward," Hormel told the crowd.

"What continues to be important is that we remind ourselves that we are worthy of first-class citizenship, that we have not yet received it, and that it is not going to be just given to us, and that we must pursue it," Hormel said.

Hormel added, "I think that the parade serves to remind us of a lot of things about ourselves, that we are all-inclusive, that we encompass all aspects of our society, and that things that we do matter in this universe. We sometimes need to remind ourselves because the general public isn't so likely to just volunteer that information."

Hormel's diplomatic path wasn't easy. In 1999, then-President Bill Clinton appointed him as the country's ambassador to Luxembourg during a recess of the Senate, which had refused to confirm Hormel due to his sexual orientation.

Hormel went on to serve with distinction until 2001. Since then, there have been two other openly gay ambassadors. Michael Guest was appointed by President George W. Bush as ambassador to Romania; he resigned in 2007. Last year, President Barack Obama named David Huebner ambassador to New Zealand and Samoa.

Hormel remains active in other projects as well.

Currently, Hormel said, "I'm still working on a book which will relate to my own experience in trying to get through the Senate confirmation process for ambassadorial appointment."

He said he also continues to be "very much involved in philanthropic and political activities, mainly around issues of social justice," although LGBT issues are a "primary" concern.