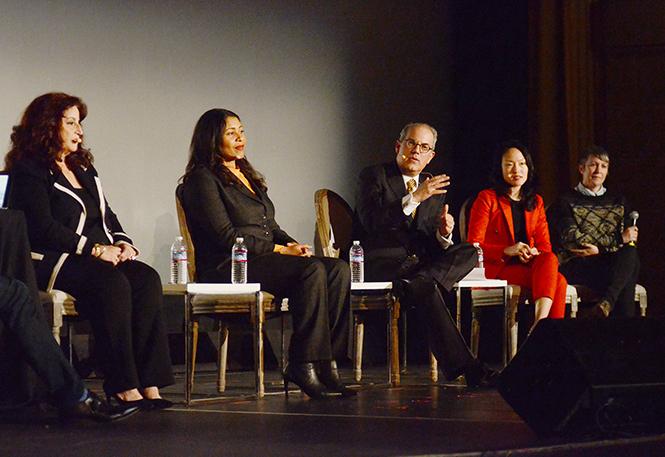 At Monday night's mayoral forum at the Castro Theatre, gay former state lawmaker and city supervisor Mark Leno was a no-show. He informed the organizers roughly 90 minutes prior to the start of the forum that he would not be in attendance due to injuring his right eye.

Leno did not respond the next day to a request for comment from the Bay Area Reporter about his missing the event and the nature of his injury. In a statement his campaign said the injury was "an isolated incident, and Senator Leno is recovering. He has participated in dozens of debates, forums, and interviews already and looks forward to continuing his engagement in future events."

His campaign announced Tuesday morning that Leno would attend a dinner event that night being held by leaders of the city's Chinese-American community who are supporting his candidacy. Wednesday afternoon he was in the Castro with LGBT leaders to release his first television ad.

Leno's was not the only noticeable absence at the March 19 forum, which was co-hosted by the B.A.R., KQED, and Horizons Foundation, an LGBT philanthropic grant-making organization. Despite being billed as focused on LGBT issues, gay moderator Scott Shafer with KQED focused most of his questions on topics not directly related to LGBT concerns.

"There was virtually nothing about the LGBT or Castro community except for one question about the AIDS emergency and tragedy. But besides that there was only gay-adjacent questions. I thought it was a very big disappointment," said Republican candidate Richie Greenberg, one of five mayoral candidates who ended up taking part in the forum.

Greenberg had walked the city's gay business district earlier in the day to hear merchants' concerns. He had also prepared extensively for the forum by conferring with members of the city's Log Cabin Republicans, an LGBT political club that has endorsed him in the race. His gay brother-in-law, who is involved in the local Republican Party in New Orleans where he lives, is a Log Cabin member and partly inspired Greenberg's decision to seek Room 200 at City Hall.

"I tried to add to one of my answers that I wish today's technology and medicine had been around earlier to be able to save all those who had died years before from AIDS. I was able to say that with PrEP, I want to make sure the community has that available to them," said Greenberg, referring to the once-a-day medication that studies have found can prevent the transmission of HIV if taken as prescribed.

Horizons Foundation Executive Director Roger Doherty told the B.A.R. immediately after Monday's forum he wasn't sure why there was a dearth of LGBT-specific questions. Overall, he said he was pleased to see more than 1,000 people turn out for the forum.

"I am glad we had the opportunity to partner with the B.A.R. and KQED to bring something to the community where they could hear about the issues and hear directly from the candidates. Even if the questions were not all LGBTQ-specific, the candidates knew who they were talking to," said Doherty. "When a community fills up a theater like that, it shows it cares about the issues and cares about who wins."

Susan Christian, a former co-chair of the city's Alice B. Toklas LGBT Democratic Club, told the B.A.R. she was "disappointed" that Leno was unable to make the debate, as she was looking forward to hearing his plans.

"I wish there had been more details," said Christian.

The special mayoral election on the June 5 primary ballot is to serve out the remainder of the term of the late mayor Ed Lee, who died unexpectedly in December. Whoever wins will serve through January 8, 2020 and will need to run for a full four-year term on the November 2019 ballot.

The personal and political

At the forum former supervisor Angela Alioto, a civil rights attorney who twice before has run for mayor, had some of the best lines of the night, especially when she parried with Greenberg during a section where the candidates could ask one another a direct question. When he asked why, after being out of office for more than two decades and people not very familiar with her or her name, she was now running to be mayor, Alioto shot back, "I am never out of the spotlight."

And later, when Greenberg said Alioto would be his second choice for mayor under the city's instant voter runoff system, she quipped, "Wait, I thought you don't remember me."

Earlier, Alioto had also gotten in a dig at Shafer when he suggested a poet's piazza she has spent years advocating be built in North Beach had been rejected by the city.

"The piazza is not dead. You are misinformed," Alioto told Shafer.

Of all the candidates, Alioto most remarked on her past work on LGBT issues, from addressing AIDS during the early days of the epidemic to supporting domestic partner benefits prior to the fight for same-sex marriage. She pledged if elected mayor to ensure that the LGBT community, minority communities, and others can remain in the city.

"You need to have coalitions to make sure San Francisco keeps its cultural diversity," said Alioto.

Board of Supervisors President London Breed faced taunts from a handful of protesters yelling that she "doesn't care about black people." On stage, Breed referenced how she served for six weeks as the city's acting mayor this winter upon Lee's death. A majority of her board colleagues in late January, however, selected former District 2 supervisor Mark Farrell to serve as mayor until the results of the June election are finalized.

"I am proud to have led the city and I am proud of the work I did," said Breed.

She spoke of her support for opening safe injection sites in the city for intravenous drug users as one of the more controversial policy stances she has taken while on the board. And she spoke of how, as an African-American woman who grew up in the city's public housing, it is painful not to be given credit for her own hard work to achieve her professional and political goals.

"I find it really offensive when someone like me succeeds in a position like this and it is attributed to someone else," said Breed, referring to claims she is a puppet of wealthy, white, tech executives.

Her plan, she said, "is to be a mayor for all San Franciscans. Not to continue to divide the city as some have done."

Like the other candidates, Breed said a top concern for her as mayor will be to address the city's lack of affordable housing.

"It is all about housing," said Breed, noting she passed legislation ensuring newly built below-market-rate units go to people living nearby. "I want to make sure the housing laws we create work for the residents of the city."

District 6 Supervisor Jane Kim plugged her fight to make City College free for city residents and securing more affordable housing in market-rate developments in the South of Market neighborhood she represents. Of all the board members over the last seven years, Kim claimed to have secured the most affordable housing units.

And she defended her stance that owners of luxury homes and apartments in the city should be taxed in order to generate money for city services and programs.

"Our real estate market is out of control and they should contribute back," said Kim. "We should ask the people who have done well off our work to give back and to support the working class and middle class."

The night began, in typical San Francisco political fashion, with catcalls from the crowd and mayoral candidate Amy Farah Weiss, a queer nonbinary Democrat, bum rushing the stage. Because she has yet to poll at or above 5 percent, Weiss was not invited to take part in the debate.

She showed up anyway, and after eluding security officers, made her way on stage. Shafer and Horizons staff offered her five minutes to address the audience, but they soon relented and allowed her to remain. The decision elicited loud booing from the audience.

Standing next to Kim at first for the start of the debate, Weiss eventually was given a chair to sit in. The advocate for affordable housing development spoke about her plan to house individuals living in tent encampments around the city.

"I am the grassroots candidate with actionable solutions," said Weiss.