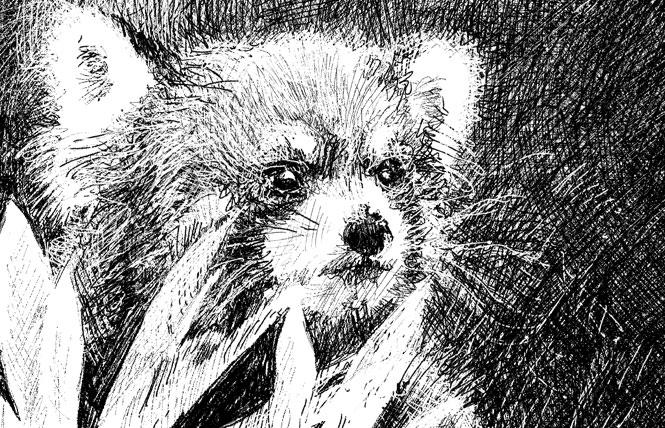 Like so many others, I recently sat down to watch the new Pixar movie, "Turning Red." For those who may not be aware of the film, it is a coming-of-age movie about Meilin "Mei" Lee, a 13-year-old Chinese Canadian girl growing up in Toronto in 2002. The movie blends fantastical elements into the mix, with Lee transforming into a giant red panda whenever her emotions rise.

The story also gives a pretty accurate portrayal of a young teen's life and crushes, and while not entirely a metaphor for menstruation, it does treat the topic with an honesty not seen in a lot of animated fare, let alone one with the Disney name attached.

Yes, that Disney, the one recently, rightfully criticized for its toothless, ham-fisted response to Florida's House Bill 1557, aka the "Don't Say Gay" bill, currently awaiting the signature of Florida Governor Ron DeSantis (R). While Disney CEO Bob Chapek spoke out against the bill in an internal staff memo, he has not publicly condemned the legislation, according to reports. The Guardian reported that has led to staged walkouts by employees. The company employs more than 75,000 staff members in Florida, including at Walt Disney World in Orlando.

This has led to a lot of critiques over the way Disney has courted the LGBTQ community, even while tiptoeing around LGBTQ content and donating to anti-LGBTQ politicians such as DeSantis and other Florida Republicans. According to Politico, the company did recently state it would stop campaign donations to Florida politicians over the Don't Say Gay bill.

At any rate, "Turning Red" opened via Disney+ to largely positive reviews from film critics. It has already made $8.4 millions for the mouse, and broke the global viewership opening record for the fledgling streaming service.

At the same time, it has faced some searing reviews from a number of viewers, who took to the usual parts of the internet to complain. Many saw the movie's approach to menstruation, as well as the depiction of starry-eyed Lee and her friends toward numerous crushes over the course of the film, as somehow inappropriate for a young audience.

The general theme of much of these reviews can be summed up by Rotten Tomatoes user Jeana O, who was "shocked for the huge emphasis on periods and sexual obsessiveness with boys (not something this audience is even thinking about right now and doesn't need to be concerned about)."

This is, of course, where I see a comparison between "Turning Red" and the issue of Don't Say Gay bills, the onslaught of other bills across the country pushing back on trans rights, particularly among trans youth, and even fights over libraries carrying books that have somehow been labeled as inappropriate under the bogeyman of critical race theory. (Critical race theory, as Education Week noted in an online explainer, is an academic concept that is more than 40 years old. The core idea is that race is a social construct, and that racism is not merely the product of individual bias or prejudice, but also something embedded in legal systems and policies.)

One of the big arguments against trans rights over the last few years — setting aside the mythology of the trans "bathroom predator" and the "trans woman dominating women's sports" — has been that young, impressionable girls are somehow being seduced and "groomed" into becoming transgender men.

The use of "grooming" language should be familiar to anyone who recalls the battles over gay rights in the Anita Bryant years, as arguments then were that gays and lesbians have to prey on young children in order to "recruit" to their ranks. It was a deliberate way to tie the gay and lesbian community to underage sex trafficking then, and the same implications are implied today.

The proponents of Florida's HB 1557 would tell you that they are trying to prevent kids who are in kindergarten through third grade from being exposed to content that is not age-appropriate, but we have heard this song before as well. With an emphasis on limiting "discussions of sexual orientation and gender identity," we know exactly who will be most affected. It will not be straight or cisgender discussions affected, but even the most innocent references to LGBTQ people will be frozen out.

Indeed, much like the aforementioned review of "Turning Red," the belief will be that this isn't a topic children should be thinking of or discussing, ignoring the fact that the kids themselves may be questioning how they fit in, and treating these topics as taboo will only reinforce shame and hurt for these very children.

In the era I was coming of age, the only depictions of transgender people like myself were in the tabloids and adult magazines. It was nothing discussed as a normal part of humanity, but was only to be viewed as freakish.

In "Turning Red," Lee feels like a freak and an outcast when she first turns into a red panda. She fears ostracism from her friends, knowing this transformation is treated as a dark secret with her mother and other female family members.

Suddenly, this movie feels like something other than just a metaphor for coming of age as a 13-year-old girl, and hits how I felt as a 13-year-old trans teen realizing that her own dark secrets could lead to something more than merely social suicide.

This notion that allowing such information, to borrow from Jeana O's review above, is not something that children are thinking about and don't need to be concerned about, is foolish. This kid knew she didn't fit into the gender box she was assumed to be in even from before she waved goodbye to her parents on her first day of kindergarten. Having the rudimentary idea that this happens, rarely, and is a normal — if uncommon — situation would have provided a lot of comfort.

It's bills like HB 1557 that wish to doom such on all of us. It seeks to prevent students from obtaining vital information about who they are.

I feel that its proponents hope that, by withholding such information, their kids will not eventually come out as LGBTQ. Out of sight, out of mind, if you will. Yet, I also know there are likely just as many who support such bills knowing full well they could lead to an increase in self-harm and suicide — and applauding that.

Life is not a movie, not even one as adorable as "Turning Red," and young LGBTQ kids deserve a fighting chance in this world.