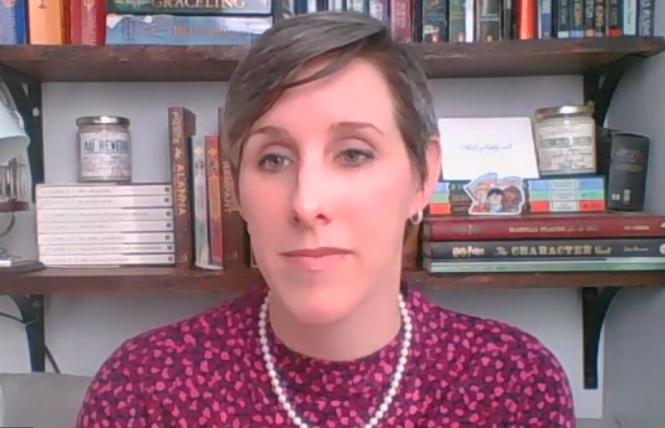 The Human Rights Campaign sounded the alarm about anti-transgender legislation in statehouses coast-to-coast during a recent news conference.

"These bills are not designed to solve a problem," Alphonso David, a gay man who is HRC's president, said at the outset of the January 28 virtual event, which was billed as a preview of the 2021 legislative landscape. "Like the bathroom bills, they are being passed to score political points. ... They lost on marriage, they lost on the bathroom bills and they will lose here as well."

Of particular concern to David is House Bill 112 in Montana, which is advancing in the Treasure State's House of Representatives. The bill — which bisexual and queer HRC state legislative director Cathryn Oakley cited as among the most dangerous in the country — would prohibit trans women and girls from female school sports teams.

The bill passed a second reading in the Montana House in a 62-38 vote January 25, according to the Montana Free Press. It was introduced by Republican state Representative John Fuller alongside HB 113, which narrowly failed in the House 51-49 on January 26.

If it had become law, HB 113 would have banned gender-affirming care to trans youth, such as puberty blockers.

The Montana American Civil Liberties Union came out strongly against both measures in a January 22 statement.

"If passed into law, HB 112 and HB 113 will cause irrevocable harm to trans youth," Caitlin Borgmann, the executive director of the Montana ACLU, stated. "As these bills move to the floor of the House, we hope lawmakers listen to Montana business leaders, medical professionals and associations, religious leaders, parents, and trans youth and oppose these harmful bills. If these discriminatory bills pass — we will sue, and we will win. Trying to defend laws in court that stigmatize and target trans youth doesn't seem like a good use of taxpayer dollars to us."

Fuller did not respond to a request for comment by press time.

While HB 113 is probably dead for now, Oakley emphasized that many anti-trans bills reappear over the years and across states. It was one of a number of bills introduced in recent years that represents a new trend in anti-trans legislation.

In 2015, a number of anti-trans bills began to be introduced across the country, Oakley said, in the wake of the U.S. Supreme Court's definitive decision in Obergefell v. Hodges that there exists a right to same-sex marriage in the Constitution.

"When the idea of whether marriage was a good idea was no longer contested, we saw what began as a real influx of anti-LGBTQ legislation," Oakley said. "This trend of trying to target trans people really came to the fore and, unfortunately, that has continued."

Originally, many of these bills were focused on banning the use of bathrooms and locker rooms by trans people based on how they identify. But the loss of business and decline in reputation faced by North Carolina after its version of a bathroom ban, HB 2, was passed (the bathroom portion of the law was subsequently repealed) led to the emergence of different kinds of bills.

The three trending types of anti-trans bills, Oakley said, are anti-transgender sports bills that prohibit trans youth from participating in sports in ways consistent with their gender identity; bills that make it more difficult for trans people to update their birth certificates, driver's licenses, and other identity documents; and bills that penalize doctors who provide hormone therapy, puberty blockers, and, sometimes, mental health care to trans youth.

"This is one of the newer trends," Oakley said of the latter. "We've only seen these the last couple of years and they are trying to insert themselves between trans youth and their doctors."

But even bathroom bills made something of a comeback during the 2020 election year, Oakley said. According to HRC statistics, 185 "bad bills" were introduced in 2020, compared to 102 in 2019.

States that pass anti-trans legislation not only suffer a loss of revenue from out-of-state (The Associated Press estimates North Carolina lost some $3.76 billion from the fallout of HB 2), but often face lawsuits that render the legislation unenforceable.

(San Francisco and the state of California each have a list of states where taxpayer-funded travel is banned by public employees unless it's an emergency. San Francisco also prohibits contracts with businesses based in those states.)

Such a lawsuit happened in Idaho last August, as Oakley explained and as this column previously reported.

In F.V. v. Jeppesen, Judge Candy W. Dale of the United States District Court for the District of Idaho ruled that HB 509 — which was passed by the Idaho Legislature and signed into law by Republican Governor Brad Little — violates a 2018 ruling from the district court stating that the Idaho Department of Health and Welfare cannot deny trans people the right to change their name on their birth certificates.

Meanwhile, in Hecox v. Little, a federal judge granted an injunction against the enforcement of a ban on transgender athletes from participating in student sports.

"So why are politicians doing this?" Oakley asked rhetorically. "It's just the same old, same old: the newest front for the same old attacks. They know they are on the wrong side of history and are losing ground."

Oakley cited statistics that in battleground states, Republican voters in modern times are more likely to feel less favorable to a candidate if they discover the candidate holds views contrary to LGBTQ rights, and are more likely to feel more favorable to a candidate they feel holds views supportive of LGBTQ rights (though in no state was the percentage who replied it 'made no difference' lower than 55%, which is the case in North Carolina).

Oakley and David allege that the anti-trans bills are part of a coordinated effort from anti-LGBTQ organizations, listing in particular the Heritage Foundation, the Alliance Defending Freedom, and the American Principles Project. (None of these three organizations responded to requests for comment by press time.)

The Heritage Foundation "hosted a summit on 'protecting children from sexualization,' which advocated for anti-transgender policies and was attended by legislators who introduced anti-trans policies," an HRC presentation slide stated.

The American Principles Project "spent more than $3 million on a paid media campaign pushing anti-trans sports and medical narratives during the 2020 campaign," the slide noted.

A cursory look at the American Principles Project's website reveals commercials with misleading or untrue claims, such as one implying that President Joe Biden supports gender confirmation surgery for second graders by taking a quote out of context.

Banning puberty blockers, Oakley said, makes it harder for trans youth to be able to make free choices about whether to have surgery going forward — which some say is the goal of banning them, Oakley added.

But while the Montana bills are currently the worst on offer, in Oakley's opinion, there may be other bad ones down the road.

"Even if these bills don't pass, they're doing real damage to trans youth. It sends a message that they are not welcome and that the legislature would go out of its way to hurt [you]," Oakley said. "I suspect the scariest of the bills this year haven't been introduced yet."